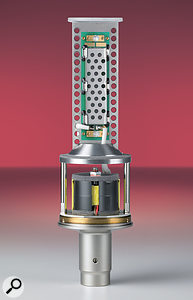 A peep inside the AT4080 reveals the ribbon elements and the chunky transformer beneath.

With the current resurgence of interest in ribbon microphones, it comes as no surprise that an established mic company like Audio Technica are adding quality ribbon models, which should attract the project-studio owner, to their range. Traditional ribbon mics (and many newer models, come to that) are very fragile in comparison with their capacitor and dynamic counterparts, so Audio Technica's engineers set themselves the task of creating a more mechanically robust ribbon element that was still capable of delivering the familiar sonic character of a ribbon. Like other manufacturers, they've also tried to increase the output level by adding active circuitry, because traditional, passive ribbon mics tend to need a lot of preamp gain, which in turn can lead to unwanted noise.

Audio Technica's first ever ribbon models, the AT4080 (far left) and the AT4081 (left), are both active designs, which means that 48V phantom power is required for operation. Each uses a dual‑ribbon element to give a higher output level, and this element features what Audio Technica call their MicroLinear ribbon imprint technology, which they claim protects the ribbons from lateral flexing and distortion. I assume that this is a means of embossing a pattern onto the ribbon to enhance its rigidity, but no precise details are currently available, other than that the raw material is folded and pressed many times to produce a final thickness of two microns — like the old sword‑making technique for hardening metal. Most of the crucial processes during manufacture, including the imprinting of the ribbon, are done by hand.

The AT4080's documentation describes an acoustic baffle system which, in conjunction with a generously large output transformer, maintains an extended low‑frequency response, while maximising dynamic range and allowing SPLs of up to 150dB to be tolerated. The mesh basket also incorporates an ultra‑fine layer to break up wind blasts, and the ribbon element is supported by a purpose‑designed shockmount to reduce stand‑borne vibrational noise. As with all conventional ribbon mics, the polar pattern of the AT4080 is figure‑of‑eight.

Weighing 474g, this mic looks more like a condenser mic than a ribbon, measuring 177.5mm long by 53.4mm in diameter at the widest point. A conventionally wired, three‑pin XLR carries the balanced output.Our review sample came in a vinyl box with no shockmount, though the documentation says it normally ships with an AT8449/SV shockmount, a microphone dust cover and a protective carrying case. My standard AT shockmount (the one I use with my AT4033) fitted perfectly, and was used for this review.

Typically, ribbon microphones start to roll off the high end at 10kHz or below, but the useful range of this mic is cited as 20Hz to 18kHz — and examination of the response curve shows the response to be fairly flat up to 15kHz, but with a pronounced bass bump. You choose ribbon mics for their sound rather than their accuracy, though, so the paper spec is rather less important than the subjective tonal character. The self‑noise figure of 22dB would be considered a little on the high side for a capacitor microphone, but it's actually pretty impressive for an active ribbon — and rather better than many passive ribbons would manage when teamed with a typical project-studio preamp. An open-circuit sensitivity of –39dB (11.2mV, ref 1V at 1Pa) is specified, and the signal‑to‑noise ratio works out at 72dB (1kHz at 1Pa), with dynamic range of 128dB at 1kHz for maximum SPL.

Although still a side‑address mic, AT's second ribbon model, the AT4081, has more of a stick-mic profile. Again, this is an active mic, and it uses the same MicroLinear ribbon technology and hand assembly techniques as the AT4080, though the slimmer profile precludes the use of such a large transformer. The perforated metal grille allows a good view of the ribbon element, while offering reasonable protection from air blasts. Typical applications are stated as horns, strings, drum overheads, orchestras and guitar cabinets. N50 neodymium magnets are employed to maximise the output from the ribbon motor.

The technical specifications are slightly more 'relaxed' than those of the more costly AT4080, with a useful frequency response of 30Hz to 18kHz (again, rolling off at 15kHz but without the bass bump) and an open-circuit sensitivity of ‑42dB (7.9mV, ref 1V at 1Pa). Again, the maximum SPL is 150dB, but the equivalent input noise is slightly higher, at 25dB SPL, making the dynamic range at maximum SPL 125dB, and the signal‑to‑noise ratio is 69dB (1kHz at 1Pa). Weighing 152g, the mic is 155mm long and 21mm in diameter at its widest point. An AT8471 isolation clamp with thread adaptor, windscreen and protective carrying case are included with the mic. 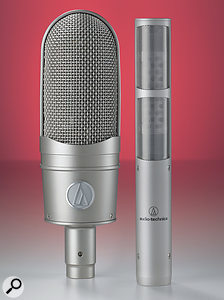 The more costly 4080 performed exactly as I'd hoped a good ribbon mic would, but with the benefit of a little more high‑end extension, handling pretty much everything we threw at it. For comparison, I put up a Coles 4038, which has a particularly warm sound and a very generous low end. Like the Coles, the AT4080 still has the characteristic smoothed‑over high end of a ribbon, so it won't be the best choice in every situation — but it in our tests it delivered silky‑smooth vocals, warm acoustic guitar and a very respectable electric-guitar sound. It also did a great job on hand percussion. There is, of course, still rather less high‑frequency detail than you'd expect from a capacitor mic, but that's one of the main reasons that you'd choose to use a ribbon mic!

Other than the smoother‑than‑life high end, the sound comes over as very natural, with plenty of low‑end depth and mid‑range detail, and because the circuitry is active, the output level is high enough when working with quieter acoustic instruments, without needing a dedicated ribbon‑mic preamp. Overall, I found that the sound was a little less fat and warm than the Coles, but still very musical.

For electric guitar cabs, finding the right mic position is always pretty critical, but I managed to get some great results with the AT4080. Moving onto acoustic guitars, if you want a sound that tends towards the 'zingy', a ribbon mic is probably not the best choice (unless used in conjunction with a capacitor mic), but if you're going for a more natural sound, or recording classical guitar, the AT4080 is certainly worth trying.

By comparison, the AT4081 had a little less low‑end extension, and on our spoken‑word tests it exhibited a mid‑range coloration that made it sound slightly harsh in comparison with the Coles. That said, this same tonality worked in its favour when recording electric guitar, as the note attacks were better defined, and overdrive guitar had more 'rawk' and attitude, but without the top end getting too ragged. Similarly, the attack of hand percussion was emphasised in a useful way, bringing out both the slap and ring of my dharbuka. The AT4081 also worked adequately on acoustic guitar, helping to enhance definition without allowing the top‑end to become rough or scratchy‑sounding. Despite my initial impressions (I found the forward character somewhat surprising), the AT4081 has some very useful characteristics that can help pull sounds out of a mix without adding an abrasive high end.

Both these mics are beautifully engineered, and both have their strengths. The AT4080 comes closest to what I think of as the classic ribbon‑mic sound: there's no obvious coloration, other than the characteristic high‑end smoothness of a typical ribbon model. It has bags of bass extension and a natural, warm quality that allows it to produce good results across a wide range of sound sources — but remember that because figure‑of‑eight mics exhibit a proximity bass‑boost you may need to apply some low‑cut filtering when working close to the source, to achieve the best results.

The AT4081 has a noticeably more coloured sound, and less low‑end extension. That's not necessarily a bad thing, but it does mean it's better at some things and worse at others, and thus less suitable if you're looking for a good all‑rounder. Its main strength is in bringing out the detail in sounds where the upper mid‑range needs a helping hand — just like many condensers, but again with the ribbon's natural ability to put a positive spin on the high‑frequency end of the spectrum.

Both mics deliver adequate output levels, thanks to the active circuitry, and the noise level is acceptably low for most types of studio recording. The other benefit of an active ribbon is that, unlike a passive ribbon mic, you won't risk damaging it by plugging or unplugging it with the phantom power switched on, and the choice of mic preamp becomes less critical. Overall, these two mics make a very welcome addition to the Audio Technica product line, and uphold the company's reputation for engineering quality microphones at a realistic price point.

There are mid‑priced ribbon mics on the market these days, both active and passive, from companies such as MXL, Sontronics, SE Electronics, Shiny Box, Superlux and Golden Age Projects, to name but a few. All exhibit the ribbon's characteristic smooth high end, but there are significant tonal variations between different models, ranging from warm to downright dull. In the same sort of price range as the AT models, you could consider the Blue Woodpecker and SE's forthcoming Voodoo range. The Coles 4038 mentioned in this review is rather more characterful but similarly priced, and the more affordable models by AEA are well worth a look.

These are both very flexible and beautifully built microphones that capture the familiar ribbon‑mic character, but without the usual low signal‑level complications, and they preserve a little more of the high end too. The AT4080 has the most natural ribbon sound overall, but the AT4081 is a great ally when you need to add some upper‑mid attitude.