Big Fish Audio's Pop Rocks! (their exclamation mark, not mine) is the company's latest addition to their massive genre-based construction-kit catalogue. This library follows the format of the Classic Rock title (which I also reviewed recently for SOS), in that it goes for depth rather than breadth, offering a relatively modest number of construction kits (15, in this case), but each absolutely stuffed with loops. As with Classic Rock, this title is supplied in a range of formats for maximum accessibility and also includes a separate folder containing all of the multitrack drum recordings. I do hope this last element is a trend that will continue, because these drum recordings provide excellent additional flexibility when it comes to mixing — and because all the song elements are provided, they're also great as a basis for building brand-new material. 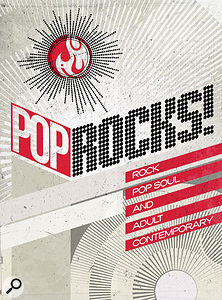 Like band names, I'm sure there are times when deciding on the best title for a sample library can prove quite difficult. Given the nature of the samples, I can understand why BFA went for Pop Rocks (with or without the '!'), because I suspect the more accurate 'Current Chart Material in Pop, Pop Rock, Rock With A Touch Of Soul And AOR' didn't have the marketing or cover-graphics department jumping for joy. However, the musical content should have, as these kits are, almost without exception, of a very high standard. If you're a fan of bands such as Train, The Script, Snow Patrol, The Fray and Coldplay or, taking the same genre back a few years, Feeder and The Stereophonics, you'll be on familiar ground here. There are also a couple of kits with a more humorous, light-hearted, quirky vibe.

The palette of instruments is what you might expect, dominated by drums, bass, guitars, piano and organ, all very well played and recorded, with plenty of character to the sounds. Interestingly, many of the kits also include some nice melodic backing vocals — an excellent addition. Given that all the kits provide multiple song sections of intro, verse, bridge, chorus and outro, and then multiple guitar, piano or organ parts within each section, it really is a case of just needing a lead vocal to construct a complete musical performance. While one or two of the kits made me think 'album track', there are equally a number from which you could construct a track that would not be out of place on prime-time national radio. So if Chris Martin or Kelly Clarkson owes you a favour, Pop Rocks! is a pretty good platform upon which to call it in. Top stuff. John Walden