Eventide are among the last of the big-name hardware manufacturers to offer their wares as native plug-ins. Has it been worth the wait?

Eventide's Omnipressor compressor/limiter and 2016 reverb were innovative pieces of studio hardware on their release, and have since become acknowledged classics. An emulation of the former has been available as a plug-in for many years, but only for Pro Tools TDM systems. Now, however, Eventide have released Omnipressor and 2016 Stereo Room as cross-platform plug-ins in the native AAX, VST and AU formats, authorised using a second-generation iLok dongle.

We took a peek at Omnipressor many years ago in September 2003 (/sos/sep03/articles/clockworks.htm) when it first became available for the TDM format, but it is certainly worth a brief revisit now that all DAW users have access to it. A very unusual design, it can perform compression and expansion simultaneously, enabling it to produce dramatic dynamic effects that most other compressors can't replicate. It is also capable of seriously heavy-handed processing, making it attractive for use in parallel compression scenarios.

A nearly unique attribute of the Omnipressor is its ability to deliver dynamic reversal, where loud sounds are made quieter and quiet sounds louder, to the extent that normal dynamics are turned on their head. If you want that almost reverse cymbal sound heard on early Who records, this is your boy!

Omnipressor can be instantiated as a mono or stereo plug-in, with the option of a side-chain input. Input Cal switches attenuate the level feeding the processing section by 10 or 20 dB: this arrangement mirrors the controls on the original hardware, but I'd have forgiven a departure from authenticity to have had a fully variable control. Input Threshold adjusts the gain crossover point, so that in Compression mode a signal falling below the threshold will have its level increased, while signals exceeding the threshold will be attenuated. A filter in the side-chain allows for an optional bass cut to reduce the effect of low frequencies on the compression process. Attack and Release controls adjust the response time in the usual way, and the meter can be switched to measure input or output level, or gain reduction. 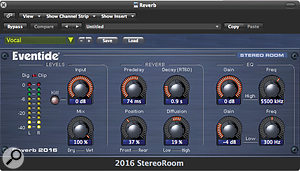 The Function dial both sets the compression or expansion ratio and determines which is performed. The fully anti-clockwise position is close to hard gating, and the dynamic control moves through expansion to compression as the dial is turned clockwise past the midway point. As the control is rotated further clockwise, the dynamics are further reduced, until a point of infinite compression or hard limiting is reached at around three-quarters travel. Turning the control beyond the infinite compression point brings about gain reversal, where sounds that were originally below the threshold become louder than what were originally peaks in the signal. With the control fully clockwise, sounds above the threshold are effectively silenced.

LED indicators show when gain reduction or gain increase is taking place, and a limit can be placed on how much gain increase or reduction is allowed, using the Gain Limit and Atten Limit controls. The compression effects can be wonderfully brutal, but you can also get close to subtle if you're careful, so it can cover a lot of ground. The ability to double as an expander also adds to its usefulness, but for me, the Omnipressor really stands out as a pumping rock compressor or as a parallel compressor, and I like everything about it other than those stepped input and output gain controls. A number of presets are available to give you some idea of how this plug-in can be used, but it really doesn't take long to get the hang of it.

The original Eventide SP2016 reverb has graced countless hit records, and some top studios, such as Ocean Way, apparently still have a hardware SP2016 in daily use. While the SP2016 offered a range of algorithms, the Stereo Room setting proved to be particularly popular, which is why the company have reincarnated that particular algorithm as a plug-in. With just 10 rotary controls and a reverb kill button, the Stereo Room is very easy to set up and use.

There are just four reverb parameters, plus four more knobs to adjust low and high EQ. The crucial controls for pre-delay and decay time sit above knobs dedicated to room Position and Diffusion. Diffusion influences the rate of complexity build-up in the reverb tail and hence the character of the simulated space, while Position modifies the algorithm to emulate a listening position close to the performer, at the back of the room or at any point in between. Complex early reflections deliver a convincing sense of placement within a real space, while the decay tail is surprisingly smooth for an algorithm developed so long ago. The EQ offers simple cut or boost at adjustable high and low shelving frequencies.

Eventide tell us that the algorithm was originally designed to simulate the natural behaviour of a real enclosed space, by combining carefully structured early reflections with a natural increase in reflection density over time, followed by a smooth decay. This would appear to hold out in practice, as even when it's run 100 percent wet, there's still a strong sense of the original sound being present in a real space, and a touch of pre-delay adds a sense of depth. This sense of the original source being present in a real space is a characteristic common to many Lexicon algorithms ,too, and often lets you add more reverb before washing out the sound. The illusion of placement created by moving the Position control from Front to Rear is also pretty convincing, and, if anything, the reverb tail sounds more natural than its vintage Lexicon counterparts — I've always felt the old Lexicons had a 'larger than life' aspect, which can, of course, also be very desirable in pop production.

The Stereo Room plug-in works well on both instruments and vocals. Where some reverbs sound like an added layer of reverb pasted on top of the dry sound, this one integrates in a very natural way. I was particularly impressed by its ease of use, and because of the way the controls are designed, it's almost impossible to get a bad sound out of it — inappropriate sometimes, perhaps, but never actually bad! While modern reverbs benefit from greater realism and a higher reverb density, because of today's much more powerful processors, I often find they're actually too smooth to work well in a pop mix. As a consequence, I'm constantly going back to the plug-in versions of vintage gear such as the early Lexicon hardware, the EMT 240 and the EMT 140 plate to give me the results I need, especially on vocals. The Eventide Stereo Room will make a welcome addition to that arsenal.

The closest old-school reverb to the 2016 Stereo Room is probably the EMT 240 for the UAD platform, but there are several great algorithmic reverbs available at all price points. The Omnipressor doesn't have a direct equivalent that I can think of, although, again, there's no shortage of 'bad boy' assertive compressors, including the Empirical Labs Fatso.

Both these recreations of classic Eventide kit have a very definite character, making them welcome additions to anyone's plug-in library.