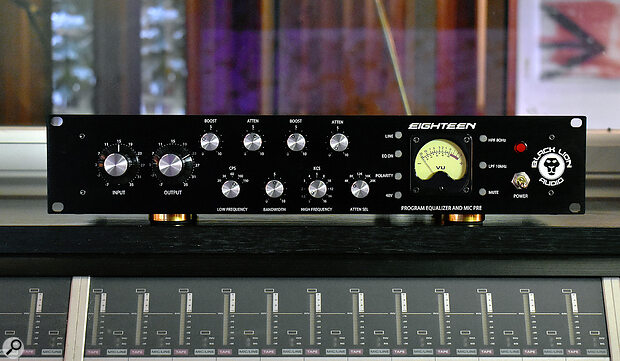 Black Lion's Eighteen is named after the 1831 op‑amp, two of which lie at the heart of this new channel strip. Designed specifically for the Eighteen, this op‑amp is based on the 1960s Melcor 1731 op‑amp. The original designers of the Melcor 1731 ended up working for API during their formative years, and helped pave the way for the famous 2520 op‑amp that's still a cornerstone of API's preamp and console designs.

As you'd expect of Black Lion, though, their version features several tweaks.Each of these new 'vintage' op‑amps can provide up to 35dB of gain, to give a maximum of 70dB, which is more than enough for most applications. Also contributing to the colour of this device are a passive Pultec EQP‑1a-style EQ section, based on a Cinemag inductor, and Cinemag input and output transformers.

The Eighteen includes all the features we now expect to find in a mic preamp, and more. There's switchable 48V phantom power and polarity reverse, of course, as well as an 80Hz high-pass filter. But there's also a 10kHz low-pass filter, and a mute switch which stops the unit passing audio. Another switch sets the unit to accept line-level inputs, so that the Eighteen can be used as a standalone EQ, making it much more versatile.

The large 1176-style input and output controls are stepped in 4dB increments and, as mentioned, provide up to 35dB of gain each. When the passive inductor EQ is engaged, this is placed between these input and output stages, which is very useful. One of the side‑effects of a passive EQ is that you can lose a bit of gain on the way through, and being able to quickly adjust for this is handy when you want to audition what the EQ is doing. It also means that you can experiment with driving the input and output stages differently, for more or less saturation at different points in the chain.

The knobs for the EQ again resemble those of the 1176, but their function and layout will be instantly recognisable to anyone familiar with a Pultec EQP‑1A-style EQ. Three knobs give you boost and attenuation at the same, selectable (20, 30, 60, 100 and 150 Hz) low frequency. Three more give you the option of cutting or boosting high frequencies (1, 1.5, 2, 3, 4, 5, 8, 10, 12, 14 and 16 kHz), with adjustable bandwidth. The unit is nicely laid out generally, and it's really quick to get up and running. I liked that the gain controls are bigger than the EQ ones, and the large VU meter is a welcome addition: it's a responsive and helpful visual indication of how hard you're driving the unit.

The first thing I deployed the Eighteen on in my studio was a DI'd bass guitar, from which we were trying to sculpt a dry, Motown-style sound. After sticking the obligatory piece of foam behind the bridge pickup, the first thing I reached for was the classic low-frequency 'cut and boost' technique that is one of the reasons people love this style of EQ. Eyebrows were raised (in a good way!) and heads started to nod as I cranked upwards of 7dB at 100Hz combined with a cut of around 5dB at the same frequency. Smooth, full low-end was the result and, combined with a little boost at around 1.5kHz to bring out some articulation, we had just the sound we wanted. The same technique worked brilliantly on a thin-sounding kick-drum recording in a mix I was working on.

It wasn't just the low end that was impressive with this EQ, though. Broad boosts at 10-12 kHz opened up the top end of a female vocal in a very natural-sounding way. I also liked going narrower with the bandwidth control when recording acoustic guitars, with boosts in the 1.5-4 kHz area always seeming to help a guitar sit in a track that bit better. In fact, the EQ side of the Eighteen was always impressive, but it's not just about the Pultec-style curves. This EQ sounds better than several other recreations I've tried, and I suspect the way it interacts with those gain stages contributes to that.

It's not just about the Pultec-style curves. This EQ sounds better than several other recreations I've tried.

It's obvious that Black Lion didn't set out to build a clean, transparent-sounding device, but it's not what I'd call 'overly coloured' either. I always cringe a little when trying to put into words how I think a preamp sounds, but to give you an idea, it seemed a little softer sounding than my APIs, yet also brighter than my Neve 1073. Somewhere between these two classic designs is no bad place to be, and having the input and output controls to play with means it's also easy to shape the sound due to how hard you're hitting both the transformers and each op‑amp stage. I found it very easy to dial in a sound and commit to it when tracking, coax a little pleasing thickness from a source, or blur the edges slightly with some transformer saturation.

The Eighteen did not lay idle while in my studio, as some review gear can, as I found it to be an excellent tool for both recording and mixing. The preamp is very versatile indeed. The high- and low-pass filter options, and that lovely Pultec-style EQ, build on it to create a truly impressive-sounding channel strip. In terms of price, the Eighteen is a small jump up from Black Lion's previous releases, but it's fair: it reflects the quality of the components packed into the unit, and it's still great value compared with similar-sounding, similar-quality products from some of the industry's heavy-hitter brands. The Eighteen is easily my favourite Black Lion release to date and it can hold its head high in such company.

The Eighteen is a very nicely judged channel strip with a characterful, Melcor-inspired preamp and an excellent-sounding Pultec-style EQ. It won't spend much time sitting idle in your studio!