The five-octave Nord Wave 2 is a Jack of all trades and master of, well, really quite a lot!

Nord's new Wave 2 is a successor to the original Wave, the virtual analogue synth with sample-replay oscillators that was produced from 2007-2013. In many ways the Wave 2 is also a natural development of Clavia's Lead family of synths, and has knocked the Lead 4 out of the Swedish manufacturer's product line-up. It's a virtual analogue instrument still, and as is often the case, any lack of purist analogue authenticity is mitigated by significantly increased polyphony (48 voices) and flexibility in the synth architecture. That includes sophisticated oscillators with virtual analogue, wavetable, FM and sample replay modes, multimode filters, and a four-part/layer sound structure that can be employed flexibly for different tasks.

Can virtual still mean virtuous in 2020? With the new Nord inserted in my own increasingly retro, voltage-controlled studio I was very keen to find out.

The Wave 2 is a neat and purposeful thing, metal-bodied with grey ends, and bristling with positive-action knobs and buttons familiar from other Nord models. The 'signature' wooden pitch stick and thin mod wheel are there too, amongst a small group of additional performance controls. The two clear white-on-dark OLED screens are good to see, and are a big step up from the often cryptic two-digit LEDs employed for the same purposes in the previous generation of Lead synths.

On the rear panel there's an IEC power inlet (full marks, Nord), a single stereo pair of output sockets next to a headphone out, an 3.5mm audio input, sustain and expression pedal inputs, DIN MIDI In and Out, and a USB Type B port.

The keyboard is notable for a few reasons. First, it's five octaves long, which is going to be massively preferable for many players to the four of all preceding Nord synths. Second, it adds aftertouch sensitivity, which was such an unfortunate omission on the Lead 4 and A1. Third, it's pretty much a 'waterfall' design with a solid/rounded front and side profile, and has a smooth, shiny finish. White key length is a relatively compact 132mm, the mechanism is semi-weighted and firmly sprung, and the aftertouch response is first-class. It's a huge improvement over the fast but flimsy-feeling Fatar TP/7 used in the Lead A1, and though not as silky as a TP/9 (used by Sequential amongst others) it's as good, in a different way. 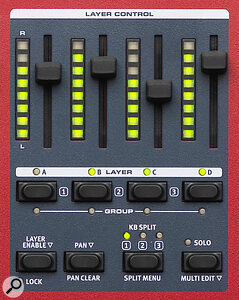 The Layer Control section.Where the original Wave was bitimbral, the Wave 2 goes quad. The four layers can underpin complex multi-layer sounds, keyboard splits (with up to three split points and four resulting keyboard 'zones'), or indeed sequencing with one layer per MIDI channel and optional live-played layers on top. It really is like having four separate synths in parallel, with their own completely separate effects sections, combining only to share the single stereo line output.

The front-panel Layer Control section is where it all happens, with dedicated buttons enabling, accessing and soloing layers, and faders controlling volume and pan. There are some nifty options too, like split-point crossfades that can dovetail sound transitions across six or 12 semitones. Keyboard Split points can only lie between E/F or B/C pairs across the bottom four octaves of the keyboard, but on the plus side, are indicated by panel LEDs. Helpfully, layers can also transmit on their own MIDI channels, which makes the Wave 2 into an unexpectedly effective master keyboard, capable of controlling external MIDI modules from a couple of zones, and its own sounds from one more (say). The implementation is rudimentary and lacks dedicated controller niceties, but it's a welcome addition all the same.

The basic unit of patch memory is the Program, and there are 400 slots on board (accessed in 16 banks of 25, all user-writeable). Each contains all the settings for an entire Wave 2 patch: the whole four layers' worth, even if fewer are actually used, which completely does away with distracting distinctions between single-layer and 'multi' memories. 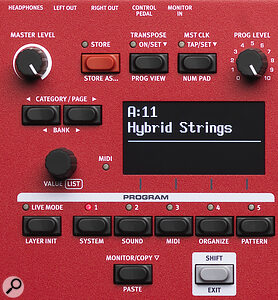 Nord Wave 2's Program controls.Management by name and category in those nice bright OLEDs is a colossal improvement over recent Nord synths, and there are good options for viewing Programs in list form, in filtered subsets, alphabetically, and with a summary of the contents of their four layers. Nothing is offered in the way of 'seamless transitions', by the way, so calling up a new Program always silences anything that was previously sounding. However, within a Program, layers can be enabled and disabled glitch-free, with robust avoidance of hanging notes and so on, so it's possible to line up four single-part sounds and move between them at will.

To get to the nub of what the Wave 2 is capable of, and how the thing actually sounds, is not a trivial or quick affair. It's something of a chameleon: each layer can use either a virtual analogue, wavetable, 4-operator FM or sample playback sound engine. All are worthy of quite a bit of comment.

Actually, beyond those basic engine choices the design is perfectly conventional. The synth engines output into a six mode filter with its own ADSR envelope, there's a dedicated Amp ADSR, an auxiliary 'Osc Mod' AD/AR envelope, a single global (ie. not per-voice) LFO, and a dedicated vibrato LFO.

We've got to start somewhere, so it might as well be the Analog oscillator mode, which, in many ways, feels fundamental to the whole synth.

How many oscillators does the Wave 2 have per voice? That's a pertinent question for any new user of this synth, because unlike pretty much any integrated synth since the Minimoog, there's just a single Oscillators section that gives no hint of what lies within.

The simple answer is in fact 'up to three' but the fuller explanation is that this is a 'multimode' oscillator section. Four of the seven Categories (Nord's terminology) give you a single oscillator per voice, while the remainder mimic the sound of multiple oscillators through a sort of macro control scheme. 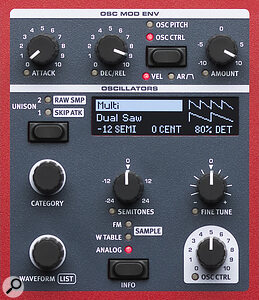 Clavia Nord Wave 2 Oscillator section.Starting simple, the Basic category gives you a single-oscillator Sine, Triangle, Saw, Square or Pulse (in 33 percent or 10 percent widths). Shape does pulse-width and/or shape variations of many of the same, along with interesting Half-Sine and Parabolic waves. Shape Sine morphs a sawtooth, square, pulse and several other harmonically interesting starting points back and forth from a sine, which is more aurally interesting than it might at first sound. And the last single-oscillator offering is Misc, gathering together White, Pink and Red noise with a Bell that has a sine fundamental alongside a stretchable inharmonic overtone series. At all times the OLED display in the Oscillator section gives a graphical indication of waveshape, updating in real time when changes happen. And this proves just as helpful for the multi-oscillator categories as it does for the singles.

In Sync the Osc Ctrl knob dials in a characteristic hard sync sound which in a conventional design, of course, would require two oscillators correctly configured in a leader/follower relationship. Notable waveforms here are two 'Chop' Saws and a Chop Square that generate buzzy talkbox and formant-like resonances.

Viewed as a whole, this is a seriously potent collection of analogue-style starting points, and the three-encoder interface for exploring them is genuinely easy and quick to use.

If you're thinking that a swathe of simple but useful two-oscillator combos are not available, though — slightly detuned unisons, for instance, or a square with a sine sub-bass maybe — you'd be right. They're achievable in other ways: for doubling and thickening you could use the good three-way unison effect (which doesn't steal polyphony), or utilise the multi-layer architecture to run detuned or transposed single-oscillator sounds on two layers. That could sound like a faff but it turns out it doesn't have to be: one layer can be quickly copied to others, and any number of layers grouped so that parameter tweaks made on one apply instantly to others. Still, it will require a small but significant shift of mindset until you're used to the concept.

It's also interesting to reflect that the two fruitful dual-oscillator combinations I mentioned are available on the Lead A1 within a single layer. It would be nice to see Nord reinstating these additional combo categories in a future Wave 2 update, especially for users trying to squeeze the very most out of their layers.

Equally as accessible as the virtual analogue waveforms, in the Oscillators section, is a sample playback mode.

The Wave 2 is not by itself a sampler — it doesn't have a suitable audio input, nor any on-board editing facilities — but the 1GB sample memory is user-configurable using a Windows/Mac OS Nord Sample Editor application: find out more about it in the 'Apps' box.

The headline features of sample playback are these: samples load instantaneously, they can be in mono or stereo, and there's support for simple looping (for sustain purposes) and key-group multisampling, but not velocity switching or round-robin alternation. Also there are no facilities for exploring loop lengths on the fly from the front panel, granular-style, or indeed reversing them, like on the Prophet X. In short, sample playback is effective but relatively simplistic, more akin to a ROMpler than a true sampler.

Quite a bit of the sample content in the factory set utilises a hidden filter and envelope structure, more than anything to make it sound right on recent Nord Electros and Pianos, which don't expose any synthesis parameters. These baked-in settings can be overridden on the Wave 2, though, and prominent attack phases similarly skipped to get to the raw, sustaining harmonic content.

A sample oscillator can be subject to the same range of coarse and fine tuning (±24 semitones and ±50 cents) as its Analog counterpart, and I was pleased to see that when you dial in a -1 octave playback pitch for the oscillator but apply a +1 octave shift for the entire layer (using buttons near the pitch stick and mod wheel) the audible result is at the original pitch but spectrally skewed. That opens up useful creative possibilities.

It's fundamentally well-rounded and unpretentious, but is capable of turning out a constant stream of classy and very usable sounds with astonishing ease.

The FM implementation offers 10 algorithms using 2, 3 or 4 operators. It's simpler than a typical Yamaha implementation: technically speaking, there's only ever one modulator with variable pitch/ratio. But that makes it miles easier to use, with the three-knob oscillator section combo generating a broad range of harmonic, distorted and experimental inharmonic spectra.

DX-oriented electric pianos (et al) in the factory Programs recall the sound of Yamaha's simpler 4-operator engine of yore, but there's also scope for creating novel tones, more towards Elektron Digitone territory. And of course the FM oscillator (like all other types) outputs into the filter and effects, so it's trivially easy to sculpt things further down the line.

As for the wavetable mode, that encompasses 46 discrete waveforms in various groups, some naturalistic, others synthetic. No interpolation between waves is available, so think of these as a bank of static digital waves in the manner of a late '80s Korg DW rather than a Waldorf Quantum, say. Any nuancing will need to come from the filter, but they're still a useful addition to the Wave 2 armoury.