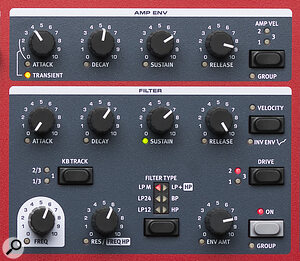 Clavia Nord Wave 2's Filter and Amp Env section.With the oscillators finally behind us, let's turn to the Wave 2 filter. This offers three low-pass types: a lively and open 12dB/octave, a generic 24dB type and a Moog ladder emulation. Then there's a non-resonant LP+HP dual 12dB filter which can rather magically recall the sleek, sizzly nature of an Oberheim SEM or other continuously variable filter. Finally there's both a normal band-pass and a high-pass.

Other features are simple but effective, like keyboard tracking and drive with three preset levels, and an invertible ADSR that's optionally velocity responsive.

The dedicated amp ADSR has an interesting Transient option, to add a driven thump/spike to the first few milliseconds of the attack phase. Meanwhile the Osc Mod envelope is a switchable AD or A[S]R design that's routable to oscillator pitch or Osc Ctrl only, with positive or negative polarity. An obvious role for it is to modulate one of the Sync waveforms, to generate a falling sync 'howl' on every key press.

The Wave 2 has fewer LFOs than many other synths. At first glance there seems to be just one, with multiple waveforms (including sample & hold), sync'able to the on-board clock or incoming MIDI clock, but no delayed onset options, and routing only to Osc Ctrl (for PWM and the like), Osc Pitch or Filter cutoff. It's monophonic, working on all voices in a layer at once, rather than individually.

There is another LFO, though, in the form of the one-button Vibrato section: it's polyphonic this time, with a fixed sine wave, and affecting oscillator pitch only. Three delay options (of 0.25, 1 and 1.5 seconds) are available, or it can be brought on by the mod wheel or aftertouch. Vibrato rate and amount are about the only sound-affecting parameters on the whole synth that do not have dedicated controls, but can be varied (within modest limits, it must be said) from the nearby OLED.

Conspicuous by its absence on the Wave 2 is any kind of modulation matrix. Taking its place (alongside the hardwired modulation destination options in the Osc Mod envelope, main LFO, and for the modulation wheel) is a Morph system that'll be familiar to users of some other Nords but potentially unfamiliar to everyone else. 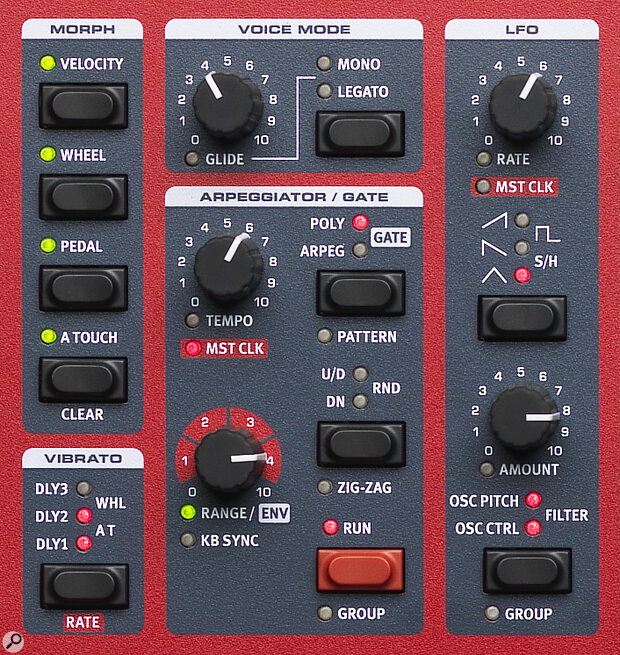 The concept is simple. Key velocity, aftertouch, mod wheel and an expression pedal are seen as potential control/modulation sources. By holding one of the dedicated Morph buttons for each, and moving front-panel knobs or faders, the source is tied to parameter values across any desired range, and in either polarity. You might for example have aftertouch simultaneously raising filter cutoff and increasing LFO rate, reducing resonance and filter drive, and making the reverb wetter. And it can do that while an expression pedal fades out one layer and brings in three more, for example. Most continuous parameters on the front panel are fair game, and when they're involved in a morph, a little LED indicator next to them lights up.

There's also Impulse Morph, a feature carried over from the Lead 4 that delivers momentary, instantaneous parameter value changes when its button (in the cluster of performance controls) is pressed. Even more parameters are available to this, as it can enable or disable entire sections (like filter, arpeggiator, effects) or toggle modes (octave shift, arpeggiator direction, delay/reverb type, and so on).

The Morph system has an impressive ability to allow a lot of expressive real-time control to be set up in seconds, in a tactile and intuitive manner. Elaborate and more extreme use can make for some jaw-droppingly potent and dynamic effects. But it is primarily a performance-based feature, and for synthesists with really specific programming requirements, like exploring recursive modulation or modulator-on-modulator action, it may not go far enough. The one modulation aspect I really missed was any kind of keyboard scaling so that I could, for example, have envelope time vary with pitch. Still, Morphs are a friendly and fruitful feature that kept me happy for hours, and always seem to have something more to offer.

Arpeggiators are always fun, and this one adds a couple of extra twists. Expected options (see photo, above) are all there: up, down, up/down and random directions, over one to four octaves, plus a zig-zag alternative that leapfrogs steps. However, Poly makes all the same shapes but plays the full held chord (and inversions of it) rather than individual component notes. Gate effectively turns the arp into a slicer: an audio effect that rhythmically silences held notes without retriggering their envelopes, and with variable slice 'hardness'. Then, available to all three modes is a further Pattern option, which can impose a sequence of varying note length, rests, and left/centre/right pan per step. This adds hugely to the flexibility, and because the four arpeggiators (one on each layer) can sync to the on-board clock or incoming MIDI clock, elaborate interplays can be set up: even simple forms of drum programming are possible.

Clock, incidentally, distributes to the LFO, multi-effects section and the delay, so sync opportunities are abundant.

Effects processing is an undoubted highlight of the Wave 2. Each layer has a multi-effect switchable between Tremolo, Autopan, Ring Mod, Phaser, Chorus, Ensemble and Vibe (a chorus/vibrato combo) feeding an EQ that's switchable between two-band Bass/Treble and a single sweepable mid, alongside a Drive/distortion. Then it's on to a Delay with switchable digital/analogue character and ping-pong, and the possibility to insert both a chorus, vibe or ensemble effect and LP/BP/HP filters into the feedback path. Finally, there's a Reverb, with five algorithms ranging from Booth to Cathedral, with optional Bright/Dark EQ/damping and 'chorale' modulation. 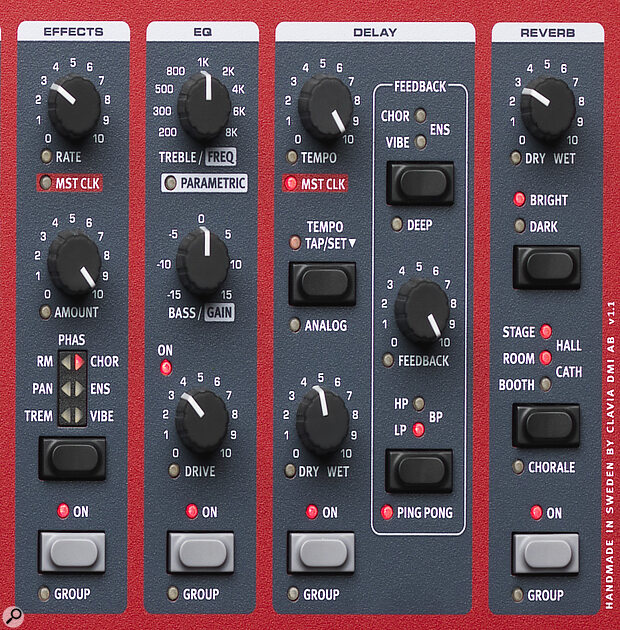 The fact that layer effects are truly independent — so that's 16 simultaneously active effects potentially — feels lavish and liberating. There are no irksome limitations with shared top-level send/return relationships, or arbitrary CPU limits, and the quality across the board is very high. Sections turn on and off glitch-free too: you can 'play' them manually or via an Impulse Morph. The Chorus isn't the lushest I've ever heard, but it's far from the worst. Reverbs range from naturalistic to pleasantly processed and the simple EQ can work wonders adding a final bolster to a bass or rolling off a buzzy pad.

At this point I could spend a paragraph or two pontificating, but instead I'll cast cool professionalism aside and blurt that I absolutely love the Wave 2: its sound, just as much as its immediacy and versatility.

The analogue side of things can be liquid and lush or downright dirty and potent. Apart from that one hint in the filter section — the 'M' in the Moog-style filter — it's clearly not trying to sound like others synths from history. But I was amazed by the extent to which it could. One of my first programming explorations ended up deep in '70s Jarre territory: I stayed there for hours, happily reliving my (all too rapidly receding) childhood. Another conjured up (courtesy of the apparently innocuous but positively glowing 33 percent pulse wave) totally convincing CS80 sounds that few other synths I've used have got close to. Then there's that LP+HP filter, that might make OB‑6 owners think long and hard: it did me. Multi and Super waves scream Moog and '90s Roland (sometimes literally) and the BP filter mode plus phaser/ensemble effect can conjure up a string machine timbre out of even unpromising starting points. During the test period the Wave 2 was parked alongside Sequential's superb new Pro 3, and whilst I could, if I set out to do it, discern a difference in some aspects of filter sweetness and sheer oscillator clout, the outcome was rarely clear cut, and often a case of 'different' rather than better or worse.

The FM and Wavetable modes are valuable, but the other real star of the show is sample playback. To have instant access to naturalistic strings, analogue Solinas and Eminents, a huge Mellotron and Chamberlin sound set, choirs, guitars, percussion and everything else in the free-to-download Nord Sample Library extends the range of the Wave 2 hugely. Limitlessly of course, since you can sample and load in synths and other instruments you want to have on hand. The lack of velocity switching and round-robins does limit the scope, certainly, but not by as much as you might think: Nord Sample Library sounds are frequently entirely plausible and playable, and extract maximum musicality from surprisingly small sample sizes. The crucial aspect always is that samples exist within an identical synth and effects architecture to analogue waves, part of the overall four-layer design, and therefore apt to be creatively deployed and combined.

Any major downsides? There's the single mono LFO (not anyone's first choice for the lushest PWM pads), the rather conventional and limited vibrato LFO, and limited modulation destinations generally, which the Morph system helps make up for but doesn't directly replace. I sometimes wished for variable envelope slopes (as offered by the ASM Hydrasynth for example), and would also take Sequential-inspired stereo voice spread and analogue slop parameters to loosen things up on occasion. Experimentalists should note there's no support for alternative tunings, and all you bass addicts, be aware that Wave 2 oscillators appear to randomise their onset phase each time a voice is triggered, so you'll get an unpredictable series of phase cancellations when playing repeated notes with a pair of similar-sounding unison or close-tuned oscillators. It's not necessarily a bad thing, but the addition of a 'keyboard reset' option would add a valuable additional flavour.

In the final reckoning, though, there's so much to commend this new Nord. It strikes a brilliant balance between simplicity and capability. It's fundamentally well-rounded and unpretentious, but is capable of turning out a constant stream of classy and very usable sounds with astonishing ease. The multi-layer design is a big part of its strength; so will be the delightfully unhampered effects implementation for all those users (like me) who regard effects as integral to sound design. You might still want a modular system or a matrix-equipped monster to support more out-there sound design voyages, but for everything else, the Wave 2 is a go-to, do-anything synth like few others.

Two other synths, the Sequential Prophet X and the Waldorf Quantum, offer knobby subtractive synthesis alongside sample replay. Both can mangle samples to a far greater degree, but are more expensive and offer nothing close to the Wave 2's polyphony. If you can live without samples, then the 16-voice, two-part Novation Summit has much to commend it. 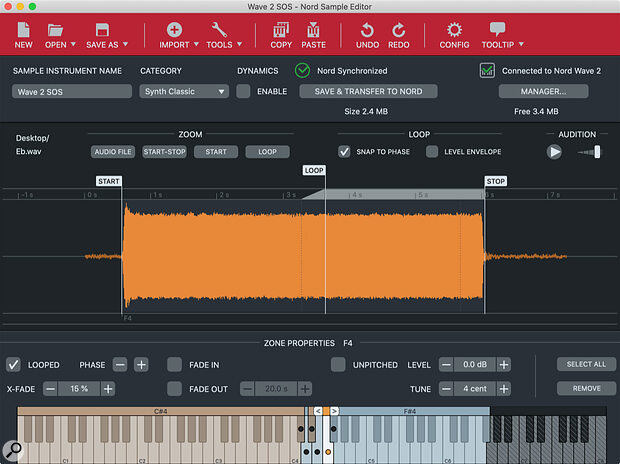 Two Windows/macOS utilities are available to download and use with the Wave 2 for free. Nord Sample Editor lets you put together your own sample sets in drag-and-drop fashion from WAVs and AIFFs. Nord Sound Manager is a librarian, which organises, reorders and renames Programs and linked samples, and can backup or restore entire banks or indeed dumps of the whole instrument. Both are reliable and easy to use, and put many other manufacturers' efforts (or indeed non-efforts) to shame.

A friendly, fast, and super-versatile polysynth, with sample replay abilities embedded in an effective synthesis architecture, and impressive multitimbral chops.