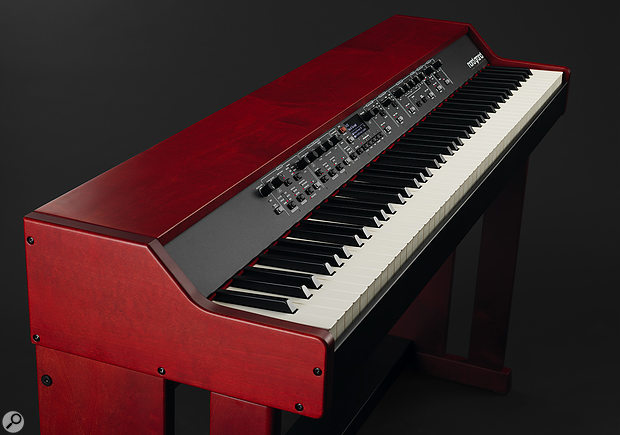 Clavia know a thing or two about stage pianos, and this might be the best one yet.

The Nord Grand is the fifth incarnation of Clavia's piano-oriented keyboards and its abilities echo those of the Nord Piano 3 that I reviewed in Sound On Sound in May 2017 as well as the Nord Piano 4 that succeeded it [see 'Evolution Of The Nord Piano' box later on]. Like its predecessors, it comprises two sample-playback engines: one (the Piano) devoted to keyboard samples, and the other (the Sample Synth) capable of producing a much wider range of sounds thanks to its ability to draw upon the Nord Sample Library. The outputs from the two engines can be played individually, layered or split (with a horizontal crossfade of up to two octaves if desired), and they pass through a signal path comprising six effects sections, five of which can be applied to either signal, both signals, or neither, and the sixth of which is a global reverb.

Despite these similarities, the Grand is the first Nord Piano to adopt a different look and feel from those that came before it. Instead of the flat panel that seems to have existed since the first Nord keyboard crawled out of the ocean, spent a brief time in the trees and then dropped to the ground in order to perform Rachmaninoff's second wotsit, the controls of the Grand are mounted on a sloping panel. In a strange way, this makes the Grand feel more piano-y; it's reassuring to feel something substantial immediately behind the keys. The panel has also adopted a smart new black and white look that marks a significant change from the traditional grey, white and red of previous Nords but, other than that, visible differences are few and far between. For example, there's now a dedicated category selector in the Piano section that makes it easier to select the underlying instrument that you want to use as the basis of a given Program, and the Piano's equaliser is now called Timbre, but that seems to be all that's changed here. Similarly, the Sample Synth now has a pair of dedicated category up/down buttons that also provide quick access to the instrument list, but otherwise its functions are the same. Elsewhere, the Equaliser and Delay sections have swapped positions, but I doubt that anything has changed in the code. Even if it has, the result would be much the same unlike, say, switching the order of a chorus and a delay. Finally, while the Program panel has been split into three separate sections, there's only one change in the control set — the Grand now has a Panel Lock button that stops you from tweaking anything accidentally (although you can still select new sounds in this...