This Nano counterpart to the original Operation Overlord pedal offers the same overdrive and distortion as its larger brethren (reviewed in SOS September 2017) but drops the stereo ins and outs (which were included primarily for the benefit of keyboard players) in order to achieve a smaller footprint. As with the original, this pedal is switchable between Normal and Boost modes. Normal delivers low- to medium-gain sounds, created using three cascaded JFET stages. Bringing in Boost mode effectively adds additional overdrive before the JFET stages, for a more rocky distortion. A Dry control allows a little dry sound to be blended back in, to help preserve note definition. For those using active instruments or keyboards, there's a three-position mini toggle switch to select the appropriate level. An active three-band EQ completes the picture. 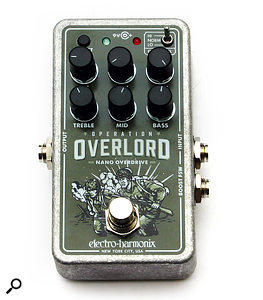 Electro-Harmonix Nano Operation Overlord.A suitable EHX-branded power supply comes with this pedal and, as you'd expect with a modern pedal, the footswitch brings the desired effect in and out without clicks, via buffered bypass circuitry. Red and blue LEDs show when the pedal is active and whether or not Boost is selected, respectively. If you need to bring in Boost during performance without bending down, you can use the jack socket that allows a third-party momentary action foot switch.

The top row of controls are Volume, Dry and Gain, with Bass, Middle and Treble arranged immediately beneath them. A button in the top right–hand corner switches in the Boost circuit (a second footswitch handles this on the full-size Operation Overlord pedal). In Normal mode, there's a bit of bluesy drive on tap, with a nicely transparent sound that cleans up well when you back off the guitar volume control. Unless you have gutsy humbuckers, this won't quite get you into rock territory, but it does take away the sterility from a clean sound and works well for blues or power-chord work. That said, if your amp is already on the edge of break-up and you turn up the pedal's output volume to push it harder, you might get closer to a rock sound without having to kick in the boost. If you have weak pickups, you can also select the more sensitive input switch position instead of Normal to add a bit more gain.

A Dry control allows a little dry sound to be blended back in, to help preserve note definition.

Switch in the Boost and the sound changes up a gear, taking on more of a Tube Screamer-style, mid-heavy character, with bags of dirt on tap. (The amount of dirt from the combined stages still depends on the Gain setting, of course.) You can still clean up the sound to a useful extent by backing off your guitar volume, but the difference between the tonality with Boost on and off had me thinking that the controls might perhaps have been more usefully deployed as two bands of general EQ, rather than three with the third knob dedicated to adjusting the tone of the Boost circuit. Nevertheless, there are lots of good sounds to be had here, and having on-board EQ makes it a lot easier to nail the sound you're after. The EHX Nano Operation Overlord Allied Overdrive, then, is nothing if not versatile and it does what it sets out to do: it takes up less pedalboard space than its full-size counterpart without sacrificing the core tone. In fact, if you don't need stereo operation, I reckon this is probably the one to go for.