Electro-Harmonix’s Operation Overlord Allied Overdrive is a slightly unusual overdrive pedal, in that it has full stereo capability. The dual inputs and outputs are on the sides of the case, and the left channel can be used on its own for mono operation. The input sensitivity can be switched between High, Normal or Low, which means that it can accommodate a range of guitar and instrument-level signals, including keyboards. The pedal also features a configurable boost function, and an EQ, but while the seven knobs and two footswitches inevitably take up space, EHX have managed to keep the pedal footprint down to 70mm wide without the controls feeling cramped. 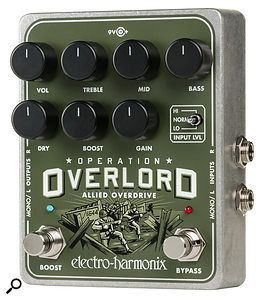 At its heart lies a dual-channel, JFET-based overdrive circuit. This three-stage JFET circuit aims to produce an amp-like distortion, and the character is thus a little different from the diode-clipping circuits used in many other pedals. The gain range runs from mildly dirty to pretty filthy. A further useful feature is a Boost switch, accompanied by a rotary Boost amount control. These are obviously useful for kicking things up a notch for solos, but rather than simply add yet more gain, the default Boost mode puts a more traditional and, tonally, fairly neutral overdrive circuit before the JFET stages.

An internal switch allows the Boost to be used independently of the main JFET overdrive if you prefer — in independent mode, the rotary Boost control has no effect but the EQ controls remain in circuit. When both sections are active, the Boost control works as normal, so the boost stage appears to have been designed to produce a fixed amount of drive, while the Boost rotary control determines how much is fed into the JFET stages.

In addition to the expected Gain and Volume controls, there’s a three-band EQ section with Bass, Mid, and Treble controls, and there’s also a control for mixing in some of the dry signal with the overdriven one. Both the overall Bypass and Boost footswitches, which are quiet in operation, have status LEDs. As with most EHX pedals, the Operation Overlord comes boxed with an EHX 9.6V DC 200mA power supply.

Using the normal setting and with my amp set to clean, the JFET overdrive produced a slight background hiss — but it was nothing that would be a problem in live performance, and probably less than you’d get from dialling in equivalent gain on a valve amplifier. The tonality leans towards classic rock, retaining good note definition and cleaning up appropriately as you back off the guitar volume; the best results were obtained by setting the amp to a point just before it started to overdrive, then using the pedal to push it. With the EQ set mid-way, the tonality takes on a nice Voxy jangle, with the degree of drive ranging from barely breaking up to heavy rock. Pulling back the mid EQ leans things more towards a Brit Rock sound.

Switching in the drive adds weight and thickness as well as a more dense overdrive, but it doesn’t seem to add to the background noise, even when a fair bit of boost is added. Again, the sound is pretty much what you’d expect from a good overdrive, and it’s just what you need for loud solos!

The Dry mix control is very useful, as it enables you to keep the note attacks a bit cleaner while adding sustain; as long as you don’t turn the dry level beyond the mid-way position it all sounds pretty natural. That last comment relates to guitar, but I think the Dry mix control is really useful when treating keyboards — it makes it really easy to keep the essential sound intact, while just adding a little ‘hair’ underneath. It’s a great way to add weight to organ sounds but it can also do wonders for synth-bass and pad sounds. All in all, then, the Operation Overlord is a neat twist on the usual overdrive formula and, other than for the slight background hiss I discussed above, it delivers in all areas at a distinctly non-boutique price.