Can a 1W tube amp really deliver a recordable tone? Blackstar think it can... 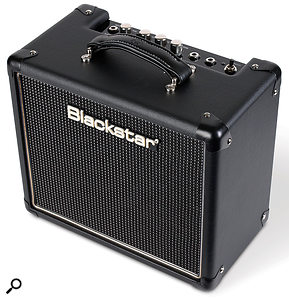 Designed and built in the UK, Blackstar's HT1 combos take the concept of their popular HT5 valve amp and shoehorn it into a compact, 1W format. Two versions are available, one with reverb (the HT1R reviewed here) and one without, and both use Blackstar's ISF (Infinite Shape Feature) EQ circuit to provide a surprisingly wide range of useful tones from just a single control. Separate amp head versions are also available.

While a 1W amplifier might seem a touch under-powered, the HT1 can play loud enough to make you want to turn it down. More importantly, it can still sound sweet at lower levels, which makes it well‑suited to home recording. While most small amps have a class‑A output, the HT1 power amplifier is based around a low‑powered 'push‑pull' stage, using a single ECC82 (12AU7) dual triode. This helps its tonality to mirror what you might expect from a powerful stage amp, but at a much lower level. A solid-state driver stage before the power amp provides the necessary phase-inverter function. An ECC83 (12AX7) dual triode fills the role of preamp, in conjunction with another solid-state gain and clipping stage, as used in the popular Blackstar valve-based pedals. The reverb, on the models that feature it, is a very capable electronic emulation of a spring.

The closed‑back HT1 cabinet is built along the lines of a 'grown up' amp, complete with chunky strap handle. The eight‑inch speaker delivers a well‑balanced sound that, while lacking any really deep lows, largely avoids the boxy, nasal sound that betrays so many smaller combos, but you can also add an 8Ω extension speaker, which mutes the internal speaker when connected. There's a speaker-emulated output jack for direct recording, and this also mutes the internal speaker. An additional MP3/line input allows outside sources to be played through the amp, and while the speaker is hardly hi‑fi (guitar speakers are deliberately not so, of course), it's useful for jamming along to pre‑recorded material or for practising. There's no level control on this input, though, so the level must be adjusted at source.

The front panel is fairly straightforward, with a gain control adjusting the amount of overdrive and a volume control setting the overall loudness. A 'select' button flips between clean and overdrive modes, so can be thought of as a basic version of channel switching, though the level change when you bring in the overdrive can be significant. The result is that the gain control can take you from a nice jangly clean to a classic rock overdrive.

My first impression of the ISF (Infinite Shape Feature) EQ control is that it sounds bright when turned anti-clockwise and warmer when fully clockwise, but there's a lot more too it than that. Anti‑clockwise suggests an 'American' tonality, whereas moving it slightly clockwise hints at a Vox‑like vibe. As you move further clockwise, a more recognisable Brit‑rock tone emerges, with a far fuller‑sounding low end and less abrasive edge, though perhaps not quite as scooped as some people prefer.

The Reverb knob sets the overall level of the reverb effect, which is otherwise preset. This emulates a spring reverb pretty accurately, and the fixed decay time is set to suit most genres. When using the speaker-emulated headphone output, which can also be used for recording, the reverb is in stereo if a 'stereo to dual mono' Y-lead is used to connect to the recording system. With a mono lead connected to the output, it works quite happily, although of course you'll lose the stereo reverb effect.

Despite its simple controls, this is a surprisingly flexible amplifier, and only its lack of deep lows gives away the fact that it isn't a much larger beast. So many compact combos sound boxy but this doesn't. It records well, and is capable of producing a fairly wide range of tones, courtesy of that ingenious ISF EQ knob. Importantly, it has the feel of a valve amp when you play. The eight‑inch speaker can sound a hint gritty at some settings, but careful mic positioning or post‑recording low‑pass EQ helps avoid this. While the speaker-emulated output is perfectly usable, it doesn't really match what you get from miking the amp, and as this amp sounds so plausible at such low volumes, there's really no reason not to mic it. Similarly, although the reverb sounds pretty convincing, making it perfect for practice, most of us have plug‑ins that will do a better job, or produce a more appropriate reverb for the song, so that would be a better option when recording.

Ultimately, a tiny combo amp like this will never sound quite the same as stage amp that's allowed to run wild, partly because the smaller speaker tends to enhance certain aspects of the highs while suppressing the punchy lows. A larger extension speaker will get around this limitation, but Blackstar have to be commended for getting this diminutive amp to sound as big as it does. If you need a small amp for recording or practice, the HT1 ticks all the boxes, and it ticks them with style.

There are several low-powered valve amps available from the likes of Bugera, Laney, Fender and Epiphone, but each sounds different from the others!

Because the ideal electric-guitar sound varies from uses to user, there is no best or worst, just something you like or you don't. The HT1R seems happiest when recreating classic rock and pop sounds and records as well as many larger amplifiers, yet costs little more than a decent overdrive pedal.