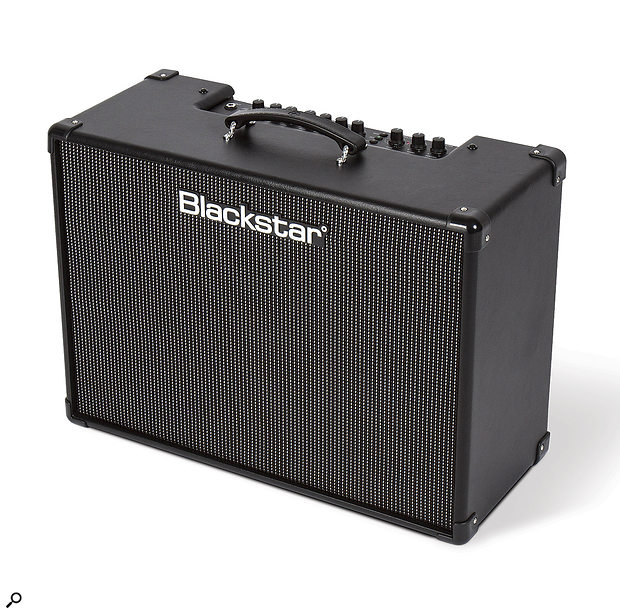 Blackstar are now well established as manufacturers of both valve amps and digital modelling amps. This latest series falls into the latter category, but what sets it apart is the combination of affordable pricing, low weight (12.5kg), built-in looper and range of ‘Super Wide Stereo’ effects. While Blackstar have incorporated their Super Wide Stereo technology into earlier amplifiers, this is the first time it has appeared at an entry-level price in an amp powerful enough for live performance. Both 100W and 150W models are available, each of which has dual 10-inch speakers in a closed-back cabinet.

Both models sport a looper and direct-to-DAW USB recording via a speaker-emulated output. They can accept stereo line inputs via mini-jack, for playing backing tracks that might benefit from the stereo-width enhancement, and there’s also a reamping mode to allow previously recorded guitar parts to be processed via the amp. Detailed editing and storing of patches is performed using the freely downloadable Blackstar Insider software (for Mac and Windows), though you can achieve most things you need to from the amp’s front panel. Settings can be saved as three banks of three patches, which can instantly be recalled, and there’s an optional FS-12 five-switch foot controller that increases this patch count to 36. Another controller, the two-switch FS-13, controls the in-built looper, and this one’s included.

The looper — which, while very simple, covers all the essentials — offers unlimited overdubs, and the amp’s Voice, EQ and effects settings can be changed between overdubs. Another feature new to this Blackstar range is the Octaver, which has been shoehorned into the effects dial by combining the chorus and flanger effects into one modulation section. The Octaver allows the user to select one octave down or an octave up, to create a pseudo 12-string effect.

The amplifier controls are designed to be intuitive to most guitar players, and a rotary switch selects between one of six voices: Clean Warm, Clean Bright, Crunch, Super Crunch, OD 1 and OD 2. These can be adjusted for gain and EQ, and the bass, middle, treble and volume controls are augmented by Blackstar’s own ISF variable tone tweaker, which offers a US ‘tone-stack’ character when turned anti-clockwise and a UK flavour when fully clockwise. All settings except for master volume are saved when you store a patch.

Three illuminated buttons (labelled Mod, Delay and Reverb) select the effect type for adjustment: a red light denotes that the effect is active, they’re unlit when it’s bypassed, and they become green when an effect is selected for editing. Repeated pressing steps between the on, off and edit modes. Variations on the currently selected effect type are explored via a rotary control that’s divided into four sections, each one selecting and adjusting a specific variation. A further Effect Level control determines how much is added to the dry signal or, in some cases, how ‘deep’ the effect is. A Tap button sets delay time or modulation rate as appropriate, with a flashing LED indicating the current tempo. The modulation section covers phaser, chorus/flanger, octave and tremolo, and the delay section offers four delay types, encompassing linear, analogue, tape and multi-tap variations. Reverb offers spring, plate and two different sizes of room.

As with most modelling amps, the controls don’t necessarily reflect the current control value, though there’s a Manual button to allow the amp to do exactly that. Holding the Manual switch for a couple of seconds brings up a basic (nearest string pitch) tuner that uses the effects selection buttons as sharp/flat/OK indicators. To look after patch organisation, there’s a Bank switch that scrolls through three banks with the LED colour changing to show which bank you are in. Three front-panel channel-select buttons allow selection of a preset from within the current bank, and an indicator LED shows if the control positions (gain, volume, bass, middle, treble and ISF) differ from the current patch settings.

As on other Core-series amps, the top panel provides access to a number of useful controls. On this particular model, the chorus and flanger controls have been combined to make room for an additional Octaver effect.

On the rear panel there’s a headphone output with speaker-response emulation — this output can also be used with a Y-cable (stereo jack to dual mono jacks) for direct recording when you wish to capture the effects in stereo. Using this socket doesn’t mute the speaker, so it’s also useful as a DI feed when playing live, though you can turn down the master control for silent headphone practise or DI recording if you wish. A stereo mini-jack provides an MP3/CD input (which can’t be processed by the guitar effects) and there’s also a mono-send/stereo-return effects loop that allows you to hook up external effects and processors, all with the benefit of the enhanced stereo projection. Footswitches connect via a standard jack cable.

In most respects, what you see does what you’d expect, but there are a couple of hidden features that are accessed by using the Tap switch as a ‘shift’ key. When used in conjunction with the bass control, the modelled cabinet resonance can be adjusted. Use it with the treble knob and you have a presence control. Also, the output level of the USB audio signal can be adjusted independently of the amplifier’s speaker volume by holding down Tap and tweaking the gain control. There’s also the option to more precisely control the tap delay/mod rate time by holding down Tap while adjusting the effects level control.

It would be unfair to judge the sound of the amp or its effects too harshly, given that the whole shooting match costs less than some fancy overdrive pedals do alone. However, I did feel the octave-pitching effects sounded somewhat ‘lumpy’ when used polyphonically — should you wish to add bass to a riff or an upper octave to a solo, then you’ll have no problem, but chords often sound a little messy unless the mix level is kept low. Given that the amp’s firmware can be updated via USB, this might be something that can be addressed in the future but, being realistic, top-drawer digital pitch-shifting takes a lot of processing power, and this little amp’s processor is already pretty busy. 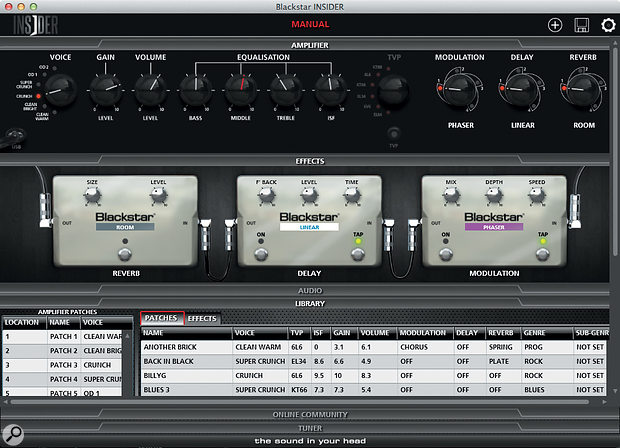 Blackstar’s Insider software allows you to edit more parameters and in more detail than is possible via the onboard controls.

Fortunately, this amp’s positives far outweigh any negatives. Tonally, the amp has less of an in-your-face sound than my own ID:30 combo, but that model has a single 12-inch speaker, whereas the ID:Core 100 has a pair of 10s. The slightly soft-focus sound of the ID:Core Stereo 100 adds a more Vox-like jangle rather than hitting you between the eyes. That said, the clean sounds have a nice valve-like fullness. Classic rock and blues players will like the crunch settings, while the two overdrive options provide a gateway to heavier rock and modern high-gain sounds. That ISF control is also very effective, as it allows you to change the overall character of the amp’s voicing to suit your preferred style. The effects sound magically wide thanks to the stereo processing, and the delays, in particular, seem to come from everywhere.

Overall then, the ID:Core Stereo 100 is a very versatile amp. It sounds good at practice and studio-recording levels, but it’s also loud enough for pub gigs; you can record a version of the sound with speaker-response emulation via the USB or the headphone-jack sockets; you can re-amp tracks you’ve already recorded; and the majority of the effects stand up pretty well against many dedicated pedals — but you can still use your favourite overdrive pedal with the amp if you need to. In short, there’s a lot to like for very little outlay, so it could be a worthwhile addition to the studio if you play guitar.

Other companies offering lightweight analogue-modelling guitar amps include Line 6, Yamaha, Vox and Roland — though I can’t think of a particular model that offers everything this one does in a single package.

An FS-13 two-way foot controller comes with the amp and connects via the supplied unbalanced jack cable. By default this operates the looper, with switch A being used to start and end loop recording. Switch B stops loop playback or cancels the current overdub if still in recording mode. Pressing both switches together undoes the last recording, while holding switch B down when in stop mode erases the loop. The maximum loop recording time seems to be around 20 seconds. If you exceed the loop time the system goes back to the start and plays what you have already recorded.

If looping isn’t your thing, you can press and hold both switches for over three seconds to switch to Patch Mode, in which switch A alternates between the first two patches in the current bank and switch B bypasses or reinstates all the effects. Another three-second dance gets you back to looper mode.

For greater control, there’s the optional FS-12 five-way programmable foot controller, which also expands the maximum number of stored patches from nine to 36 and provides a readout of the current patch name. Switches A, B and C access the three patches in the current bank, and banks can be stepped up by pressing both switches A and B simultaneously, or you can go down a bank by pressing switches B and C together. Switches D and E are user configurable but, by default, they control the looper. If you need to change this, then the Insider software (see box) provides a number of alternative functions such as turning certain effects on and off or bypassing the Super Wide Stereo. Holding D and E together turns on the tuner. A thru jack on the FS-12 lets you link up your existing FS-13. Again, the switch functions can be customised via the Insider software.

No additional audio drivers need to be installed for Windows or OS X to use the ID:Core Stereo 100’s USB audio facility. Once connected, the amplifier appears as an audio-capture device.

The audio format that is fed out via USB can be changed via the free Blackstar Insider software, where there’s a choice of speaker-emulated stereo-width effects, two mono channels (one with effects and one without) or Re-amping. The Re-amping Mode takes a DAW track as its input and returns a fully processed stereo audio signal complete with effects and speaker emulation. Alternatively, you could just mike up the amp and record it ‘old school’.

This amp is versatile, sounds great and — with the pros far outweighing any cons — offers good value for money for the recording guitarist.