By Matthias Fuchs By Sam Inglis 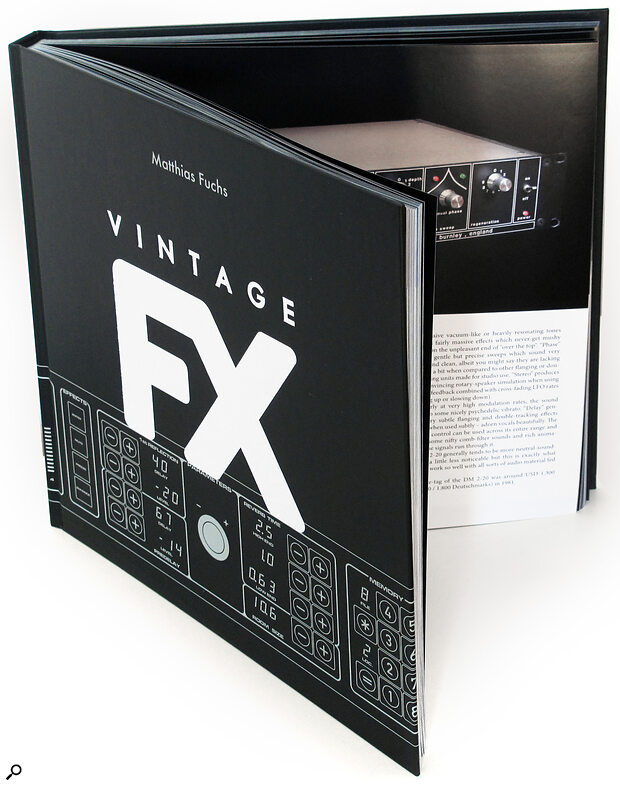 Want to learn about vintage studio effects units? This is a great place to start.

There are endless glossy coffee‑table books about vintage guitars and amps. Likewise, if you want to know about analogue synths, valve mics or classic consoles, there’s plenty of information out there. However, other gear that was plentiful in the past now attracts less attention. That’s hardly surprising in the case of tape synchronisers or MIDI file players, but strange when it comes to studio effects units of the ’60s, ’70s and ’80s. We all know about the EMT 140 plate and the Eventide H3000, but who among us has ever heard of the Sequential Circuits Pro‑FX, the Cyclosonic FS‑1 or the gloriously named Publison Fullmost Relief‑Enlarger?

Matthias Fuchs, that’s who, and he has distilled his knowledge into, you guessed it, a glossy coffee‑table book. Vintage FX (ISBN 978‑3‑00‑071588‑4) profiles nearly 70 different pieces of hardware, from the disc echoes and plates of the ’50s to late ’80s digital devices like the Quantec QRS/XL. These are grouped in rough chronological order within logical categories: delay effects, pitch‑shifters, reverbs, modulation effects, multi‑effects units and ‘various’, which encompasses vocoders, filter banks, enhancers and the like.

It would have been easy to compile a book on this subject the lazy way... Instead, Matthias Fuchs has done it properly.

What’s perhaps most impressive about this book is the research that has gone into it. Even with mega‑rare items like the Dynacord SRS and the aforementioned Relief‑Enlarger, Fuchs has tracked down working examples to make first‑hand descriptions of their operation and their sound, and has posted audio examples on a companion website at www.vintagefx‑thebook.com. He has also made contact with many of the original designers responsible for these units, and their insights add considerably to the merits of this book. Perhaps most valuable of all, though, are the photos. Fuchs doesn’t just reprint old brochures or take ‘artistic’ front‑panel shots: he shows us the innards of nearly all of the devices covered here, in wonderful detail. These leave the reader in no doubt at all as to how the designers of early digital devices such as the EMT 250 were pushing boundaries!

It’s not all about pretty front panels: detailed internal shots of the gear are also included.

There is no mention of any modern software emulations of the devices described here, and one could argue that the pace of change in plug‑in world would have made any such references out of date almost instantly. Nor does Vintage FX claim to be an exhaustive survey. Far more is included than not, but there are some omissions, and of course the line between ‘studio’ effects and those aimed at guitarists or keyboard players is a vague one at the best of times. The English text can also be a little indigestible in places, with expressions rendered literally from the original German.

It would have been easy to compile a book on this subject the lazy way, by paraphrasing material that’s widely available on the Web. Instead, Matthias Fuchs has done it properly. This is a genuine labour of love, and will be essential reading for anyone with an interest in how music was produced back in the day.