The Bryant boffins have come up with a totally unique XLR connector which could be a huge time saver in the studio or live.

The numerous connector formats and wiring standards mean we often need to buy or make dozens of different bodge-leads to cater for all eventualities. RCA-phono to mono jacks, or mini-jack to TRS versions are easy enough to make, but anything involving XLRs immediately requires two sets of leads, along with male and female alternatives to cater for input or output connections. That means more expense, more time, and more frustration when trying to find the right cable in a hurry! 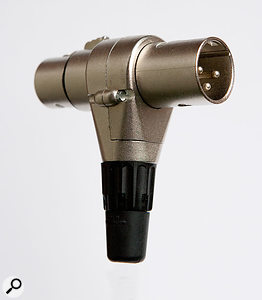 Neutrik came up with a very elegant and fabulously engineered solution to this perennial problem a few years ago in the form of the ConvertCon 'unisex' XLR. This is now widely available from all the usual suppliers, and features an extended XLR barrel in which the outer body slides back and forth to change the connector sex in a most ingenious way. When the outer body is slid to the rear the connector reveals the male pins, but when slid forward the female connector appears instantly and almost magically! Inevitably, this clever engineering is expensive, but remarkably the ConvertCon is only about 40 percent more expensive than the equivalent pair of XLRs, and becomes very cost-effective when the additional expenditure on cable, opposite-end connectors needed to make duplicated leads, and manufacturing time are factored in. More importantly, the immense convenience of having a single-cable solution regardless of the required XLR sex is almost priceless!

However, I discovered a second, very attractive, but little-known alternative a few years ago, which offers even greater flexibility and versatility. The British professional audio and video component supplier, Bryant Unlimited, have, tucked away in their online catalogue, a totally unique and bespoke XLR T-piece connector. This was designed by the Bryant boffins and is constructed exclusively for them by Neutrik themselves, in Lichtenstein. In effect, the Bryant XLR T-piece comprises a standard Neutrik right-angle female XLR socket with a custom back-plate, which grafts a male XLR plug seamlessly into the back of the original socket, so that the assembled whole resembles a male-female XLR barrel connector with a side-mounted cable outlet.

It's totally genius: like the ConvertCon, it allows a bodge cable to be connected either to male or female XLR sockets simply by plugging in the appropriate side of the T-piece in a very convenient and cost-effective solution. But it goes much further than that, because this unique T-piece can also be used to 'break into' an existing XLR connection to access a direct-paralleled output.

I've been using Bryant T-piece XLRs for several years now to make direct mic-splitter cables, for example, and more often still for sharing a signal between two separate devices. Typically, this might be to route the output of a monitor controller to a satellite speaker, with a convenient on-going feed to a sub-woofer, or to share a signal between two recorders or signal processors. It's a much more elegant solution than a hardware splitter box, and the tiny additional cost compared with the ConvertCon is easily justified by the unique versatility. This unique and little-known connector deserves far wider recognition, and I can't recommend it highly enough!