How many times have you wished you had a magic wireless link from your desk to the stage? At some venues it can be a real problem trying to find a route for speaker cables that doesn't cross public access areas or look unsightly, but now the Liberty system could provide the answer...

The Liberty WP100 is designed to do for PA speakers what wireless technology has already done for microphones, freeing them from the need to be connected back to the mixer via cables. The idea has met with general approval, and in fact the Liberty won the award for innovation at the last Professional Lighting and Sound Association (PLASA) show. 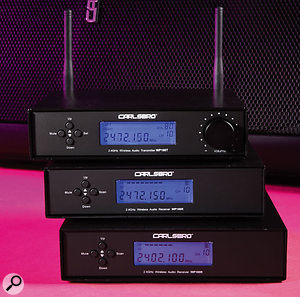 The basic Liberty system consists of a two-channel transmitter and two single-channel receivers (left and right), operating in the 2.4GHz frequency band, which is licence-exempt in the United Kingdom. The receiver end is a true-diversity design, in that that each receiver has two independent antennae and receive circuits, and will automatically switch to whichever is receiving the strongest signal, thus reducing the chances of fading or signal drop-outs.

The transmitters and receivers are almost identical in appearance, being half-rack width and housed in strong metal cases. The units are all powered by external supplies built into moulded 13-amp plugs.

The transmitter (model WP100T) has a nice, uncluttered front panel, dominated by a large, blue, backlit LCD. The display shows the transmitting frequencies being used for left and right channels (it cycles between the two), and incorporates two horizontal segment meters that indicate RF (Radio Frequency) and AF (Audio Frequency) signal level. In the top right-hand corner of the display is a numerical volume indicator reading 1-80. Finally, there's an indicator showing which radio channel — of the 50 available — the system has been tuned to. 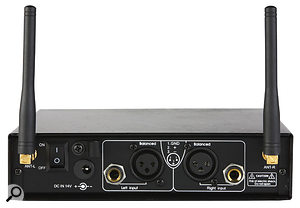 Transmitter rear panel.Photo: Mike CameronTo the left of the front panel are four small buttons that are used to set up and mute the transmitter. The Mute button blocks output from both left and right transmitters and results in a 'mute' indication appearing in the lower right-hand corner of the display screen. The 'Set' button is used to select the RF channel to be used: you simply press and hold until the channel indicator starts to flash, then use the remaining two buttons ('Up' and 'Down') to bring up the required channel, before one final press of the Set button locks in the selected channel. On the right of the front panel is a rotary volume control, which adjusts the audio output level sent to, and consequently output from, the receivers.

The rear panel of the transmitter is similarly neat and cleanly laid out, providing left and right audio signal inputs, RF (antennae) outputs, a DC power input jack, and an on/off switch. The audio inputs are on balanced XLRs and unbalanced standard jack sockets for each channel, and there's a small plastic cable clamp (intended for installation use) that prevents the power lead from being accidentally disconnected (although I found that the connector has quite a good positive action). The antennae connectors are miniature threaded 50Ω types that are a bit fiddly at first — you need to be very careful not to cross-thread or over-tighten the brass collar nuts — but are nice and solid when the antennae are fastened in place.

The antennae themselves are quarter-wavelength, rubber coated and slightly flexible. They have quite a robust feel and they're easy to fit and adjust into position; the handbook recommends that they are aligned vertically, which is OK unless you want to stack the units for some reason, in which case they must be slightly offset.

The WP100R receiver looks very similar to the transmitter, except that it doesn't have a rotary volume control and features just one balanced XLR/unbalanced jack audio output on the rear panel, instead of two audio inputs. On the front panel, the Set button is replaced by a Scan button, which operates exactly like the transmitter's Set function for manual channel selection, but also gives you the option of automatically scanning through all the channels until it finds a strong signal — ie. the one coming from the transmitter.

On the receiver, the display reads received RF and audio signal level, and there's a diversity indicator that shows whether the 'A' or 'B' receiver path is being used at any time. Both balanced and unbalanced outputs are at line level and the level is always controlled from the transmitter: no volume adjustment is provided on the receiver itself.

The Liberty units have a very businesslike look and feel, and I assume that transmitters could be mounted in a rack, subject to optimum antennae placement. The (very cool) blue displays are easy to read and all the controls are obvious and simple to operate.

The Liberty system is very quick and easy to set up. I used it to connect the output of my mixer to a pair of powered speakers. Having pre-set the transmitter and receivers to a common channel, it's simply a matter of plugging the three boxes into a mains supply and connecting four signal leads: the stereo outputs of the mixer to the transmitter inputs, then the receiver outputs into the powered speaker inputs. It's a bit quicker than running 20-metre cables and there's no tidying up or trip hazard to worry about — and because I was using active speakers there was already a mains power socket alongside each of them to plug the receivers into. The only problem I can see with locating the receivers at the speaker position is finding a high enough spot for them. They really need to be above audience head height for a live sound gig, and there isn't usually a convenient shelf sticking out of the wall right next to your speakers. They can, of course, sit atop the cabinets themselves, providing the cabinet top surface is fairly flat, but the power leads supplied are not quite long enough to facilitate this, so you'd need a mains extension lead situated somewhere above floor level. The neater way of using the Liberty system on the main PA would be to have the receivers at the side of the stage with a direct line of sight to the transmitter, then run cables from them to the amps or speakers — which isn't quite so convenient but still avoids a physical connection between the desk and the stage equipment; provided you were using only radio mics as sound sources, you would then have a truly wireless front-of-house control system. 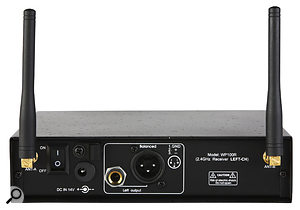 Receiver rear panel.Photo: Mike CameronAs I don't often run an all-radio mic rig, I wouldn't necessarily need a wireless link back to the PA, as I'd already have a multicore in place, but there are many other applications where this system would prove very useful. If a remote monitor position is required for cues (in a theatre production, say), or to provide additional coverage (say, delay stacks) for a large event, you could easily set up a second PA and link it using the Liberty system, thus avoiding the need to install and protect — and eventually recover — long cable runs. Using this system also allows you to move your additional speakers after everything has been set up, without having to re-route signal cables and disturb the event layout. Another advantage is freedom from the interference that might be picked up by over-long cable routes, or where you have no option but to run signal lines alongside power or lighting control wiring.

You do need to maintain a line of sight between transmitter and receiver, especially when operating at longer ranges. I tried the system indoors and found that it would work through two brick walls, but with a much reduced RF signal level at the receiver. In the open air the range is very good, and I obtained good, usable performance over an open-field range of over 100 metres with no problem — the threshold for dropout-free reception appeared, in this case, to be three segments showing on the RF level meter.

I really like the idea of having a Liberty system available as part of my PA resources, and I can think of a few gigs in this year's diary where it could be very handy, especially at outdoor events where the speakers are located at some distance from the performing area — always bearing in mind the need for mains power at the receiving end, wherever that may be. I recall one particular town carnival gig where a single speaker was required on the other side of a busy road and cables were out of the question; last year we just had to admit defeat but this year I think the mayor might be well impressed.

There are also everyday business applications for a high-quality wireless link. For example, on a site with one or more outbuildings you could easily extend the main building PA to these, so that announcements and so on could be heard.

As far as sound quality is concerned, there are no issues with the Liberty system. I heard nothing to suggest that the impressive specification isn't completely borne out in practice. It's stable, it's quiet, and it sounds just as good as my usual XLR cables!

Having spent some time playing with this system, I think it's well designed, well constructed and could provide a useful get-out-of-jail-free card in a mobile PA rig. For a live sound event using only radio mics, the Liberty would be the icing on the cake, and would allow a completely snake-free environment. There's also the option of using one channel for a mono front-of-house mix and the other for a monitor mix. If I had enough 'radio' gigs to justify it, I'd probably use two or three of these systems, so that I could have more foldback mixes. The main issue for on-the-road use would be finding a suitable position for the units themselves — high enough to avoid being blocked by people, yet close enough to mixer and amp/speakers to be less of an overall hassle than running cables. At many smaller gigs the mixing position isn't elevated, and this could compromise the placement of the transmitter antennae.

As a means of extending PA coverage by linking in additional remote speakers, this is a near-perfect solution and is limited only by the need to have mains power available. Would I like one? Hmmm... (thinking of the carnival gig and an impressed Mayor) ...yes. Someday it could just turn out to be one of the most useful things I ever bought.

A good quality, easy-to-use system which extends the functionality of a mobile PA and provides a neat solution to cabling problems in many fixed installations.