Whether you prefer to record your sounds cleanly or with coloration, the Cartec Pre-Q5 can deliver the goods. 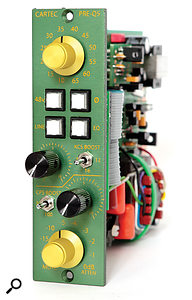 Cartec's young mastermind Liam Carter earned high praise for his first product, a recreation of the venerable Pultec EQ, and has quickly established Cartec as a respected maker of high-quality audio tools. Like so many manufacturers, the Manchester-based company have now taken their first steps into the API 500-series market, with two original modules that build on the classic Pultec circuits: the Fe-Q5 is an inductor-based EQ with high-pass filter; and the Pre-Q5 reviewed here, combines a discrete mic and line preamp with two bands of passive EQ.

It can be nice to have bonus features with a preamp, especially when they provide tone-shaping options, but cramming more than a simple, very basic circuit into a 1U 500-series module is a delicate task — which is one reason why most single-slot 500-series units are a preamp, EQ, or compressor, but rarely more than one of these things at once. The Pre-Q5, though, does exactly this: a preamp section offers up to 65dB of gain (in 12 5dB steps between +10 and +65 dB), and this is accompanied by two EQ bands, derived directly from the Pultec EQP1A's filter network. Despite all this, the front panel is clean and uncluttered: three push-buttons, backlit with green LEDs to stay true to Cartec's colour scheme, offer basic functions: phase reverse, EQ bypass, and a -15dB pad for line signals. A fourth button with a red warning light activates +48V phantom power.

A key to the Pre-Q5's tonal versatility is the output attenuator, which is governed by a rotary switch. There are countless preamps on the market that provide very pleasant saturation artifacts when driven hard, but taming those hot levels seems to be an issue for many designers. Useful little helpers like the Little Labs Redcloud passive attenuator have been designed to solve such problems, but they're not exactly cheap — and of course it means adding yet another device in the signal chain that might require attention in hectic tracking situations.

Intriguingly, Carter has chosen to place the attenuator after the output transformer. Early units employed an H-pad resistor network to provide matched attenuation on each side of the balanced signal, but that only allowed for six steps of attenuation. The current design instead uses a resistor ladder to create a voltage divider with 10 steps (0, -1, -2, -3, -4, -5, -10, -15 and -20dB attenuation, and full mute), and it presents a constant load of 10kΩ, just as a channel fader on a console would. It's a rare — and possibly unique — approach, the result of which is that you can drive the transformer-based output stage into saturation without overloading the next device in the chain.

But the Pre-Q5 is more than just a preamp with interesting saturation capabilities. The EQ section's circuitry has been borrowed from Cartec's rackmount EQP1A, although it offers fewer options. It is still surprisingly powerful, though, considering that it's controlled only by two potentiometers and two tiny toggle switches.

The high band is a bell filter and allows boosts at 8, 12 or 16 kHz. According to Cartec, it works exactly like the high boost in the EQP1A at these frequency points when the bandwith control is set to the widest position. This results in a bandwith of three octaves, or a Q factor of approximately 0.4. Similarly, the low band resembles the bass boost of the original Pultec design: a shelving filter that can be set to corner frequencies of 30, 60 and 100 Hz.

Of course, in the Pultec, both cut and boost are available at the same frequencies, affording you masses of control over your tonal sculpting. You don't have that luxury here: you only get the boosts, with no cuts. Yet I don't see this as a problem at all, because when using the Pultec, I frequently use only the boosts during tracking, just to brighten up a source or to add more weight and body to a signal — which is exactly what's on offer with the Pre-Q5. And since the filter curves are ultra-wide and smooth, you can never do any real harm with them. In my view, this particular layout forms an ideal tracking EQ, and even though it looks very limited upon first glance, I didn't feel that I was missing any features in practice.

That said, a high-impedance instrument input would have been a nice addition, as I'd love to be able to track electric bass, in particular, with this module. My guess is that the absence of this is due to the lack of available space on the faceplate. As things stand, for instrument recordings you'll need to use an external DI box — but that's no great hardship. 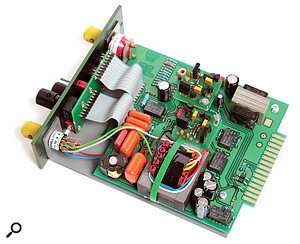 Two transformers, two discrete op-amps (on socketed daughterboards) and one inductor are the important parts inside the module.Photo: Hannes Bieger

Like many competitors, the Cartec Pre-Q5 is an open module, which means it's easy to see what's going on inside. (Physical protection is provided by the 500-series rack once the module is mounted, of course, and the open chassis design aids heat dissipation.) The signal path runs through high-quality components. Firstly, it flows through the line pad, and then the input transformer. A Grayhill rotary switch sets the gain, which is then amplified by the first discrete op-amp block. Next in the chain is the passive EQ circuit, encompassing an RC filter for the low frequencies and an inductor-based LC network in the high band — just as you'd expect from a Pultec-type design. After the EQ, there's another discrete op-amp, followed by the output transformer and, finally, another Grayhill switch serving as the passive line pad discussed earlier. Both the transformers and the inductor are custom designs, manufactured in England to Liam Carter's exacting specifications. The entire module is a very sturdy construction, and both the potentiometers and the rotary switches feel very solid. In short, I'm in no doubt that the Pre-Q5 should serve reliably for a very long time.

There's no magic to the controls, and anyone remotely familiar with the basic concepts of sound recording will be up and running with this module in no time. The faceplate has a very clear layout, and the backlit switches provide a good overview of the current operating status. I especially like the fact that the +48V switch has a red LED (in contrast to the green ones of the other switches), making it less likely that you'll hot-plug mics while phantom power is activated.

Without saturation, the gain of this preamp is very clear and direct. The Pre-Q5 yields a very tight and focused signal that means multiple tracks 'stack' well, even in a full arrangement. These qualities make the Cartec a good, versatile, all-round choice for all kinds of signal sources. Being picky, a very soft, intimate female voice in a sparse arrangement might benefit more from a softer-sounding alternative, but if your recorded signal has to stand out in a modern-sounding rock or electronic production, the Cartec provides all the tightness and contours you'll ever need.

But the Pre-Q5 can do more than providing 'simple' amplification, as its nicely focused sound can be enhanced using the EQ section, and this often comes in handy. The filters provide a very healthy boost at a total of six well-chosen corner frequencies. The highs generally sound round and smooth (and, importantly, they do so even at higher amplitudes), and the bass band produces equally pleasing results.

The most interesting feature of the Pre-Q5 is probably the most difficult to understand: the passive attenuator after the output transformer. A user manual would be helpful to explain what this feature can do and what's not possible. (A manual was not available at the time of writing, but, according to Liam Carter, it should be finished shortly.) Using saturation normally is a very easy thing to do: you crank the input to the circuit until you hear some pleasing overtones, you adjust the output level so that the next device in the chain does not get overloaded, and then you call it a day.

But, in practice, the Pre-Q5 is not a distortion box that you'd use like, say, an average guitar pedal. An audio transformer predominantly saturates the lowest frequencies (usually 100Hz and lower), as these have more energy than higher frequencies. As soon as the transformer is approaching its maximum magnetic flux capacity (which is mostly determined by the size and the material of the transformer's core), it begins to saturate, adding mostly third-order harmonics, similar to analogue tape.

Since this is only effective to the lowest of frequencies, the audible effect can be quite subtle, depending on the character of the input signal. And this is why this feature of the Cartec can actually be quite dangerous at times: especially when you attenuate the output and crank the input on a hot line-level signal, you might exceed the dynamic range of the preamp's op-amps before you even hear any transformer saturation. In contrast to the transformer, the op-amps break up extremely fast after a certain point, resulting in a nasty odd- and high-order harmonic distortion. However, this is not a design flaw. Rather, it's an issue that can't easily be overcome in a one-slot 500-series unit, as there's not the space to accommodate the necessary DC:DC converter circuitry. This means that the preamp needs to operate using the ±16V rails of the frame's power supply, and that supply dictates the maximum signal amplitude of the op-amps used in the module.

What this boils down to is that when you use this feature, you simply need to be careful beyond a certain point and trust your ears, as the passive attenuator can allow you to push the preamp out of its headroom comfort zone. But on the right signal (for example, listen to the Minimoog sub-bass file I've made available with other audio examples on the SOS web site at /sos/aug12/articles/cartecpreq5media.htm), the output transformer's saturation can provide more 'grip' and a pleasing density. It's a very useful tonal shaping option to have.

The Cartec Pre-Q5 combines all the ingredients I'd expect to find in a high-quality all-rounder mic preamp, in one diminutive package: it's sturdy, with reliable construction and a rich yet very focused sound, and (the lack of instrument input aside) it has the bells and whistles that are necessary to make it stand out from the crowd. The rare approach of placing a passive attenuator after the output transformer yields great results when used on the right source. For a British-made 500-series preamp and EQ of this quality, with all the sonic options that are available, the price is more than fair.

There's a handful of 500 series units that offer both preamp and EQ sections, though not all in a single-width module. The AML EZ1073 and Heritage Audio 1073/500 are recreations of a Neve design, so they follow a rather different concept at a higher price. Almost twice as expensive is the La Chapell Audio 583e, which features tube stages and a three-band EQ in a double-width module. The AEA RPQ500 comes much closer to the Cartec in terms of both features and price, and the Lindell Audio 6X500 appears to offer similar functionality too.

A great tone-shaping preamp for the ubiquitous API 500 format. The combination of a discrete transistor preamp and simple, yet rich-sounding Pultec-type tone controls, along with the possibility to drive the output transformer into saturation, offers ample sonic variety while tracking.