Desert Winds focuses on just four wind instruments, but does so in magnificent detail, each featuring up to six different natural legato types. The warm and slightly nasal tones of the Armenian duduk are wonderfully evocative, while the Persian and Turkish ney are both end-blown flutes. The main difference between these is that the Turkish model has a more traditional mouthpiece, while the Persian version is played via the top lip, tongue, and gap between your two front teeth. The zourna is different again, with a flared tube rather like a conical oboe and a double reed that produces a piercing tone. Together, these four wind instruments cover quite a lot of sonic ground. 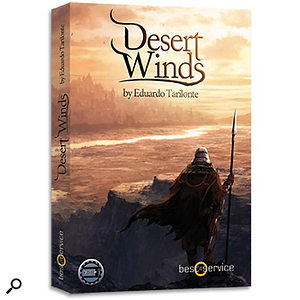 As we've come to expect from this series, there's wonderful attention to detail. A variety of mordents, ornaments and trills are available to each instrument via keyswitching, and you can even control the vibrato speed via a MIDI controller, for additional expression. However, the stars of the show are most definitely the real legato recordings. Depending on the instrument, up to six different types are available, from portamento to various velocity-switched layers accessed via the mod wheel.

Anyone who's tried scoring wind-instrument solos with individual note samples will know how difficult it is to make note transitions that sound natural, but using Desert Winds is like having the performer inside your computer, doing all the hard work for you!

In addition to the carefully tuned versions designed to fit perfectly into Western scores, each instrument also features a folder containing microtuned versions conforming to various Arabic and Turkish scales, which makes it easier for you to achieve more traditional and realistic results. The duduk is also traditionally played in pairs, with one instrument providing a continuous drone derived from circular breathing, so a basic second instrument is provided for this function that takes far less RAM. Meanwhile, the two neys and zourna each offer between two and four release options, for added expression possibilities.

To support the stars of the show are 21 bonus soundscapes, each featuring between two and six layers for rich, evolving timbresm and together conveying a wonderful feeling of drifting desolation in keeping with the desert theme. Haunting flutes, natural struck and scraped percussion and voice drones, underpinned by a chorus of gently moaning winds, all have lots of internal detail but don't dominate the track. This will be much appreciated by professional musicians who want to avoid instantly recognisable sounds in their work.

With each new release in this series I half expect creator Eduardo Tarilonte to run out of fresh ideas and not warrant our top five-star rating, but he's managed it again. Indeed, I suspect that many film, TV and game-scoring musicians will approve of the move from epic soundscapes to a smaller and more focused set of deeply sampled instruments, along with a slightly lower price. All this, combined with scene-setting soundscapes, adds up to a top-notch release! Martin Walker