The loudspeaker is a major contributing factor when it comes to guitar tone, so it's no surprise that there's a healthy upgrade market, with companies trying to sell you new speaker models for your amp. The problem is that tone is a subjective thing, and like everything else in the guitar signal chain, the tones we know and love were born of technical imperfections. Early guitar amps were fitted with cone loudspeakers but not tweeters, so the frequency response dropped off quite steeply above 3‑4kHz. This filtered out some of the less pleasant harmonics generated by the tube distortion that resulted from trying to get too much volume out of too small an amplifier. 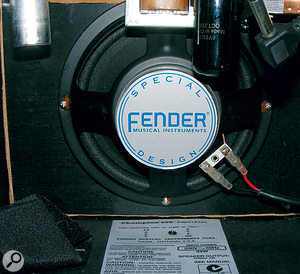 The default speaker in a Fender Champion 600.Without the technical limitations of guitar speakers, tube distortion would sound gritty and unpleasant, and this is why, despite the advances in speaker design, today's guitar amplifiers still employ limited‑range cone drivers and don't use tweeters. The main difference today is that the manufacturers know more about why old speakers sounded the way they did, and they're able to design new models that offer specific voicings. 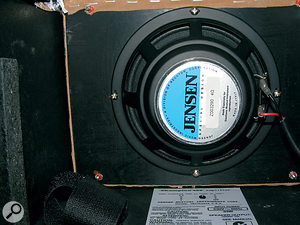 The same amp with a Jensen speaker: a very different sound, with break‑up starting at a different level.

The sound of a speaker is determined mainly by its cone and magnetic motor design. Twelve‑inch speakers are the most popular for use in both combos and four‑driver cabinets, although some players prefer the less bassy sound of a 10‑inch speaker. Many speaker cones are made from simple, doped paper, but some use alternative materials, or paper mixed with other types of fibre. Smaller practice amps with even smaller speakers can sound good, especially for recording, but the bass end is likely to be less powerful than with larger speakers. Many of the very early tube practice amps (typically 5W, Class A) had elliptical TV‑type speakers with thin paper cones, some of which distorted very nicely when pushed hard.

Part of a speaker's character comes from the way its cone flexes when pushed hard, which designers call 'break‑up'. This has nothing to do with damaging the speaker, though: its movement differs from that of a pure, rigid piston, as its surface deforms and ripples to form modes. Thinner, lighter cones tend to break up more readily, introducing more distortion, and may also make the sound seem slightly compressed. Higher-powered speakers often use heavier cones to enable them to remain rigid at higher SPLs, so they may not break up as readily.

Some cones are made with a number of concentric circles moulded into them, the purpose of which is to allow the centre of the cone to move more freely at higher frequencies, by mechanically decoupling it from the outside of the cone. However, this design approach must also have an effect on bass sounds, as the rings will tend to compress in a concertina‑like fashion when the cone moves any significant distance, so, again, distortion and level compression will result. Even the centre dust‑cap makes a difference to the sound, depending on whether it is acoustically porous or an impervious material: speakers with a metal dust‑cap often have a harder‑sounding treble than those using fabric. 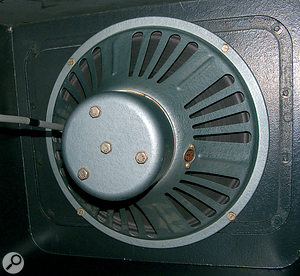 You may not have to spend a fortune: this cheap (£5)eBay purchase is a vintage Bell & Howell speaker, intended for use with film projector systems, but offers a very different flavour from the same amp.

The way in which low frequencies are handled also depends on how well the cone assembly is damped, which itself depends on both the cone material and the surround. If the cone has a tendency to overshoot, the bass will sound loose, whereas a well‑damped speaker will produce a tighter‑sounding bass. A high power‑rating usually requires a larger voice‑coil diameter, and this extra mass also affects the sound by beefing up the bass end and rolling off a bit more top. If you'd like to change your amp's tone in this direction, you can sometimes achieve it by fitting a higher‑powered speaker, even if you don't need all that power handling: I did this with my own Vox VT30 combo by switching to a 100W Celestion speaker, and was rewarded by a warmer, more 'springy' tone.

It's interesting to look at the way that US and European pop and rock sounds have developed differently because of the types of loudspeaker available to manufacturers during the 1960s and 1970s. The classic British speaker used in early Vox and Marshall amps was made by Celestion, and many early 4x12 cabinets and combos were fitted with relatively low‑powered drivers. These speakers have a lively sound, in which the high end comes over without being too 'gritty'. By contrast, the US sound was built on speakers made by companies such as Eminence and JBL, which resulted in a somewhat harder sound and a slightly more 'abrasive' high end. These tonal choices may not have been intentional, but they've become enshrined into our musical subconscious.

Some of the early guitar speakers were relatively inefficient, which meant that you had to put a lot of power in to get the sound level you needed. Todays speakers are much more efficient, making high amplifier power less of an issue. Neodymium is less costly than it was and enables very efficient magnetic motors to be built, due to its very high magnetic flux. Alnico is an effective but expensive magnetic alloy (aluminium, nickel, and cobalt) and is cited as producing a slightly compressed tone. If all this sounds oddly familiar, it's because similar discussions take place when it comes to guitar pickup magnets and their effect on sound. As with guitar pickups, ceramic magnets are the cheapest and consequently widely used, but equally important is the actual magnetic flux that can be achieved inside the voice‑coil gap, and that depends on other design factors, such as the arrangement of the magnets and the gap width. In other words, you can't predict the sound of a speaker solely by checking what kind of magnet it uses: all the factors of cone and magnetic‑motor design influence the sound.

You needn't use identical speakers with the same amp, but do make sure that the speaker efficiency of both is similar — because otherwise one will dominate the sound.

When it comes to swapping guitar speakers, you need to replace a speaker with one of the same impedance and a suitable power rating. You may also need to check that the bolt holes match up, because not all manufacturers use the same layout. If the guitar cabinet is open‑backed, you have plenty of freedom over what type of speaker to fit, as the cabinet volume isn't tuned to the speaker characteristics, but in the case of sealed cabinets and, in particular, bass amps (sealed or ported), you may need professional advice about what speakers are suitable, because the mechanical compliance or springiness of the speaker must match the cabinet volume. Can you mix and match speakers in a cabinet? In cabinets with two or more speakers, you can mix speaker types, as long as the impedances are correct, but ensure that the speaker efficiency is similar, or the most efficient one will dominate the sound.

Choosing a replacement speaker is made more difficult in some ways, because many manufacturers now build models that purport to emulate the sound of classic speakers from other companies. Ironically, amp modelling software can help you in that choice, because you can audition amp models with different speaker cabinets, and even though the results may not be entirely accurate, you can at least get an idea of which ones sound tight, which ones sound compressed, which are harsh and so on. When you've narrowed down your choices, you can then look up the actual speaker cabinets on the internet and find out what drivers they use.

In short, the quest for tone is not an easy one, but it certainly pays to be aware that the loudspeaker plays a major part in the sonic equation.  Paul White