Thinking of investing in a compact PA? Then you might want to consider a mini line-array system! Here's a selection of current options, with links to SOS reviews where available. 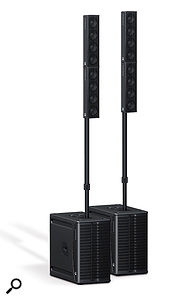 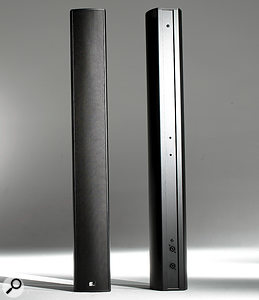 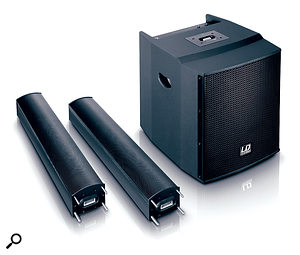 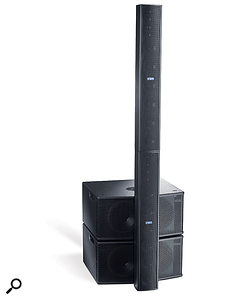 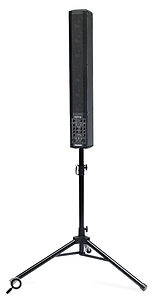 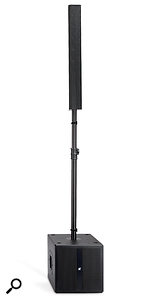 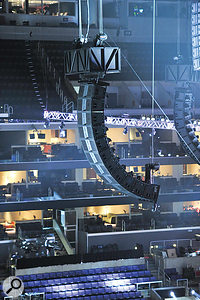 If you've been to a large-scale concert in the last few years, you'll probably have seen PA system like this one — and the same principles are at work here as in the current crop of compact column speaker systems.

This premium setup from German makers HK scores highly on both sound quality and modularity. Systems in a wide range of sizes can be made up, using as many or as few boxes as needed, according to the space you need to fill. Conveniently, the mid/tops take their power directly from the subwoofer.

The eight four-inch 'woofers' and one-inch compression driver endow the LX100 with a healthy 65Hz-20kHz frequency response. It's passive, so requires an amp, but it can happily be fed from one of Fohhn's own active subwoofers.

The Maui's big selling point is that it is remarkably easy to set up. Most of the systems here require that power and audio are plugged into each box individually, but in the Maui, the tops are passive: all their power and audio signal comes from the subs, into which they connect, and which also serve as speaker stands.

The L1 Compact is a cut-down version of Bose's flagship L1, launched in 2003. Bose envisage each musician in a band having their own column, with that column also serving as a monitor. To this end, each column comes with its own digital controller, which has various instrument-specific DSP presets. The system can also be used as a conventional front-of-house PA, however.

The CAL, or Column Array Loudspeaker, is intended primarily for vocals, especially in reverberant spaces where conventional PA speakers would likely become unintelligible. Unusually, its directivity can be digitally 'steered' to suit its environment, and to minimise unwanted reverb.

The active Vertus system can be configured with as many tops or subs as needed, and a range of mounting hardware (including a 'dummy' elevating speaker) is available. It is well built, discreet, and more powerful than you'd expect given its size.

The Solo SA220 offers two channels of mic or line input with switchable phantom power. As the name suggests, it's designed for use by solo musicians (singing guitarists and the like), who don't need a subwoofer for massive bass reproduction. Its built-in mixer has a three-band EQ on each channel, plus an onboard digital reverb.

The KB1 active PA system incorporates extensive DSP within the subwoofer, including system tuning and a digital mixer for the four audio inputs, which provides effects and dynamic processing. It even has a headphone socket and an auxiliary out, so where only a few sources are being amplified, you could use the KB1 on its own, with no other components needed.

The idea of arranging drivers in a vertical line isn't a new one, but what advantage does this approach offer?

You're probably be used to PA systems being heavy, cumbersome and difficult to transport — but they don't have to be, as the recent resurgence in 'column'-format PA speakers proves. The designs on the previous pages are all compact and lightweight, which not only makes them easier to take from gig to gig, but also simplifies setting them up and positioning them in a venue. What's more, for gigs where the PA system must be discreet and unobtrusive, small column arrays are pretty much ideal.

But there are other reasons to go with such a system, some of which might be even more compelling. To fully appreciate them, though, requires a little understanding of the physics involved...

Picture a single speaker cone in a cabinet. When it reproduces sound, it does so in a fairly 'uncontrolled' way, which is to say it fires sound up, down, left, right and centre! Now, put that speaker in a room, and you can easily see how that might not be an advantage: the audience members in the room not only hear sound coming from the speaker, but also the same sound being reflected off any hard surfaces, including the floor and ceiling (you need only read one or two of our Studio SOS articles online to understand that this is a Bad Thing).

What's more, as you move further away from the speaker, that sound gets quieter relatively rapidly. More precisely, the sound pressure level halves every time your distance from the speaker doubles. This phenomenon is known as the inverse-square law and, without going into too much detail, it comes from the fact that a single driver will tend to radiate sound in a more-or-less spherical manner. Obviously, this bodes ill for anyone standing at the back of a venue, who will experience a much quieter gig than someone at the front!

But most PA systems don't have just one driver — at the least, they'll have two, including a tweeter for the high frequencies. To negate some of the adverse effects of sound reflections, tweeters are usually mounted in something called a waveguide: an acoustically designed 'funnel' that focuses the highs so that they fire in a much tighter beam. The down side to this is that, if you're standing directly in front of the speaker, you'll hear all of the treble it's designed to reproduce, but move to the side a little and the highs you hear will be much reduced, leaving you with a rather muddy sound.

In sum, you've got sound bouncing off the floor and ceiling, high frequencies that only serve a relatively small section of the audience effectively, and a sound that decreases in volume rapidly towards the back of the venue. So, what's the solution?

In the late 1950s, a very clever man called Henry Olson discovered that placing several drivers one on top of the other had a remarkable effect on their combined sound. In short, arraying drivers in a column meant that sound shot in a very tight beam vertically, but a very broad beam horizontally — essentially in a cylindrical shape, rather than a sphere. In the context of our gig room, this means sound being spread evenly from left to right (ie. towards the audience), while avoiding the floor and ceiling and, therefore, those unwelcome reflections.

So far so good, but there was one other effect that would prove particularly useful in a concert setting: the fact that columns project in a cylindrical pattern meant that the inverse-square law no longer applied, meaning that the drop in sound level experienced when you moved away from one of these columns was greatly reduced.

For many years now, this type of speaker arrangement has seen regular use at festivals and stadium concerts (where you'll typically see long 'strings' of cabinets hung vertically on either side of the stage), as well as in churches, where the reverb inherent in such large, cavernous spaces can easily render 'normal' PA systems completely unintelligible. And now this technology is finally within reach of small-scale PA operators and gigging bands!