Hatsune Miku is the name of a fictional 16-year old girl, who can be made to sing using Yamaha’s Vocaloid 3 engine. For those of you not familiar with Vocaloid, it is a kind of synthesizer which lets users create notes in a piano-roll environment, assign a virtual vocalist to the notes and then treat them with naturalistic articulations such as vibrato. 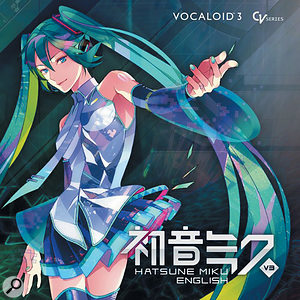 Although Hatsune Miku is powered by Vocaloid 3, users interface with it via a VSTi called Piapro Studio, which is a little more user-friendly and runs as a plug-in within DAWs. In fact, a copy of PreSonus’ Studio One DAW comes as part of the bundle, so that Piapro has something suitable in which to run!

Within Studio One, Piapro Studio appears as one of the ‘instruments’, and when selected, it opens in its own window, just like a typical plug-in effect. From there, working with Hatsune Miku is simply a matter of creating a new Vocaloid 3 track within the Piapro Studio window, defining a work region and then entering notes on the piano-roll display. Indeed, Piapro looks and feels very much like the kind of piano-roll environment seasoned DAW users will be familiar with.

The left-hand side of the interface provides a series of expression buttons, each of which opens its own automation track when clicked. All the user then has to do is draw the curve they want at the appropriate place relative to the notes. For example, in the Dynamics track, the level of the vocal can be increased as a note progresses simply by using the pen tool to draw upward from the start of the note. Other expression options include Breathiness, Velocity, Brightness, Clearness, Opening, Gender Factor, Portamento Timing, Pitch-bend and Pitch-bend Sensitivity. Control is also given to the depth and rate of vibrato.

Fine tuning the expressions obviously takes a bit of work, but it is surprising how easy they are to rough out and it doesn’t take a huge amount of effort to get something sounding vaguely humanistic.

Despite all the editing options, the Piapro page looks fairly simple and is designed so that editing feels like an intuitive process. Notes can be dragged up and down the scale, forward and back in time, and double-clicking them brings up a page on which their pitch, dynamics and (when lyrics have been input) pronunciation can be adjusted. Then, once a track is taking shape, multiple harmonies can be applied by duplicating the track and dragging all the notes to the required position.

Ultimately, Hatsune Miku is always going to sound a little bit electronic, no matter how much expression is applied, but that’s not necessarily an issue. Pop productions often feature real vocal performances that are processed with tools like Auto-Tune to make the voice more electronic sounding, so Hatsune Miku is ideally suited to certain kinds of pop!

In Japan, for example, users of Hatsune Miku have taken things to extremes by creating spectacular stage shows featuring animations of the character singing on stage, accompanied by vocal arrangements and live musicians, and these can be seen on YouTube by anyone interested in witnessing what Piapro can do for virtual-reality lovers.

But, generally speaking, Hatsune Miku is a flexible vocal synthesis tool which should interest composers of dance and electronic music who are looking to add something a bit humanistic, or perhaps a bit robotic, to their tracks.

Mastering Essentials Part 3 - How loud should I master?
4 days 4 hours ago.