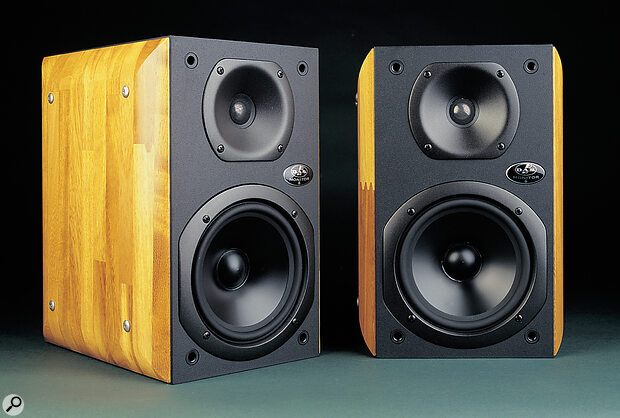 Spanish loudspeaker manufacturer DAS have launched two nearfield monitors with more than a hint of luxury about them. Hugh Robjohns sits back and listens...

It sometimes seems as if there must be nearly as many different nearfield loudspeakers as there are home studios in England and Wales — and here we are again looking at yet another pair, this time imported from a relatively little‑known company in Spain. The manufacturer, DAS (an acronym that translates roughly as 'Dynamic and Sound') is based in Valencia and has been making loudspeakers since 1972. Initially, the business concentrated on hi‑fi speakers but gradually moved into PA products in the early 1980s. DAS continue to build their reputation in this field today, making a lot of OEM products as well as speakers with the DAS badge.

However, DAS are not simply box manufacturers putting other people's drivers into their cabinets. The company makes its own cone loudspeaker drive units and compression drivers, using all the popular techniques such as edge‑wound, oversized coils and so forth. They also design and make their own horns and cabinets, power amplifiers and all the associated signal‑processing equipment too. 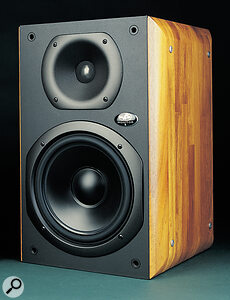 The Monitor 8, although technically possessing greater bass extension and power‑handling capability, seems to have less ability to resolve fine details in complex mixes.

The company's latest offerings are two sets of nearfield studio monitors called the Monitor 6 and Monitor 8 — the number referring to the size of the bass driver in inches. The two models are essentially identical in all other respects, although the 0.75‑inch 'soft‑dome' tweeter in the Monitor 6 is replaced with a one‑inch version in the Monitor 8 to allow greater power handling.

In both cases the reflex cabinet is constructed from 15mm MDF with a two‑inch port venting to the rear near the top of the back panel, to minimise the audibility of air turbulence ('chuffing'). A pair of M6 threaded sockets on the base allow the speakers to be secured to stands. Natural Iroko wood panels, looking like chunks of parquet flooring, are secured to the two sides with Torx bolts, and transform the product from just another black nearfield speaker into an attractive piece of furniture. The cabinet is designed so that the external Iroko panels add stiffness and damp down any side‑panel resonances.

The Monitor speakers can be used with or without the detachable black fabric front grille — the tweeters are protected by an integral fine wire mesh screen. The promotional literature refers to the tweeters as soft‑dome devices although, in fact, they employ aluminium diaphragms with ferrofluid cooling. The tweeter is set back from the front of the baffle at the neck of a 'Linear Quadratic Spherical Waveguide' (LQS) — a shallow dished waveguide designed to control the directivity of the tweeter. The LQS is a bespoke design, but looks and performs in exactly the same way as similar waveguides employed in nearfield speakers from the likes of Genelec, JBL, Mackie and Yamaha, for example.

The bass drivers are built on a cast‑aluminium chassis with an oversized motor coil intended to bestow a fast impulse response and provide high efficiency. The cone material is polypropylene, measuring 6.5 inches in diameter for the Monitor 6 and 8 inches for its bigger brother, and DAS claim to have designed the magnetic circuit of the bass drivers to minimise distortion through flux modulation. An important point to note is that neither the Monitor 6 nor 8 is magnetically shielded and they cannot, therefore, be used anywhere near computer VDUs or TV sets (unless you happen to enjoy psychedelic pictures)!

The supplied literature gave no details of the internal crossovers at all, save to say that high‑quality components have been used. Both speakers offer a reasonable load to an amplifier, though; the Monitor 6 provides a minimum impedance of 7.2Ω (in a nominally 8Ω speaker), whereas the Monitor 8 is a little more taxing with a minimum of 3.2Ω at 15kHz. Impedance maxima appear to coincide with the crossover frequency, reaching almost 80Ω at around 2.5kHz in the Monitor 6 and 30Ω at 1.8kHz in the Monitor 8. Both speakers also exhibit significant bass driver resonance peaks at 75Hz, resulting in impedance peaks of 25Ω and 40Ω for the Monitor 6 and 8, respectively.

Rear‑panel connections comprise a single pair of shrouded binding posts, there being no provision for bi‑wiring or bi‑amping. The terminals incorporate integral 4mm sockets so will accept the usual banana plugs; bare wires can also be gripped, but spade terminals cannot be used. Apparently, this shrouding is an international safety requirement — don't get me started on the 'nanny state'!

In terms of power handling, the smaller Monitor 6 has a nominal sensitivity of 89dB SPL at 1 metre for 1W of power input with a peak level of 111dB. Recommended amplifier power is between 100 and 200W. DAS advise that its bigger sibling be driven from 125 to 250W amplifiers, producing peak SPLs of 116dB (nominal sensitivity is 89dB SPL at 1 metre for 1W). For the purposes of this review, I powered both DAS models with a chunky Bryston 4B amplifier (providing 250W per channel) and compared them with my own nearfield monitors, self‑powered (through Bryston powerpacs) PMC TB1s, as well as passive Dynaudio Acoustics BM5s. My main quality reference was a pair of PMC AB1 large two‑way transmission‑line monitor speakers.

As expected, the low‑frequency response is, essentially, omnidirectional, but the output becomes progressively more cardioid as the frequency rises, and the high‑frequency directivity of these speakers is very tightly controlled, as documented in an impressive set of polar response plots in the supplied spec sheet. The horizontal and vertical directivity is very nicely matched at all frequencies, although there is the inevitable vertical lobing through the crossover region as the two drive units interact destructively at certain angles (between 2 and 4kHz).

Both second‑ and third‑harmonic distortion figures are good for speakers in this price bracket, the Monitor 6 actually being the better of the two with mid‑ and high‑frequency distortion below 0.5 percent. Strangely, the Monitor 8 exhibits a prominent peak of second‑harmonic distortion between 300 and 900Hz, presumably caused by some form of break‑up mode in its larger bass driver. Below 200Hz the distortion figures for both speakers, inevitably, peak to around 3 percent, although the Monitor 8 has the edge here, performing marginally better in this area than its smaller relative.

Loudspeakers have improved significantly, over the last decade and these new DAS monitors demonstrate just how high the performance‑for‑money ratio is these days. Of the two, I came away with the confident impression that the diminutive Monitor 6 is the better‑balanced speaker, and by a clear margin. The Monitor 8, although technically possessing greater bass extension and power‑handling capability, sounded slightly more confused and seemed to have less ability to resolve fine detail in complex mixes, particularly in the all‑important middle part of the spectrum.

Both speakers demonstrated accurate and stable stereo imaging, with a good impression of depth on suitably recorded material, and relatively large sweet spots, presumably courtesy of the LQS waveguide design. Deliberately moving off‑axis revealed just how narrow the directivity is at high frequencies — at 45 degrees the Monitor 8s sounded about 6dB down above 2kHz or so, though the Monitor 6s don't reach that level of directivity until closer to 4kHz. This control of high‑frequency directivity will be a positive benefit in a lively control‑room acoustic and when used in the genuine nearfield, but endow the speaker with a rather lacklustre effect in a more absorbent acoustic, such as a domestic living room, or when listening from greater distances (simply because of the absence of high‑frequency energy in the room reflections).

The Monitors share a family sound quality, both having a mild suck‑out in the low mid (200‑600Hz) and a slight hump before the bass roll‑off begins, which is characteristic of a lot of reflex speakers. The metal tweeters also exhibit those familiar ripples in the top‑end response, although there are none of the nasty resonances that plague many metal‑dome tweeters. On both voice and music, these speakers produce a good standard of sound presentation, achieving the basic requirements of monitoring quality. They manage a fair degree of resolution in complex mixes and demonstrate pretty good neutrality and tonal accuracy, although both models presented female vocals, in particular, in a slightly recessed, 'darker colour' than my other references. Solid kick drums also took on a slightly 'velvety' softness — not an unpleasant sound, but not entirely accurate either!

The Monitor 6s, as I said earlier, seemed the better balanced of the two, being capable of slightly greater resolution in the mid bands, and with a faster and better controlled bass response. In terms of straight value for money, I have to say that both of these Spanish speakers are rather impressive, but especially the smaller model — a bonus of the strong pound and weak Euro! If you are considering the options for mid‑priced nearfield monitors you will have to add the Monitor 6s to your list. Good value for money, reliable performance, and Iroko wood panelling to boot!

Both of the DAS speakers are designed to be used close to a rear wall in order to supplement the bass response, although care must be taken to avoid obstructing the rear vent. In practice, that means leaving a gap of around four inches between the rear panel and the wall. Alternatively, the speakers can be located well away from walls without significant loss of bass performance. When placed close to a rear wall the frequency responses of the speakers are claimed to extend between 44Hz and 40kHz for the Monitor 6 and 38Hz to 33kHz for the larger Monitor 8. No limits are given on the spec sheet, but the frequency response plots suggest these figures are the ‑6dB points, and reasonably good control is maintained within ±2dB from 60Hz to 18kHz in both designs.

The manual also recommends placing the speakers on stands behind a mixing console rather than on the meterbridge, to minimise reflections from the control surface. In addition, since these monitors are not magnetically shielded, placing them on a meterbridge containing moving‑coil meters (VUs or PPMs) will result in some highly misleading meter readings...

When positioned away from a rear wall by more than about six feet, the handbook suggests that a 3dB bass boost should be applied to re‑equalise the low‑frequency response. However, neither speaker is equipped with such a facility and the handbook fails to provide any information regarding a suitable turnover frequency. In fact, I found both speakers worked acceptably in a mid‑room position, and although I experimented with a little gentle bass boost, I actually preferred both speakers without — particularly the Monitor 8, which I found a little overpowering when used close to a wall!

The strong pound works to our advantage with these Spanish passive nearfield monitors. Unique visual styling, well‑engineered acoustic design and good performance make them worthy of the 'monitoring reference' tag, albeit towards the bottom of the ladder.