Isn't it refreshing when a manufacturer cuts out the frills and just delivers something that's robust and quietly gets on with the job, leaving you free to focus on more important things? DAV electronics are one such company, and by basing products on standard project boxes they seem to be able to keep the prices down while delivering high‑quality electronics. 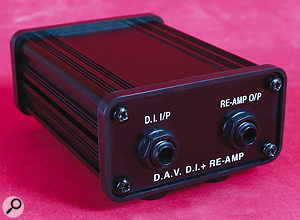 I've already been impressed by their mic preamps, but have recently been on the hunt for an affordable re‑amping box — so when I heard they'd launched a new one, I decided to try it out. Actually, I decided to try their combined re‑amp and DI box — although they do offer a dedicated re‑amp box for the same price. It's not impossible to send a line output from a DAW or mic preamp to a guitar amp without a dedicated re‑amping facility: a guitar pedal with a buffered bypass, or a passive DI in reverse, could be used, for example, but while they will feed the correct level to an amp, they don't present the same load as a guitar's or bass's pickups — and that's where a re‑amp box comes in.

The functionally named DAV DI + Re‑Amp includes a transformer in its re‑amp circuitry, so that it presents the right load to the amp. That, in turn, means less noise, and a slightly different response from the amp than when using the aforementioned devices. The transformer inevitably means that a dedicated re‑amp box like this costs more than a passive DI — so the price of this DAV device isn't bad, particularly considering the relatively small size of the market compared with that for DI boxes.

With typically understated styling, and presented in a robust, black aluminium project box, this device provides the re‑amp input and DI output, both of which are on standard balanced XLR connectors, on one end. On the other are quarter‑inch jack sockets for the DI's instrument input and the re‑amp output. Other than a set of feet screwed to the bottom of the device, that's it as far as the exterior goes — so it should come as no surprise that I found the device easy to use in practice. As a DI unit, it sounded nice, clean and transparent — which is what I've come to expect from DAV — and there was very little noise. On re‑amping duties, well, I hesitate to repeat myself... but it sounded clean and transparent, again with very little noise. Of course, because this box offers both DI and re‑amp facilities in the same box, you can use a guitar in combination with your favourite mic pre or outboard processor, and feed the resulting signal to your guitar amp — which potentially gives the guitarist access to a better quality of effect and processor. There's really very little else to say: it does what it does with no frills, and does it very well. Matt Houghton