This useful tool can help you achieve professional results on an amateur budget. 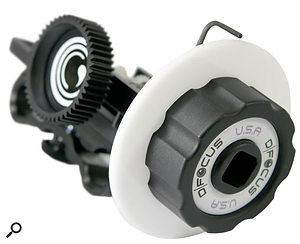 Although your camera's autofocus can be a time‑saver in certain situations, accurate and repeatable 'focus pulls' (where the focus of the shot is changed from one subject to another, such as from the background to the foreground) are best achieved using manual focus. However, it can be pretty fiddly to 'pull' focus using the ring, and can lead to camera shake. This is where a 'follow focus' can help.

A follow focus is a geared wheel that can be attached to a special mount or to industry‑standard 15mm- or 19mm‑diameter metal rods (also known as rails) fixed beneath the camera. The wheel is geared so that fine adjustments to focus can be made with large movements, and it allows adjustments to be made without touching the lens itself.

Some lenses have gear teeth for follow focus built in, but unfortunately these tend to cost many thousands of poundsdollars (the Carl Zeiss Compact Prime 2 series is one example). Most of us will need to attach some kind of gear ring to our built‑in lens or less expensive photographic lenses to use a follow focus.

All The Right Gear 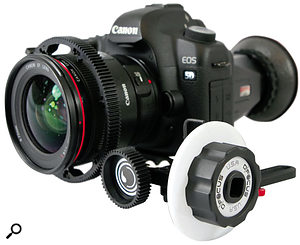 The US-made DFocus V3 can be fitted to 15mm rods or a special DFocus plate, sold separately. It may be bought on its own or with a number of gears for fitting to your lens or lenses. I had a single gear in my review kit. In order to deal with different diameters of lens, the gear has seven slots, into which you fit small plastic hex‑head screws of various lengths. The ring can then be tightened using a screw, and this screw also prevents the ring from turning a full 360 degrees in use. When using certain modern lenses, you might find this inability to turn the ring all the way round annoying. Keep the gear screwed down tightly and you should be OK, though!

Unfortunately, there are some lenses that don't want to play ball, and you'll find that one set of bolts will make the gear barely fit — even on its widest screw setting — while another set will make it too loose. If you use such a lens frequently, other manufacturers' gears may work, but the sad fact is that some lenses are just awkward. To use the DFocus, you'll need to ensure that any gear rings you use have its 0.8‑pitch gearing. 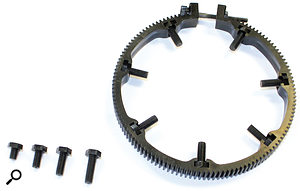 The gear rings use small bolts to adjust diameter. Most lenses work well, but some won't play ball, and changing all the bolts is very time consuming!

DFocus V3 has definitely improved from the previous iteration. The gearbox is now much slimmer, so positioning it against very short lenses is a little easier, and the overall system profile takes up less rail space.

Another notable area of improvement is the construction of the focus knob itself. Where the knob on the V2 is just that, the V3 has a nicer finish and a large white disc around it. The latter is perfect for marking focus points with a dry‑wipe pen. To track a subject walking from one end of the room to the other, for example, you'd rehearse the movement, marking the points on the wheel, and repeat it by simply moving the wheel smoothly between the marks. Cleverly, the 'reference pin' (the point you use to draw your marks against) is also a 5/64” hexagonal wrench for adjusting the gearbox.

The DFocus is solidly engineered, feels as nice as many such items costing twice the money (and nicer than some), yet doesn't break the bank in the same way as many competitors. I did find the gear rings themselves a bit fiddly, and switching them between lenses slightly long‑winded. There are some innovative competing gear‑rings out there, such as IndiSystem's new Snap gears, that attach with magnets, so there's no obstruction to the gearing and the ring can be turned infinitely. These are only available for set lens diameters, though, so it's really a case of horses for courses.

The main part of the DFocus sells for a very good price: £140$166 buys you the DFocus V3 itself and a single gear, which is very attractive in a marketplace where high‑end follow‑focus units can sell for £2000$2500. In short, it's a useful and relatively inexpensive addition to the aspiring film‑maker's gear list.

The latest version of the DFocus adds some nice new touches and is very well engineered for the price. The gear-rings leave a little to be desired, but the DFocus itself is a great low‑cost tool.