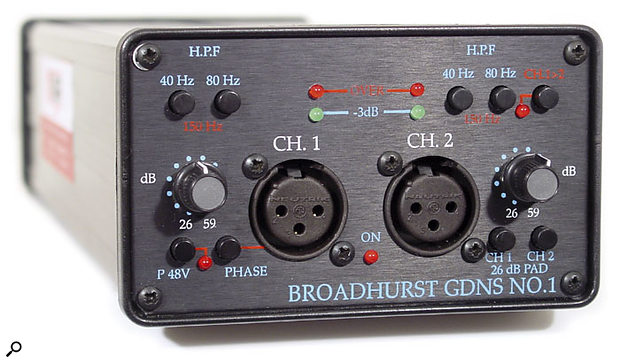 This preamp gives you vintage Decca design at a surprisingly low cost.

The Decca Recording Company acquired a phenomenal reputation over their long history in recorded music. The technical quality of their output was always to high standards, largely because of the calibre of their recording engineers, but also because the organisation tended to build or develop their own equipment when commercial alternatives were deemed unsatisfactory in some way. Don't forget, this was the company that developed the famous Decca Tree microphone arrangement that has been a stalwart of classical recording engineers around the world for half a century. The original Genex high-resolution digital recorders can also trace their pedigree to the Decca establishment, and the subject of this review — the Broadhurst Gardens Number One (BG1) microphone preamplifier — shares a similar lineage.

For those in the know, Broadhurst Gardens in West Hampstead was the location of Decca's London headquarters through the '60s and '70s, before their relocation to new premises on Belsize Road. Mick Hinton joined Decca in 1969 and worked in these facilities as a maintenance and design engineer, developing four-channel mic preamps that are apparently still in use by the former Decca engineers at Classic Sound.

Operating now as DAV Electronics (the DAV standing for Digital, Audio, Visual), Mick Hinton has developed an interesting and cost-effective line of high-quality audio products, all hand-built and designed to sound both 'big' and quiet, in the Decca tradition. The BG1 is said to be derived from Decca circuits dating back to the late '70s, benefiting from the careful development afforded to Decca's specialist electronic designs.

The BG1 preamp is accompanied in the DAV catalogue by a sister preamp, the imaginatively named Broadhurst Gardens Number Two. This is a four-channel rackmount version, providing very similar facilities but, strangely, it apparently costs more per channel in the UK than the two-channel original — so much for economies of scale! Also in the product line are the BG3 stereo mastering equaliser; the BG4 stereo limiter; and the BG5 channel strip.

DAV Electronics have already built a decent reputation for themselves, listing amongst their clients Whitfield Street Studios, The Decca Recording Company, Townhouse Studios, Metropolis Studios, Master Room and many other prestigious recording studios and production facilities.

The BG1 is packaged in an unusual way, for it is encased in a long slim extruded aluminium case measuring about 295mm in length and anodised with a matt black finish. The front and rear panels are approximately 110 x 70mm including their protruding edges. This mechanical design makes the BG1 ideal for simple location recording duties and several units can be stacked together to provide a lot of channels in a small space. 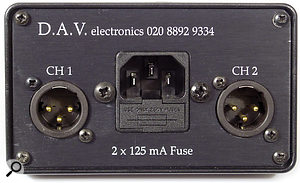 The rear panel carries only a pair of XLR sockets for the line-level outputs, separated by the standard IEC mains inlet with integral fuse holder containing dual 125mA fuses. The linear mains power supply circuitry and its toroidal transformer are mounted at the back of the case, well away from the low-level microphone circuitry, although the case is actually well balanced, rather than being rear heavy as I had expected.

The compact front panel carries the operational controls, which are all pretty self-explanatory, as well as the two XLR microphone input sockets. The panel markings are in white, red, and blue ink, but the red legends tend to become completely unreadable in low light conditions, and the blue ones aren't much better.

Each channel is equipped almost identically. Gain is determined for each channel by twelve-position rotary switches spanning the range 26-59dB. The unusually precise numbers are the result of incrementing the gain in 3dB steps over the 33dB range. The switched gain approach enables accurate resetting of gains — often a requirement in the classical recording field — and the small 3dB steps obviate the need for a fine trim control.

Level setting is aided by a pair of LEDs for each channel, the first labelled -3dB (green) and the second Over (red). Apparently, as standard the -3dB LED refers to an output level of +18dBu and Over means greater than +21dBu, at which point the preamp still boasts 8dB of headroom. This is seriously impressive and very unusual, especially in a product in this UK price bracket! The metering is designed to suit professional A-D converters, but can be customised to conform to other trigger levels, if required.

Each channel includes independent second-order (12dB/octave) high-pass filters operated via pairs of buttons located at the top of the panel. These provide turnovers at 40Hz or 80Hz, or 150Hz if they are pressed together. Below the gain knob for the first channel are two more buttons: the first activates 48V phantom power for both XLR sockets (and illuminates an associated red LED), while the second inverts the polarity of the first channel only.

Below the gain control of the second channel, two more buttons introduce 26dB pads into each channel input, enabling the input gain range to span 0dB to +33dB. The last control is yet another button, this time above the second channel's gain pot, and this routes the first channel's output through both rear-panel XLRs, disconnecting the second channel's output completely, but providing split outputs from channel one. Another red LED located between the two mic input XLRs illuminates when mains power is applied, there being no mains on/off switch.

I understand that the BG1 employs often-used (but now discontinued) Analog Devices integrated circuits at the front end of its circuitry, although they are clearly being employed in a sophisticated way, as the claimed performance figures make impressive reading. (A Burr-Brown chip is a available as a direct drop-in replacement for the original IC, with claimed improved performance, so there is no concern that this product has a limited life span.)

The specifications for the BG1 give the bandwidth as 10Hz-150kHz (±0.25dB), and distortion is specified as being below 0.01 percent in the worst case, and typically better than 0.001 percent at 1kHz for a +20dBu output level. The noise figure is given as less than 25µV, which equates to better than -110dB relative to a +20dBu output level (specified with a 10Hz-18kHz measurement bandwidth, 150Ω source impedance and 32dB of gain in use) — more than adequate for most purposes.

The BG1 In Action

The BG1 is a rather 'plain Jane' unit which certainly doesn't draw any attention to itself in the way that, say, an Avalon preamp does. Nevertheless, it seems to be able to perform on a similar level, even though it costs a fraction of the price of such elite units — we must assume that the money often spent on metalwork and aesthetic design has been ploughed into the electronics instead. The design of this preamp lends itself well to being sited close to the microphones on the recording floor, from where it can transmit its robust line-level signals all the way back to the control room.

Although style may be low down on the list of priorities, this case is immensely strong, so the preamp should be well up to handling the abuse of life on the road, serving as a very cost-effective location preamp. The only caveat to that is the protruding gain knobs, which will be the first thing to become damaged should the preamp be dropped!

The unit is almost trivial to set up and use, and although the two-LED metering is pretty basic, it is adequate for 'guestimating' the appropriate gain setting. After all, with such a huge amount of headroom, level setting is slightly less critical in this design than might otherwise have been the case. Essentially, as long as the green light only flickers on the loudest sections during rehearsals, you can be pretty confident that, even with the 3dB increase in level typical of a public or 'red-light' performance, there will still be another eight decibels of headroom available. 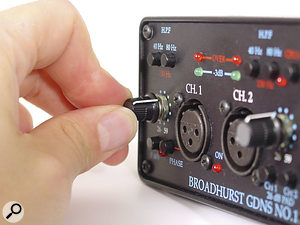 The BG1's stepped gain controls allow accurate and repeatable level setting over a 33dB range.Given the 3dB gain steps, I think a slightly larger metering window might have made the unit easier to use, providing a better sense of headroom and peak levels. For example, if the green LED came on 6dB below the red one, I think setting the optimum gain would be clearer — but this is a very small nitpicking whinge!

I found the 'channel one to both outputs' option quite useful when aligning input levels on a stereo mixer channel, and the high-pass filters are useful and effective, although I would have preferred lower turnovers. The four-channel BG2 unit incorporates high-pass filters with turnovers of 22Hz, 36Hz and 68Hz, which seem more practical to me. Also, switching the filters in or out of circuit on the BG1 can produce some significant DC thumps, so a little care is needed with monitoring levels when setting up to avoid costly speaker repairs! On the positive side, this does suggest a capacitor-free signal path, which is generally a good thing.

The overall sound of the BG1 is impressive. It provides that kind of 'larger than life' sound which I tend to associate with very high-quality mics and mic preamps. Even using a modestly priced mic like the CAD M179 on an electric guitar, or a pair of Sennheiser E604s as overheads on a drum kit, the BG1 managed to deliver a big-sounding recording that never felt strained, even when the levels were getting pretty hot.

With better-quality mics — my beloved Sennheiser MKH40s, for example — the combination sounded superb. Although my regular GML mic preamps still had a clear edge (most obvious in the bottom-end fullness), without a direct A/B comparison you'd be hard pushed to find fault. Compared to the Mackie XDR preamps in the VLZ Pro mixers, the BG1 was clearly superior, with a fuller, more involving sound and far greater headroom and openness — which I think is phenomenal at this price point!

Clearly, the BG1 is intended primarily for use with a stereo mic pair, and for the kind of classical, choral and other acoustic recording work I tend to do it met my needs admirably. Used in conjunction with my Genex digital multitrack recorded (a match made in Decca!), it proved the perfect partner, both in terms of recorded quality and output level. This last point is an important one, because the output from the BG1 is seriously big by the time you've persuaded both the green and red lights to flicker! Don't even think about partnering this preamp with a domestic DAT or Minidisc recorder, or any semi-professional -10dBV recorder — even a lot of so-called professional equipment will struggle to deal with transient peaks which reach above +20dBu.

I have to say I was seriously impressed with the BG1, and at this price it is impossible to level any credible criticism at all, although I'd like to try out the rackmounting four-channel BG2 unit before committing my finances. This is a no-frills box that does the job superbly well, with a clean and neutral sound character that has much in common with units costing ten times the price. Definitely one to check out if its physical size and design considerations fit in with your way of working.

A simple two-channel mic preamp with a Decca pedigree. It includes all the features expected of it and manages to produce a full, large-scale sound quality that belies its surprisingly modest price.