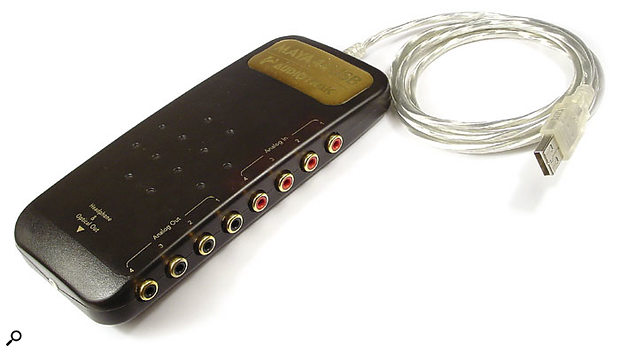 Laptop users on a budget can't help but be tempted by the Audiotrak Maya 44 USB's promise of four-channel analogue I/O, low-latency ASIO drivers and multi-client support for under £100. Is it really as good as it sounds?

If you've been looking for something to get audio in and out of a laptop computer, or you don't fancy messing about with PCI cards, you can't have helped noticing that the cheaper end of the market is dominated by USB devices, many of which offer tempting specifications for not much money. Now Audiotrak, the 'consumer' division of ESI, have come up with another, in the form of the Maya 44 USB, which joins the surround sound-orientated Maya EX and Maya EX7 in their growing USB range. Priced at £100, it comes with four analogue ins and outs, plus a combined headphone socket and optical digital output. OK, so it may not boast 24-bit converters, but Audiotrak have provided ASIO 2 drivers courtesy of German USB-meisters Propagamma, which alone cost 60 Euros in their commercial form. All this comes in a lightweight, USB-powered package little larger than a Cornish pasty, with eight phono sockets in a neat row down one side, and LED activity indicators visible through the semi-transparent casing.

Installation on Windows XP is currently not quite as straightforward as it could be. The first steps involve plugging in the device, waiting for Windows to finish loading its generic USB drivers, and installing Propagamma's ASIO driver — a simple enough process consisting of clicking 'yes' a few times. After a reboot, Windows again installs the generic drivers, which then require manually updating to Audiotrak's specific ones via a trip to the Device Manager applet in Control Panel. Anyone who's had to manually update drivers before shouldn't encounter any nasty surprises here, and the manual does provide a fairly good walk-through for the less confident. When the process is complete, the Maya should be listed by name among the USB controllers in Device Manager, and as 'AudioDevice on USB Bus' in the Sound, Video, and Game Controllers section.

The rather convoluted installation procedure was not the only acknowledged shortcoming with the supplied drivers: though the situation may have changed by the time you read this, at the time of writing only ASIO applications could take advantage of the Maya 44 USB's four-in, four-out capability, as only a stereo pair is available with the standard WDM interface. Since an ever-increasing number of audio programs now support ASIO this shouldn't be much of a problem, but for those who resist the lure of cutting-edge software it's something to bear in mind.

The most troublesome issues I experienced with the Maya 44 USB were specific to my IBM Thinkpad T30 laptop, and seemed to be related to the internal/external sync settings for the ASIO driver. In the absence of a digital input this determines whether the sample rate clock is generated by the USB device itself or the host computer, and according to Propagamma's web site, external sync is the "recommended option and necessary for recording", though internal sync can be used for more accurate clocking on playback.

The first problem involved characteristic 5-15 sample glitches that would mar audio recorded when the ASIO drivers were set to external sync, and a quick tinker with the demo of Sonic Foundry's Vegas 4.0 confirmed this problem was not confined to Cubase SX. On the other hand, recordings made with internal sync were fine, but this mode came with its own bugbear; namely, the output signal's tendency to progressively degrade into a swathe of crackles after varying intervals of playback, necessitating either resetting the Maya from Cubase's Device Setup dialogue, or reloading the ASIO drivers.

To cut a long, dull story short, a protracted troubleshooting session failed to uncover the source of either problem, and nor was either solved by plugging the Maya into a self-powered Belkin PCMCIA USB 2 adaptor instead of the laptop's integrated USB ports. One particular hitch akin to the output degradation issue is described in Propagamma's support FAQ as usually being caused by processor speed-scaling functions, USB hubs, or "a silicon issue of hardware incompatibility that only effects the output path". Eliminating the first two possible culprits left only the obscure notion of a 'silicon issue', reinforced by the fact that my desktop PC exhibited neither problem. The workaround, of course, was to record using internal sync, and then switch to external for interruption-free mixing, or to use Cakewalk's Sonar 2, which was trouble-free throughout in both ASIO and WDM modes. 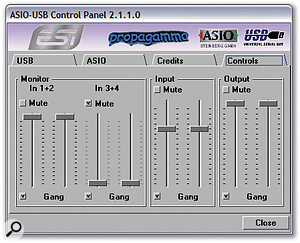 The Maya's four-channel I/O capabilities are only available with the ASIO driver.The ASIO control panel contains the latency settings and a rather simple mixer (see screen shot elsewhere in this review), with direct monitoring controls and a single stereo fader for both pairs of inputs and outputs. The Propagamma driver provides for a minimum output latency of about 4ms (197 samples) at 44.1kHz, with an additional 3ms for the input if you were planning to monitor via software. This 'high speed' setting is joined by four others — 'rapid', 'fast', 'normal', and 'relaxed' — which work progressively up to an output latency of 123ms for maximum dependability at the expense of snappy performance.

When I initially tried out the 4ms setting on a moderately complex, in-progress song with Cubase SX Rewired to Reason, the results were not overly encouraging. Before I had so much as pressed Play the CPU meter leapt above the 90 percent mark, where it remained for several long minutes whilst I attempted to navigate a jerky mouse around the screen. On songs that used relatively little processing power I didn't have to fight for control of my computer, though it was obviously fighting a losing battle trying to fill the buffer, judging by the number of clicks and pops emerging from the output. The 'rapid' setting, with an output latency of 9ms, faired much better, and although the odd click could still occasionally be heard, I found it quite workable for general soft-synth twiddling and the like.

To get some idea of the relative ASIO performance, I played back a few test songs first on my Echo Indigo PCMCIA card and then on the Maya, with no inputs activated on the latter, and with roughly comparable buffer sizes (256 and 440 samples respectively). In each case the Maya exhibited about 10-20 percent higher CPU usage than the Indigo, and also some clicks and dropouts on occasion. At higher latency settings — 512 samples on the Indigo and 787 on the Maya — it was a more even contest, though the Echo device still held a clear edge in terms of processor efficiency. 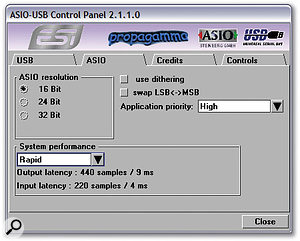 The Propagamma ASIO driver provides five latency settings, from 'high speed' to 'relaxed'.I think these rough comparisons do support Audiotrak and Propagamma's hardware recommendations, which suggest a minimum 500MHz processor for ordinary (read 'conservative') use and 1.2GHz for low-latency performance on Windows XP. Propagamma also note that Intel Celeron processors seem to struggle more with low-latency USB audio, and this observation seemed borne out by my tests. The three fastest latency settings were unusable on my 900MHz Celeron desktop machine, which would only work glitch-free at over 40ms — hardly practical for use with soft synths, let alone real-time monitoring of an input signal. Ultimately, this means that although latency performance is always something of a trade-off with the number of plug-ins you get to use, this will be felt fairly sharply with the Maya 44 USB.

Reservations on latency aside, the Maya proved well able to make the most the limited USB 1.1 bandwidth, and recording both stereo inputs whilst monitoring the two output pairs was handled with ease. It's also worth noting that the ASIO drivers are fully multi-client, meaning two applications can share the same stereo output. Alternately, since the headphone socket monitors the sum of both analogue output pairs, you can assign one program to outputs 1 and 2 and another to 3 and 4 and hear both through your cans. I'd appreciate this kind of flexibility on my Echo Layla24.

Given the lack of 24-bit converters, I don't suspect many musicians will choose the Maya 44 USB on account of its sound quality, though this was quite reasonable and a definite improvement on my laptop's integrated audio. Tests with Rightmark's Audio Analyser gave a residual noise reading of 84.8dBV which, though certainly not stellar, should be good enough for most non-critical applications. I was also able to confirm that the optical output had no problems in producing bit-for-bit digital transfers, provided the buffer size was raised to a safe level.

The Maya 44 USB features four-channel analogue I/O, as well as a stereo optical digital output.In the course of testing the Maya 44 USB on two different PCs I did stumble across a few problems, most of which were difficult to pin down to any specific cause (see the Glitch Stories box for details of the two main ones). These included a blue screen of death on waking my laptop from standby (with an error caused by ESI_usba.sys), and some hotplug issues where the ASIO drivers wouldn't recognise the hardware. Given the number of permutations involved, it's difficult to tell whether the drivers or the hardware was to blame, but as this review was conducted using Audiotrak's initial driver release I rather suspect the former.

Whilst the Maya 44 USB won't win any prizes for sound quality, multiple analogue in/out for laptop computers doesn't come much cheaper than this. The promise of very low-latency performance is also enticing, and although I can't vouch for the lowest 4 millisecond setting, those with fast PCs should find the Propagamma ASIO drivers provide pretty decent performance at VSTi-friendly speeds. Ultimately, although this reviewer remains a mite unconvinced that the USB format offers the reliability of PCI or PCMCIA, the Maya 44 USB provides a versatile feature set in a handy, lightweight package which won't burden either the travel bag or the bank balance.

Paired with a speedy laptop or desktop PC, the Maya 44 USB offers reasonable low-latency performance and workmanlike sound quality. If you need multiple analogue I/O on a laptop, and on a budget, it offers good value for money.