Audio Technica have put two different capsules into the same mic, giving you a choice of different sounds for different occasions.

Photo: Mark EwingThe AE2500 is a chubby little microphone which, unusually, contains both a dynamic and an electret capsule, mounted side by side. The idea is that, because each of these capsules inherently has a different sound character, by offering both in the same package the user can blend their qualities as required to help capture (or create) the desired kick-drum sound.

The AE2500 is a fairly large microphone measuring 165 x 55mm and weighing 390g. The metal body has an anthracite grey finish, with an unusually long 'connector stalk' at the bottom, and a very large dual-layer grille which extends over more than half the total length of the mic. This is an 'end-fire' cardioid microphone, meaning that it is pointed directly at the sound source, rather than sitting upright in front of it as a 'side-fire' mic would be positioned. It is supported from a mic stand using the supplied AT8471 isolation clamp, which slides around the connector stalk and is secured by a screw clamp. This collar is made of a pliable rubber compound to provide some degree of vibration isolation. The standmounting thread is the American standard 5/8-inch, but a European 3/8-inch adaptor is also supplied.

The output XLR connector is mounted in the stalk, and is a five-pin XLR. A five-metre cable is provided with the microphone, terminated in a five-pin XLR at the mic end and a pair of three-pin XLRs at the stage-box end — both capsules being phased identically, of course. These are clearly marked with both colour-coded sleeves and labels (red for the dynamic and blue for the electret). The electret capsule requires standard phantom power to operate (drawing 3mA), but will accept anything between 11V and 52V DC.

On the body of the mic, a pair of recessed switches are provided to pre-condition the signal fed to the internal electret capsule preamp. One applies a 10dB pad, and the other introduces an 80Hz 12dB/octave high-pass filter — the latter being particularly useful given the extended LF response of the electret, which remains flat to below 20Hz in normal operation.

Unscrewing the grille reveals the two capsule elements mounted side by side with their diaphragms on the same plane. This maintains an accurate phase relationship between the two capsules — something that is quite hard to do with separate microphones. The electret element has a diameter of about 16mm, while the moving-coil capsule is 28mm across. Both have side entry ports to enable the required cardioid polar response. The metal grille case has a thin layer of open-cell foam inserted at the end face to provide some additional protection against turbulent air, in addition to the coarse and fine wire-mesh grilles.

The information sheet supplied with the mic includes separate frequency and polar plots for each element. The electret capsule is remarkably flat from below 20Hz to over 5kHz, after which there is small peak (about 4dB at 9kHz), followed by a fairly steep roll-off reaching -3dB by 15kHz and at least -15dB by 20kHz. The moving-coil element also has a relatively flat frequency response, but exhibits two mild peaks centred at 120Hz and 6kHz — the former a very smooth and broad 3dB, the latter a rather more Alpine 5dB before the response plummets beyond -6dB at 10kHz and -30dB at 18kHz. Both capsules share similarly accurate polar responses, although the plots hint at a small disturbance in the electret's high-frequency response, possibly caused by its proximity to the moving-coil capsule. 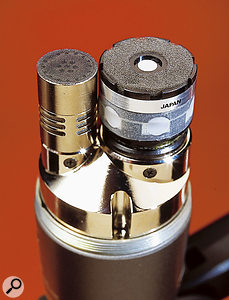 Here you can see the two capsules at the heart of the AE2500 — an electret on the left and a dynamic on the right.Photo: Mark EwingMost purpose-designed kick-drum mics have frequency responses that resemble the Himalayas: a peak centred at 80Hz to provide the weight of the kick, plus higher peaks extending between 2kHz and 5kHz to emphasise the click of the beater, and a big suck-out through the mid-band — the AKG D112, the Beyerdynamic Opus 65, and the Sennheiser E602 all exhibit these characteristics, for example. The advantage of such built-in EQ is that the mic delivers a good rock-oriented kick drum sound without the user having to put in any effort with the desk equaliser. However, it also means that every kick drum tends to sound the same — the mic EQ tends to swamp the drum's own sound character.

While the moving-coil element of the AE2500 tends to share a similar but rather more restrained mountainous profile, the electret capsule is essentially flat. This means that you can have the best of both worlds: a ready-made kick drum sound heavy on the thump and click from the dynamic capsule, combined with a more neutral rendition of the drum itself, showing off the qualities of the drum shell resonances from the electret, for example.

One other interesting point that emerged from comparing the published polar responses of the three common kick drum mics mentioned above, is that two of the three tend to become either omnidirectional or bi-polar (figure-of-eight) at low frequencies — which could cause problems with unwanted LF spill in stage applications. Only the AKG and Audio Technica mics maintain a reasonably well-controlled response at low frequencies.

In terms of sensitivity, the electret is about 3dB more sensitive than the moving-coil element, with ratings of 2.8mV/Pa and 1.9mV/Pa respectively. A maximum SPL is not given for the dynamic capsule, but the electret can withstand 148dB for one percent distortion, or 158dB if the pad is switched in. The electret mic isn't the quietest in the world, with a self noise of around 24dBSPL (A weighted), but that hardly matters in the intended application.

It may initially seem wasteful of desk channels and snake circuits to have to allocate two to the kick-drum mic, but the extra flexibility that this approach provides can be extremely useful — particularly for anyone working with a rock group one day, a jazz trio the next, and an orchestral percussion section the day after! The sound of the kick drum can be changed dramatically by varying the balance between the capsules by relatively small amounts, or by processing them separately — compressing the electret to bring out more of the shell sound and equalising the dynamic to emphasise the beater, for example. The options are almost limitless, and I was really surprised by just how much controllability this arrangement provides. By recording the two microphone outputs separately, you also have much more scope available during post-production to optimise the kick-drum sound.

However, should you only have room for a single kick-drum signal, either element can be used on its own without problems. The dynamic sounds much like any other kick-drum mic, although not quite as peaky, and the electret sounds much like any other general-purpose condenser mic — neutral and with wide bandwidth. Choose whichever element provides the closest core sound to that required.

I have to say that, although I recognise the convenience of the pre-EQ'd kick-drum mics offered by most of the big-name mic manufacturers, I have often found myself using something more neutral instead — particularly when recording jazz bands rather than stereotypical rock groups. The Electrovoice RE20 was a particular favourite, in fact, partly because of its comparatively flat frequency response.

To me, the AE2500 provides the best of both worlds — an equalised dynamic mic character similar to the AKG, Sennheiser and Beyerdynamic offerings, combined with a flatter, more neutral output providing the natural tonality required in acoustic music. Best of all is the ability to mix and match these characters to obtain the perfect blend, without fear of phase problems. However, the mic is also roughly twice the price of its simpler peers — not surprising given that it has twice as much inside, I suppose — so, for many, the additional flexibility of the AE2500 may be outweighed by the higher purchase price. For anyone working with a wide variety of different musical genres, the AE2500 provides an unmatched level of flexibility and practical convenience, and I thoroughly recommend trying one out for yourself. You will be impressed — I certainly was.

An innovative dual-element kick-drum mic which lets you combine the best attributes of moving-coil and condenser mic sounds.