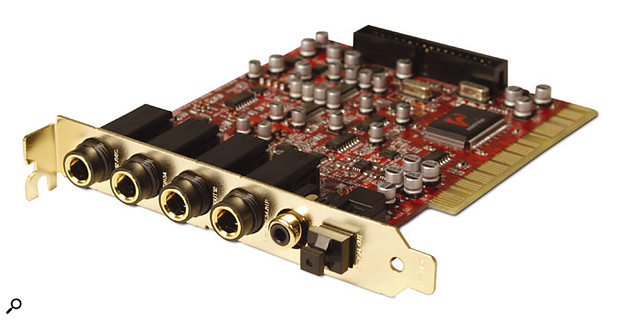 If you need four analogue inputs and outputs, Audiotrak's 24-bit/96kHz-capable soundcard is about the most affordable option on the market.

Although Audiotrak are the consumer division of ESI Pro (formerly Egosys), some of their products are definitely of interest to the more serious musician. We looked at their Prodigy soundcard in SOS March 2003 and the Maya 44 USB audio interface in SOS December 2003. Despite its similar name, the Maya 44 MkII is a PCI soundcard rather than a USB device, and offers four analogue inputs and outputs, plus both Toslink optical and co-axial digital outputs, but no digital inputs.

While the various other models in the Audiotrak range all sport 3.5mm mini-jack or phono sockets for their analogue I/O, the Maya 44 MkII is unique in fitting the more robust quarter-inch jack sockets. The down side is that in order to squeeze them onto the backplate alongside the S/PDIF Toslink optical and co-axial phono digital outputs, four stereo sockets are used, wired as Line Inputs 1/2, Line Inputs 3/4, Line Outputs 1/2 and Line Outputs 3/4, so you may need to buy some Y-cables with a stereo jack on one end and twin mono plugs on the other (these are not supplied).

Compared with the original Maya 44, the Mk II provides 24-bit/96kHz converters, an internal mixer, and a more advanced Console utility. As mentioned, there are still no digital inputs, but an expansion socket on the MkII circuit board now lets you add them courtesy of the optional MI/ODI/O assembly — a second circuit board and backplate housing an optical digital input, plus a breakout cable comprising S/PDIF co-axial in and out and MIDI In and Out, which retails at £50 including VAT.

The bundled CD-ROM contained drivers for the entire Audiotrak and ESI Pro range, but as usual I visited the web site and was able to download much more recent drivers for the Maya 44 MkII, which are suitable for Windows 98SE, Me, 2000 and XP. After I bolted the soundcard into my PC I had no difficulties installing these drivers, and was soon back at the desktop with a new Maya 44 Console icon in my System Tray. 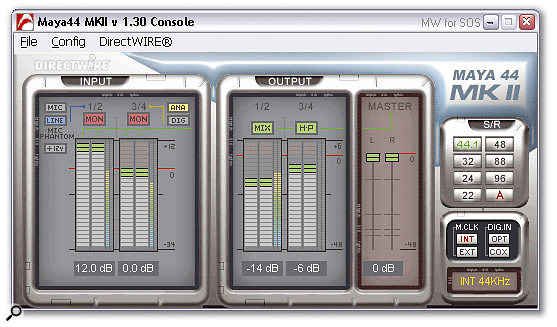 The Maya 44 MkII Console utility is straightforward and easy to use, yet provides a surprisingly versatile set of options.

The attractive Console utility is divided into three main areas: Input, Output and Digital. The Input panel contains four faders for altering the input gains between -34.5dB and +12dB, and these have peak-reading meters alongside to monitor incoming levels. ASIO Direct Monitoring is activated for each input pair via a Mon button above the faders, while input pair 1/2 can be switched between stereo Line or mono Mic use by selecting the appropriately named button. In Mic mode there is also optional +12 Volt phantom power, while if you have the optional MI/ODI/O module, line inputs 3/4 can be switched between analogue and digital duties.

The Output panel also contains identical faders and meters for the four output channels, but there's an additional button above each output pair. Outputs 1 and 2's Mix button uses the Maya's internal digital mixer to send a combined output from all four channels to output sockets 1/2 — this is handy if, for instance, you're running Cubase and Gigastudio simultaneously but don't have an external analogue mixer. Above outputs 3/4 the HP button switches in a headphone output stage and automatically connects the signal from outputs 1/2 to it, reducing you to two output channels — you can hear a slight increase in background noise level as this happens, and the output impedance drops significantly to drive lower-impedance phones from 600Ω right down to 32Ω at levels up to 125mW. A pair of Master faders controls the final output levels from all four channels.

The right-hand Console panel provides control over sample rate, either manually or automatically depending on what file format you're playing back, and displays its current value at the bottom, while the other buttons for Internal/External and Optical/Co-axial digital clock source only apply if you've installed the optional MI/ODI/O module. Both digital outputs carry the same signal, which is identical to that of analogue outputs 3/4.

Finally, there are various menu options to set such things as latency between 2048 and 48 samples and to launch the ESI Direct Wire panel supporting MME, WDM, ASIO and GSIF driver formats. As I explained in some detail in my review of their Wami Rack 192X (www.soundonsound.com/sos/oct02/articles/esipro.asp), this uses the ESI multi-client driver capability to digitally pipe the output of one driver to the input of another, so you could (for instance) record Gigastudio into Sonar or Cubase, Nuendo into Wavelab, and so on.

Although Audiotrak's web site insists that the Maya 44 Mk II is 'the best recording soundcard in the world', I think we can assume that at £129 this is highly unlikely. Auditioning with a wide range of different music material, the Maya 44 sounded clean and clear, but was easily outmatched by my benchmark Echo Mia, which allowed me to hear further into the mix and had more precise stereo imaging.

Rightmark Audio Analyser tests showed a flat frequency response -0.5dB down at 26kHz and a slightly high 22Hz with a 96kHz sample rate, and a combined dynamic range for its A-D and D-A converters of 91dBA running at 24-bit/44.1kHz — in line with the published spec, but frankly outclassed by many other soundcards at a similar price. Nevertheless, in my PC the Maya 44 MkII succeeded in running at its lowest ASIO latency of just 48 samples (for a latency of 1ms) without glitching, and its GSIF drivers performed without a hitch with Gigastudio.

Where there are lots of budget 24-bit/96kHz soundcards offering two analogue inputs and outputs, if you need four of each the options narrow considerably. One obvious alternative to the Maya 44 is M Audio's Delta 44 at a rather more expensive £150 on the street; although this does include a smart breakout box and better audio performance, it lacks any digital I/O. Most others are even more expensive, like Marian's Marc 4 MIDI with an additional two MIDI Ins and Outs at £195. Against these the Maya 44 MkII fares quite well on price, although its audio quality rather lags behind them both.

However, if you want the added digital inputs and MIDI I/O of the optional MI/ODI/O module, the Maya 44 MkII's combined price is £179, and here you're entering the territory of M Audio's Delta 66 (which costs about £180, and is like the 44 with digital I/O but no MIDI), Terratec's DMX 6Fire at around £165 with a versatile set of input options and six analogue outputs, ESI Pro's own Waveterminal 192M with a four-in/eight-out-plus-digital-and-MIDI format but disappointing crosstalk figures, now selling at around £180, and of course Creative's Audigy 2 ZS, which at around £165 provides six inputs and eight outputs at 24-bit/96kHz, plus all its digital trimmings.

With stereo-I/O products like M Audio's now elderly Audiophile 2496 and Terratec's EWX 24/96 both offering 10dB more dynamic range for about £120, and Emu's 1212M offering superb audio performance, DSP effects and versatile digital I/O at just £149, you might expect the Maya 44 MkII to have a hard life. However, at £129 it's probably the cheapest four-in/four-out PCI soundcard on the market, and should therefore manage to carve out a niche.

Despite an below-average audio performance by today's standards, the Maya 44 MkII is nevertheless the cheapest soundcard I know of providing four analogue inputs and outputs with a mic option, and should therefore appeal to those with a strict budget.