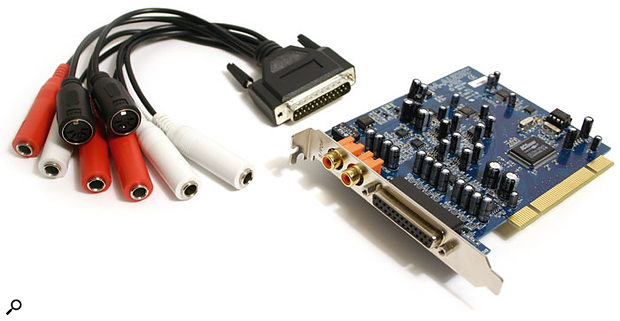 M-Audio's original Audiophile 2496 has proved incredibly popular in the four years since I reviewed it in SOS April 2001. Its secret was to provide the basic features many musicians needed — two high-quality analogue inputs and outputs, plus co-axial S/PDIF and MIDI inputs and outputs — at a bargain £179. The Audiophile 2496 is still going strong with its 24-bit/96kHz-capable converters, and is now even more of a bargain at its new price of £69.99. Meanwhile, it's been joined by the Audiophile 192, which meets the same basic needs, but in an altogether more sophisticated way.

As its name suggests, the Audiophile 192's converters support sample rates up to 192kHz, and there are further improvements on offer, such as balanced I/O throughout on quarter-inch jack sockets rather than the 2496's unbalanced phono sockets, an extra pair of analogue outputs for monitoring purposes, and an improved overall dynamic range of 109dBA compared with the 100dBA of the 2496. At £119 it also seems good value for money.

The PCI card itself supports both 3.3-Volt and 5-Volt switching to give it the widest compatibility, and uses AKM's AKM 5385A analogue-to-digital converters and AKM 4358 D-As — in both cases, the same as are used on ESI's Julia, reviewed in SOS January 2005. The breakout cable emerges from a 25-way connector rather than the nine-pin version used by the 2496, and provides six quarter-inch jack sockets for In L & R, Main Out L & R, and Mon Out L & R, plus a pair of DIN sockets for MIDI In and Out, all on short flying leads; the co-axial S/PDIF in and out are on the PCI backplate.

The software bundle is M-Audio's popular Maximum Audio Tools package, containing limited editions of Propellerhead's Reason and Ableton's Live, both offering special upgrade offers to the full versions, plus a demo CD with 433MB of Acid ised WAV Pro Sessions loops. The drivers on the CD-ROM were already the most recent versions, and since the same ones are used by the entire Delta range they are extremely mature and bug-free — a very handy feature for a new soundcard! They run under Windows XP with SP1 or later, Windows 2000 with SP4, Mac OS Jaguar 10.2.8 or later, or Panther 10.3.4, covering WDM, ASIO 2, GSIF 2 and Mac Core Audio formats, and also support up to four simultaneous Delta devices so you can add more I/O later on. M-Audio also have beta versions of their 64-bit PC drivers available for download, fully compatible with the forthcoming Windows XP 64-bit Edition.

Like many other modern driver installers, this one is run before the interface is installed, and to avoid conflicts it completely removes all traces of any previous drivers before proceeding — once you power down and fit your new Audiophile 192 card into its PCI slot, every file is already in place waiting for the operating system to detect the new hardware and finish installing the drivers.

Within audio applications the Audiophile 192 offers Analog 1/2 In and Out and S/PDIF 1/2 In and Out as options, and since on this model there's an additional dedicated Analog Output for monitoring, the familiar M-Audio Delta Control Panel is even easier to use than normal. I've described the basic Control Panel functions on many occasions now, so I'll restrict myself here to pointing out changes. The Monitor Mixer page takes the stereo analogue and digital playback outputs, plus the 'zero'-latency-monitored contributions from the analogue and digital inputs, and lets you mix them together to emerge from the hardware monitor outputs.

However, the mixer level, mute and solo controls all affect the main outputs as well; for instance, muting the WavOut 1/2 outputs in the monitor mix output also kills the main WavOut 1/2 output signal. This coupling could be useful if you want global control over two pairs of speakers in different rooms, or over speakers and headphones, but for anyone using the main output for control-room speakers and the monitor output to set up a separate headphone monitoring mix, it might prove frustrating.

On the Patchbay/Router page, only the S/PDIF output provides source options (the other outputs are hard-wired), and you can choose from WavOut, S/PDIF In, S/PDIF L/R Reverse, or H/W In (for zero-latency monitoring). The Hardware page contains numerous clock, sample-rate and buffer-size settings, and the only new parameters I spotted were a pair of tick boxes for individual Input channel phase reversal. Finally, the S/PDIF page provides flag settings for both Consumer and Professional formats, as well as a handy choice of sending the hardware input or software playback to the monitor mixer when recording via the S/PDIF input.

I performed my usual double-blind listening tests on the Audiophile 192, Echo Mia and Echo 1820M soundcards, matching their output levels to within 0.1dB, and then noting down any audible differences with a wide range of dance, rock, jazz, classical and vocal music. As always, the differences were far more subtle than those between different speakers, but I repeated the tests five times to confirm my findings.

The Emu just pipped the others to the post with its noticeably more focused sound, but this time the Audiophile 192 was extremely close behind with a very warm and natural sound, while my Echo Mia sounded distinctly harsh by comparison every time, and could be picked out of the three quite easily. Since the Echo Mia has identical AK4528 converters to the older Audiophile 2496, I can safely say that the new Audiophile 192 should provide the same obvious improvements in subjective audio quality over its predecessor. 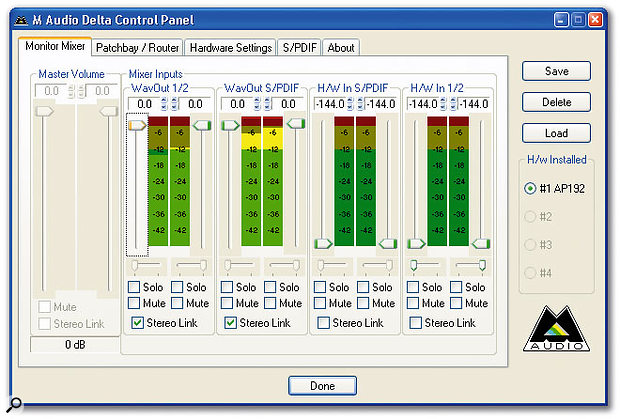 On this latest member of the Delta soundcard family, the Monitor Mixer has its own dedicated stereo analogue output, although its controls also affect the main outputs (see main text).

The Delta drivers are now so mature that I didn't expect any problems, and I didn't get any. The Direct Sound drivers managed an average 35ms Play Ahead setting in NI's Pro 53, although few musicians need to use these nowadays. Far more important to most is that I managed to drop the ASIO buffer size to its lowest 64-sample setting for a latency of just 1.5ms with both Cubase SX3 and Sonar 4, although as with all drivers, dropping this low did result in a significantly higher CPU overhead. For anyone needing to use the WDM drivers, these also provided excellent performance, matching the ASIO result of glitch-free latency all the way down to 1.5ms, while the GSIF 2.0 drivers worked perfectly first time with Gigastudio 3.

The drivers have full multi-client capability, which is extremely useful with a stereo card. I was able to simultaneously run Cubase SX3 with the ASIO drivers, Wavelab 5 with the MME-WDM ones, and Gigastudio with the GSIF ones, with no problems.

With Rightmark's Audio Analyser, the frequency-response plot displayed the same inaudible ±0.025dB ripples from 1kHz upwards as ESI's Julia, which confirms that they are a characteristic of the converter filtering. The response was 0.3dB down at 20.3kHz and 9Hz, with the top end extending to 44kHz with a 96kHz sample rate, and 62kHz with a 192kHz sample rate, figures which are all once again identical to those of the Julia. THD was a very low 0.0004 percent, again matching the Julia precisely, while the dynamic range stayed remarkably constant with sample rate, measuring an excellent 110dBA — this time beating the Julia by 4dB.

Overall the Audiophile 192 is a very capable and reliable performer with excellent audio quality for the price, and it goes significantly beyond its 2496 predecessor in all departments. However, I can't help feeling that after fitting four D-A converters to feed the main and monitor stereo outputs, M-Audio's designers have missed a trick in not letting you access all four from software, for true two-in/four-out analogue I/O — with the additional stereo digital I/O, this would give the 192 a distinct edge over similarly priced competitors.

Talking of competition, you've probably already noticed from my previous comments that ESI's Julia provides a very similar audio spec, but it also offers a choice of +4dBu balanced or -10dBV unbalanced input/output options via its rotatable pod, an additional optical digital output, and is £10 cheaper. However, the Audiophile 192 has a measurably better dynamic range, already has GSIF 2.0 drivers for tighter MIDI timing when used with Gigastudio 3, and incorporates that extra pair of monitor outputs.

Another 192kHz-capable competitor with balanced analogue I/O is Emu's 1212M. For an additional £30, this offers 7dB greater dynamic range than the Audiophile 192 and additional ADAT and Firewire ports plus a more comprehensive mixer and a set of DSP effects. On the other hand, its drivers are perhaps not as mature as M-Audio's, and it doesn't offer any GSIF drivers at all, while the Audiophile 192 has a far more extended frequency response at higher sample rates, and those extra monitor outputs.

With so many competing models available at around this price, it's becoming increasingly difficult to choose, but if you want a PCI soundcard that supports 192kHz sample rates and offers balanced analogue I/O, and you definitely want GSIF driver support, M-Audio's Audiophile 192 offers the best audio performance I've measured to date in this price range.

M-Audio's Audiophile 192 provides great sound quality for the price, as well as stable and versatile drivers, but would offer even better value for money if its monitor outputs were more flexible.