The Operating Table • Cut'n It Up 3 • Drums On Demand Vol 3: Upbeat & Aggressive By John Walden 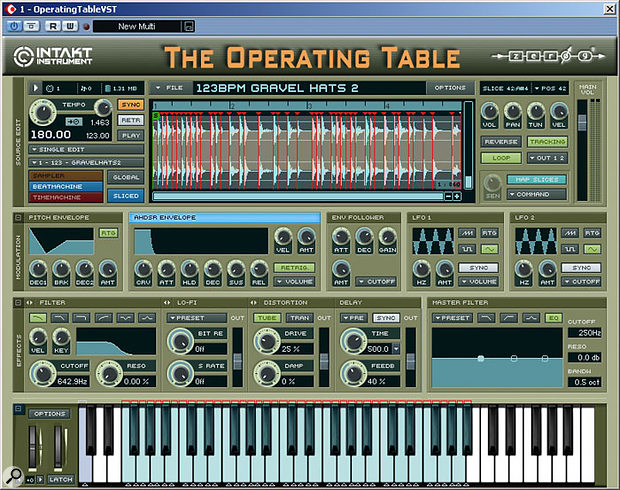 There is no doubt that many sample developers are now becoming very keen on the 'library plus software front end' approach for delivering their library products. Zero G's The Operating Table is another example, and is supplied with a version of Native Instruments Intakt as the playback engine. I looked at a number of these types of library from both Zero G and East West in SOS February 2005. This review covered the details of the specific version of Intakt, so I'll not dwell too much on the front end here. That said, two features are worth restating. Firstly, Intakt offers three modes of sample playback; Sampler, Beat Machine, and Time Machine. The first is self-explanatory, while the last provides Acid-like time-stretching. In contrast, the Beat Machine allows loops to be sliced and diced Recycle-style. Secondly, the samples have to be used with the supplied version or the full version of Intakt — they cannot be opened for use in an alternative sampler application. If you are happy with Intakt as a playback device (and even in the cut-down version supplied here, it is still fully featured) — then this is obviously not a problem. Devotees of other samplers might be less enthusiastic about this restriction.

Installation takes just a few minutes, although the final stage of this process requires authorisation of the library. This can be done very efficiently if the computer is on-line, but other options exist if your music computer does not have an Internet connection. In total, the library and front-end require just under 400MB of hard drive space. What you get is, essentially, a collection of breakbeat-style drum loops, and the sample material is organised into two categories of presets.

First up is a collection of just over 200 rhythmic loops. These are grouped into categories of between seven and 22 loops based upon their original tempos, with tempos covering a huge range of 45-240bpm. Each loop is available individually and uses the Beat Machine mode, with the full loop mapped to C1 and the sliced-up version of the same loop then spread across the rest of the keyboard. Second, the same groups of loops are organised into Multis, each one mapping all the loops from one of the tempo groups to individual keys in Beat Machine mode. An additional set, referred to as XX Multis, takes this approach further by combining several Multis so that every key has a Beat Machine loop mapped to it. Rather oddly, these XX Multis do not have the Sync button engaged, so they play back at the original tempo rather than the project tempo, although this is very easy to rectify if required. These preset combinations provide the user with the best of both worlds — either work with an individual sliced loop or multiple loops, all of which can be synced to the project tempo as needed. That said, as only one of these presets can be loaded at once, if you want to work with several beat-sliced loops in a particular song, this requires several instances of the Intakt plug-in to be loaded.

So much for the organisation. What about the content? Eclectic is probably the best description — all the loops seem to be based around live-kit playing, but these are far from straight drum loops. There are also plenty of percussion elements added to introduce some extra spice. In addition, many of the loops have been subjected to some studio processing, and this varies between just some subtle ambience through to a little lo-fi treatment. Interestingly, this has all been done at the recording stage, as no use is made of Intakt 's own processing possibilities. The recording quality itself seems to be very good indeed.

However, perhaps the best feature is the playing and, more specifically, the attitude provided by the loops. This is first class. At lower tempos, there is plenty here that might suit some hip-hop or R&B productions, provided that they were of the more grungy variety. At mid-tempos, there is material that would work in a rock or funk context — although you might want to add an 'alt-' to both of these genres, as the playing is suitably (and very inspiringly) quirky. At higher tempos, there are loops that would work in harder-edged electronica or dance styles (think the Chemical Brothers or The Prodigy) with enough going on to make things sound aggressive and a little extra on tap via Intakt's Lo-fi, Distortion, or Filter processing if required. All in all, these breakbeats are inspirational and have plenty of character.

While I've no reservations about the quality of what is offered by The Operating Table, some might suggest that the quantity (400MB) of material is a tad on the skimpy side. As a comparison, a good number of the other Intakt/Kompakt libraries I've looked at, including some of those reviewed back in the SOS February 2005 issue, weigh in at over a gigabyte of sample content. Obviously, size is not always important, but if I could give The Operating Table two ratings then it would be five for the quality of the content but perhaps three for the quantity — there was some great material, but I was left wanting more. Four stars it is then. Overall, however, if you like your breakbeats to have attitude, then these loops are certainly worth a spin. John Walden

As suggested by the title, this is John Tejada's follow-up to the original two titles in this hip-hop series, comprising over 100 construction kits in audio, Acid ised WAV, and REX formats. In testing, I explored the WAV loops and one-shot samples using Sony Acid Pro v5. The set includes nearly 1500 Acid ised WAV files, totalling about 1GB. Usefully, both tempo and key are specified in the folder name for each kit. Each construction kit is based around 10 or more loops/one-shots and also includes between one and four short 'pre-mixed' WAV files that demonstrate how the individual files can be arranged. 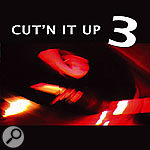 The original recording tempos range between 95bpm and 110bpm, and the majority of them are in minor keys — this gives the melodic or chord-based loops a 'down' feel which is very much in keeping with current hip-hop sounds. In terms of content, Cut'n It Up is certainly an apt title as, aside from a main drum loop within each kit, the rest of the loops and one-shots are dominated by chopped-up sounds, hits, and chord-stabs. Auditioning these individually might leave you wondering whether anything really musical could be constructed from them at all. However, the pre-mixed loops are an education in themselves and demonstrate John Tejada's production chops — the end results can be very musical indeed.

Styles vary across the various construction kits, but a commercial tone dominates. There is plenty of radio-friendly hip-hop or R&B material here — think Outkast, Nelly, or Missy Elliot rather than the grittier ends of these musical styles. The sounds themselves are uniformly good. The drum loops offer some nice grooves and the kits used, while varying in style from classic drum machines to what sound like processed live kits, all have plenty of bottom end and attitude. The majority of the construction kits include one-shot snare, kick, and hi-hat samples for those that want to construct some variations — although the REX files obviously add further flexibility for slicing and dicing. Guitars and organ sounds are plentiful, but there are also lots of horn, synth and turntable loops or hits. An additional collection of turntable scratches is included and many of these are, usefully, quite rhythmic.

While I'm not sure there is anything revolutionary about the musical territory of Cut'n It Up 3, it is jam-packed with excellent material. With some suitable adjustment of tempo and pitch, it is perfectly possible to mix and match between the various construction kits to add further variety. All that would be required to complete the picture is your choice of rapper and melodic vocal hook. The only real downside is for those working in library/production music, as the license terms do not allow the loops to be used in that context. Otherwise, for producers of commercial hip-hop or R&B, Cut'n It Up 3 is well worth auditioning. John Walden

The subtitle to this collection is a pretty accurate reflection of the 25 drum construction kits and 1500 loops/hits which are spread over the two discs. Like all the Drums On Demand volumes, this collection is available in either 16-bit or 24-bit WAV, REX 2, or Apple Loop formats, although when ordering you can purchase a second format for a small supplement in price.

The original tempos of the kits and loops here vary between 90bpm and 188bpm, but the scarier tempos do include some half-time patterns. In terms of styles, the playing would suit all kinds of modern rock, covering the ground between Nickelback through to punk-infected Green Day and plenty more besides. The quality of both playing and recording is consistently good and this makes it easy to combine loops from the different construction kits. So far, so good — some very good-sounding loops, but nothing too far removed from the norm for a rock-orientated drum-loop collection. However, what makes this particular title interesting is some aspects of the formatting and organisation of the material.

For example, in the 24-bit Acid ised WAV collection, there is not only plenty of material within each construction kit (40 or more loops on average), but the conventions used in the file labelling are excellent. Thus, each main loop has a '!' character at the start of its name, which causes all the main loops to appear first in any browser window. In addition, the loops are labelled Verse, Bridge, or Chorus, with variations indicated by Alt, Fill, or Crash. This might sound like a small detail, but it makes a huge difference when auditioning loops to build a complete drum arrangement for a song. Furthermore, each song kit also features some loop layers for the main loops with kick, snare, hi-hat, and crash isolated. These can be re-combined to add further variety. Finally, each song kit also includes some single hits. These could easily be loaded into a sampler for DIY pattern-creation, as many samples feature two or three samples suitable for velocity-layer construction.

If that wasn't enough, this library is also available in a multitrack format on a pair of DVD-ROMs. As far as I can tell, this is a true multitrack recording — multiple mics recording the same kit, with the consequent spill between each track and including overheads and more distant room mics. This is a massive collection of loops, but fortunately the same attention to detail has been paid to the organisation and naming of the files. The Drums On Demand web site recommends using the stereo set for basic song construction before moving to the multitrack versions for fine-tuning. This is good advice, but the degree of control available with the multitrack set is very impressive.

The quality and quantity of the loops themselves would earn this library a very credible four-star review on their own, and the collection is certainly good value. However, the extra attention to detail applied to the organisation of the material makes it a pleasure to work with. For those about to rock, Drums On Demand Volume 3 is an excellent choice. John Walden