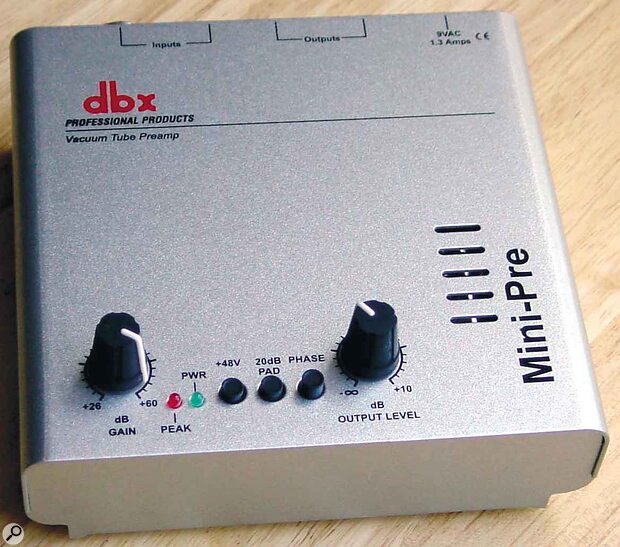 The Dbx Mini Pre is a simple and inexpensive mic preamplifier with phantom power, using a hybrid valve/solid‑state mic preamp housed in a compact desktop package, and powered from an external PSU. This arrangement means that the dual‑triode 12AX7 valve circuitry doesn't run at the same high voltage as in traditional designs, though many low‑voltage valve circuits have been built that produce a musically satisfying sound. Ruggedly built from sheet steel, the Mini Pre offers both a balanced XLR mic input and an unbalanced line/instrument input on a jack with a 1MΩ input impedance. The PSU plugs into the rear panel and a small plastic hook helps secure the cable. Both XLR and jack outputs are fitted, and may be used with balanced or unbalanced connections.

The input Gain control provides up to 60dB of mic or instrument gain, with the option of switching in a 20dB pad if the input signal is too hot. A single red Peak LED monitors signal clipping, and it is recommended that the gain be adjusted so that the peak LED only lights briefly on the loudest passages. A green LED indicates that the unit is powered up, and 48V phantom power can be switched in when necessary, though this has no status LED. A Phase button and an Output Level knob complete the control section, with up to 10dB of additional output gain available. Note that there's no mic/line switch and, while the the XLR and jack inputs seem to be live simultaneously, you can't use the preamp to mix mic and line signals, because the line level drops significantly when a mic is plugged in — presumably because of the large impedance difference.

The Mini Pre has a frequency response that is only 3dB down at 45kHz, and its 125dBA signal‑to‑noise ratio is only a hair worse than you'd expect from an all solid‑state design. I compared its subjective performance with my SPL Channel One, and was pleasantly surprised by the transparent, lively sound. I don't think the sound has quite the same star quality as the Channel One, but it comes a lot closer than I'd have expected for the price, and noise was never an issue when close‑miking vocals. Nevertheless, the lack of proper metering does mean you have to be quite careful setting the Gain control.

In brief, I think the Mini Pre does what it sets out to do with style and economy. Because it can double as a valve DI box, it will make a useful front end in any small system. Such corners as have been cut don't affect the sound quality, and the valve circuitry adds class to the sound without making itself too obvious.