Most cable testers are designed to test loose cables like guitar or mic leads, where both ends can be brought to the test box. While dbx’s CT3 ‘Advanced Cable Tester’ allows for this, it’s intended also to make it easy to test installed cables, such as lines running between a control room and recording space.

It’s housed in a substantial box and sports a lot of connectors: XLRs in five-pin (for DMX lighting) and three-pin (audio) variants; four-pole Speakons; five-pin MIDI DINs; RCA/phonos; BNCs; quarter-inch TRS jacks; 3.5mm TRS mini-jacks; RJ45 (for Ethernet cables); and RJ11, for telephone cables. The correspondingly numbered terminals of each connector are wired together, so cables with any compatible plugs on each end can be tested. The CT3 also has a pair of 4mm banana sockets and a set of test probes for continuity testing of fuses and other cable/connector types. 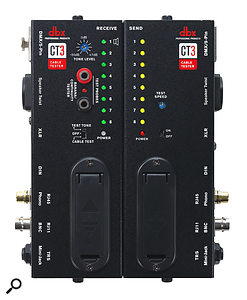 The CT3 actually comprises two separate steel boxes. When testing loose cables, these stay on the base plate and the whole ensemble can be used as a conventional cable tester. However, for testing installed cables, the two halves (Send and Receive) can be separated in mere seconds, so they can be placed in different rooms at each end of the cable under test.

The Send unit routes a low DC voltage in a repeating cycle around each of eight testing lines, which are connected to the corresponding terminals in the connectors (eight lines are needed to cater for the RJ45 sockets). The ground terminal of each connector is Line 1. The Send and Receive halves each feature a column of eight LEDs, and the speed at which the system cycles the test voltage around the eight lines is adjustable via a front-panel screw-driver trimmer, with the speed range extending between agonisingly slow and a stroboscopic blur!

When a cable is plugged into one of the sockets on the Send unit, any short circuits are identified by two or more of the yellow LEDs lighting in sequence as the voltage is routed around the terminals — the lit LEDs indicate which terminals are shorted together. Assuming no LEDs light up during this first stage, the other end of the cable can be plugged into the Receive unit, and the LEDs on both units should illuminate together in sequence, indicating which Send terminals are connected to which Receive terminals.

So, testing a properly wired mic cable, for example, causes the LEDs for lines 1, 2 and 3 to light, one after the other, followed by a period with no lights (while the other five unconnected lines are checked), and then the 1, 2, 3 sequence repeats. If the connections in the cable are crossed, the green LEDs on the Receive unit light in a different order from the yellow lights on the Send unit.

The continuity tester mode connects the internal 9V battery to the two 4mm banana terminals via a ‘beeper’ and another red LED. A secondary function is also activated in this mode: when testing a cable connected between the Send and Receive units the beeper sounds each time the test sequence passes through Line 1. If the Receive unit is switched to Test Tone, a crude sinusoidal signal generator outputs a (roughly) 1kHz tone as a balanced signal (hot on lines 2 and 4, cold on line 3, ground on line 1). It’s not a pure sine wave but adequate as a line-checking signal, and the output level is adjustable, via another screwdriver trimmer, between -30 and +8 dBu. The panel is marked 0dBu at the 12 o’clock position, but I found it actually delivered about -8dBu there, and 0dBu was achieved with the trimmer just past two o’clock. Nevertheless, this facility is really useful for identifying mic and tie lines, and at its maximum output level can even make audible noises through most passive loudspeakers.

Building the test-tone generator into the Receive rather than the Send unit is an odd decision, and means the sexing of the XLR connectors isn’t what you might expect: the Receive unit has to have a male XLR connector to access the test tone signal without needing adaptors, making the Send and Receive labelling rather confusing. (‘Tester’ and ‘Sounder’ respectively might be more meaningful names.) If you weren’t already confused, the five-pin XLR on the Receive unit is a female type — the opposite of the three-pin XLR. (In dbx’s defence the five-pin XLR is primarily for DMX lighting cables, and the DMX standard calls for controller outputs to be on female connectors.)

Most of the time, any potential confusion between the roles of the two halves won’t intrude in operation — you simply plug cables in and watch the lights. But when testing mic lines between a control room and live room, it would be very easy to wander into the Studio with the Send unit only to discover that the XLR mic cables can’t be plugged in because the socket is the wrong sex. Your technical sensibilities might also be jarred each time you’re forced to plug something marked ‘Receive’ into a device’s input to hear the test tone!

There’s no doubt that, overall, the CT3 is an effective and useful cable tester. It is certainly well built and appears pretty solid and reliable, and it caters well for most common audio and data connectors. The separate sections and auto-cycling line test make testing installed cables really easy — that’s a rare and genuinely useful feature, which will single the CT3 out as the ideal cable tester for many. However, there are a few potential issues, which any prospective purchaser should consider.

Firstly, there’s no facility to check for connections to the metal shells of XLRs. In commercially made cables the shell is often wired directly to pin 1, and in my experience this frequently causes ground-loop problems. So I was a little disappointed that the CT3 is incapable of indicating this condition automatically (it can be checked for manually using the continuity test mode).

The second issue concerns the testing of cables with intermittent shorts or breaks, which manifest only when the cable is flexed — another very common fault condition. With any automated test cycle these fault conditions can be extremely difficult to find, and although the automated sequence can be slowed to allow some cable flexing while each line is energised, that means an interminable wait for the sequence to work through the unused test lines. It’s perhaps worth noting, then, that dbx’s smaller, simpler CT2 cable tester employs a rotary switch to test each connection path manually.

A third issue, and possibly a deal-breaker for many, is that testing guitar cables with quarter-inch (mono) TS plugs is not straightforward, as the quarter-inch sockets are TRS types. When a TS plug is inserted, it creates a short between lines 1 (sleeve) and 3 (ring). This generates a confusing display of LEDs on the Send and Receive units, and while the manual suggests plugging the Send side in only part way, the LEDs still need careful interpretation. Perhaps extra switches on the Send and Receive units to select two- or three-pole modes for the quarter-inch socket would be a worthwhile addition.