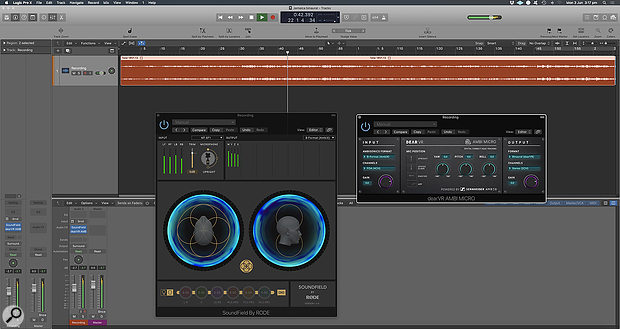 Oh dear. Towards the end of my article on working with Ambisonic audio in Logic Pro X (SOS June 2019: https://sosm.ag/logic-pro-0619) I wrote: "You need third-party plug-ins to produce true binaural output from Ambisonic data, and these all cost money...". Of course, no sooner was the article published than I found one that's free! German company Dear Reality produce a range of plug-ins designed to take a number of mono and stereo sources and build them into what they call an "ultra-realistic virtual acoustic environment"; they output audio data in an Ambisonic format. This is quite clever, as this enables the user to decide what the final surround format (5.1, quadraphonic, binaural etc.) should be and how they want to produce it. Intended as a simple way to monitor the result, the DearVR Ambi Micro plug-in takes Ambisonic data as its input, and outputs stereo binaural data. Best of all, it's free — you need only to create an account with Dear Reality. Installation is simple. I installed the AU version, but it also comes in VST and AAX flavours.

I listened — and it was a revelation. It was as if my head was where the microphone was set up.

Dear VR Ambi Micro accepts Ambisonic data in a range of formats. You're particularly well served if you have a Sennheiser Ambeo mic, as it will accept A–format data from that mic without further processing, but as my Ambisonic recordings were made with the Rode NT-SF1, I decided to use B–format (Ambix) for input, because that can be produced by the Soundfield by Rode plug-in. The screenshot shows how it hangs together. The Soundfield by Rode plug-in goes in the Audio FX area first with its output set to B–format (Ambix), and the DearVR Ambi Micro is next with its input set to B format (Ambix). Its output can be set to a number of binaural formats, such as 'Binaural (YouTube VR)' and 'Binaural (Facebook 360)', but I elected to use 'Binaural (DearVR)' as that appears to be the 'vanilla' binaural setting. And that's it, really. I plugged in my headphones, sat back and had a listen.

I auditioned a recording I'd made while writing the earlier article on Ambisonics, where I'd placed eight musicians in a semi-circle around the NT-SF1 mic. I listened — and it was a revelation. It was as if my head was where the microphone was set up. I could hear and place each musician as they were spread out in front and to the sides. The effect was spookily realistic and quite addictive. I ended up going through every Ambisonic recording I have! The plug-in allows a little processing of the binaural image, in terms of 'pitch', 'roll' and 'yaw' — in other words, rotation in each of the three spatial dimensions — but it doesn't need any more input.

Back in the day when I was a UNIX programmer, I bought into the UNIX idea of the pipeline — instead of big monolithic programs, you strung together a line of small programs, each doing just one job very well, taking its input from the previous program and passing its output on to the next. DearVR Ambi Micro is, it seems to me, a beautiful realisation of the pipeline principle in a plug-in, and is well-nigh essential if you want an easy and straightforward way to listen to Ambisonic data as binaural sound. Highly recommended.