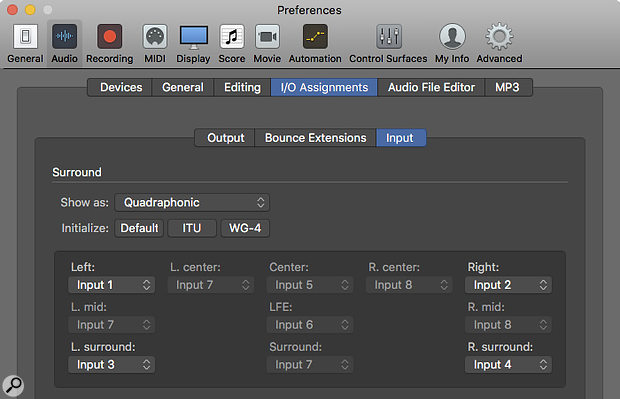 Screen 1: In order to be able to record and manipulate Ambisonic audio in Logic, channels must be set to the Quadraphonic format.

We explain how to get Ambisonics working in Logic Pro X.

Anyone who read Sam Inglis' excellent review of the Rode NT‑SF1 microphone (SOS December 2018) would have been intrigued at the very least by the possibilities offered by this extraordinary mic. These possibilities are the result of it being an Ambisonic microphone, and I was sufficiently interested first to investigate and later to buy an NT‑SF1. Since my DAW of choice is Logic, that became the medium of my investigation. This article, then, is about what I found when starting to work with Ambisonics and Logic.

The NT‑SF1, like many Ambisonic mics, consists of four cardioid capsules fixed in a tetrahedral arrangement, capable between them of picking up all ambient sound around the mic together with directional information. To the audio interface, it appears as four separate mics, and so the DAW needs to be able to record four streams of audio data. All the clever stuff is then either performed in dedicated hardware or in the DAW using a special plug‑in for the purpose. There are several available but I used the Soundfield by Rode plug‑in, which is designed for the mic and is freely downloadable from Rode.

When one thinks of Ambisonics, one often thinks of surround sound, 5.1, 7.1, binaural and the rest, but what excited me was the ability to specify 'virtual' mics — mono or stereo, cardioid, omni or whatever — for use in normal stereo productions (as described by Sam). I really liked the idea of this because I am of the school of thought that tries to delay decisions as much as possible. So for instance I never use compression, EQ or stuff like that while recording, and now it seemed I might be able to delay even the choice of mic type and position until mixdown!

Come recording time, your four streams of audio data could of course be processed as four separate tracks, each with its own mixer channel, but the plug‑in expects all four tracks to be present in one channel. Fortunately Logic supports this by offering 'Quadraphonic' as one of its channel formats; that is, Logic thinks it is handling surround sound data in quadraphonic format, which works fine for our purposes. Here are the steps you need to perform to be able to record and handle Ambisonic data in Logic Pro X:

2. Go to Logic Preferences and, on the Advanced Tools tab, ensure the Surround option is ticked.

3. Go to Logic Preferences / Audio / IO Assignments, click on the Output tab and, under the Surround heading, set Show As to Quadraphonic, then do the same in the Input tab (Screen 1). You should see that four input channels are not greyed out but have been set to the first four inputs in your audio interface.

5. Now create a new audio track in the project with input and output both set to Surround (depending on your audio interface, the Surround option for input might be at the bottom of a long drop-down list). At this point it will be worth saving a project template to avoid having to keep doing all this.

You should now be able to record the output of your Ambisonic microphone. Remember that the gain setting on all four preamps must be matched or the Ambisonic effect will not work. 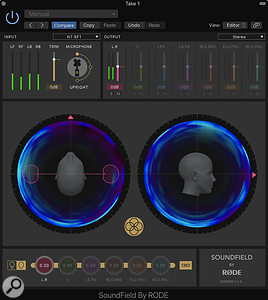 Once the editing is complete, create a channel for each virtual microphone you need and then copy the edited regions to every channel. On a recent session, for instance, I decided to use eight virtual mono cardioid mics for the musicians I'd recorded. The particular circumstance was recording the Bath City Jubilee Waits, and instead of having to close‑mic each individual musician, I arranged them in a semicircle around the NT‑SF1.

The Logic mixer should look like it does in Screen 3. You'll see that I have routed the output of each channel to Stereo Out instead of Surround, and panned the channel appropriately in the stereo field. 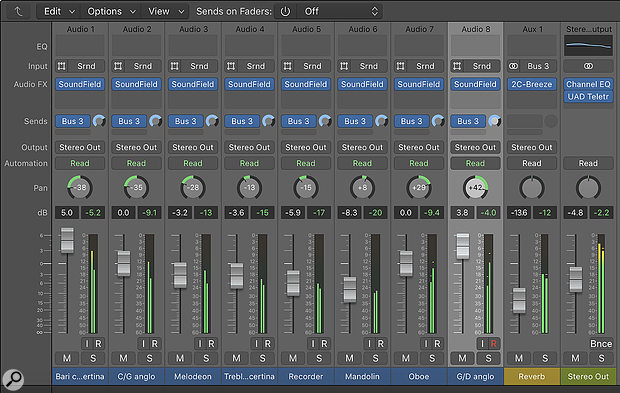 Screen 3: The mixer for my Soundfield recording project. All eight channels are derived from the one Rode mic, but with their polar patterns and angles adjusted so that they function as ersatz close mics.

So, how does this compare with close‑miking the individual musicians? Well, on the plus side, setting up was much simpler and far less intrusive for the musicians. There were no mic stands and cabling to get mixed up with their music stands and they, as amateur musicians without much experience of being recorded, found the single mic far less intimidating than close mics. Indeed, they soon forgot about the mic and just got on with making music, as I'd hoped; hence the performance was, I believe, less forced, more natural and generally better and more confident, which was all reflected in the final recording.

Of course there are down sides. Mixing took longer, as setting up the virtual mics takes time; but the main thing to be aware of is that this isn't a complete substitute for close‑miking. You forfeit some control over levels and panning: for instance, it doesn't work well to try to pan a channel far from its original direction in relation to the mic. This is because there is quite a lot more spill between the virtual mics than there would be between real mics located close to the performers. You also have to take account of this when you're adjusting channel volumes.

The best way to regard an Ambisonic mic used in this way is as a sort of 'super‑stereo' microphone. With a stereo mic, you have the same advantages as with the Ambisonic mic in terms of ease of set up and reduced intrusiveness, but you have no control at all over stereo positioning or relative volume levels. The Ambisonic mic gives some of that back, admittedly to an extent which may be limited compared with close‑miking — but having even reduced control over panning and levels can massively improve the balance. Horses for courses, I'm glad to have the NT‑SF1.

There is one more thing I have to tell you about Logic and Ambisonics. Before I bought the mic I wanted to try out the principle, and there are many Ambisonic files on the Internet you can download (I started with the example files Rode provide on their website). So I set Logic up as described above, imported a file and... it didn't work. Only two tracks of the four would play, as you can see in Screen 4.

Screen 4: Some versions of Logic Pro X will play silly buggers if you try to import Ambisonic audio that was recorded on another DAW. Fortunately there's a workaround!To cut a long story short, several SOS Forum members checked this out and we discovered this was a bug introduced with Logic 10.4. You can import an Ambisonic file into Logic 10.3 and all is sweetness and light, but 10.4? Sorry. It has been reported to Apple as a bug in the current (at the time of writing) version 10.4.4, and who knows? It might be fixed by the time you read this. This is a potentially significant problem because there are portable recorders, like the Zoom F4 and F8, which will produce Ambisonic files, and so would be useful for making recordings on site that you could then import into Logic for mixdown. This would not, on the face of it, be possible while this bug is present. However, I have devised a workaround, which works because Logic will successfully import Ambisonic files it has written itself. So here we go:

1. Set up Logic for quadraphonic surround as described above.

2. Drag the Ambisonic file onto the Logic arrange area. You will be asked what to do with it. Select Create New Tracks; this will create four mono tracks with the input set to mono/surround and the output to surround. You will also have the quadraphonic surround panner present on each channel.

3. For each track in turn, open the panner and set the pan for the track as follows:

4. If you put the Soundfield by Rode plug‑in on the Master channel you will find it works as expected, and this may be all you need to do if you are going to do surround work. However, if you want to try the sort of stuff I describe above you may want to do the following steps, which will use Logic to write a new Ambisonic file it will be happy with.

5. Click Bounce on the master channel and make sure that Surround Bounce and Add To Project are both ticked. Set file format, resolution and bit rate appropriately for your project.

6. Click OK. When the file save screen comes up, choose an appropriate filename but don't (for neatness, mostly, but also to avoid deleting the file accidentally) save in Bounces. Save in Audio Files for the project instead.

7. The bounced file will now appear in the Project Browser and it will now be recognised as a quadraphonic file by Logic, and be fully usable so you can drag it to a quadraphonic channel and proceed as above.

One last thing: Logic includes a binaural panner, but this is intended for setting normal mono and stereo sources into a binaural space. It isn't intended for use with Ambisonic recordings. You need third‑party plug‑ins to produce true binaural output from Ambisonic data, and these all cost money so as yet I haven't tried any. The basic approach is to use the Soundfield by Rode plug‑in to convert the NT‑SF1's output to Ambisonic B‑format. The binaural plug‑in should then be placed in the channel Audio FX area directly after the Rode plug‑in to do its magic. This is an area I want to explore once my funds have recovered a bit, and of course I can then revisit all my earlier recordings to rework into binaural output should I so wish.