EastWest set themselves a technical challenge and a half with this solo operatic vocal instrument. 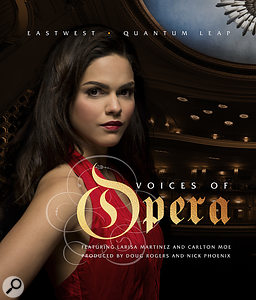 There is nothing quite like the human voice; no instrument can generate the visceral thrill and personal connection that a well-trained singer can. As such it's no surprise that vocal instruments are something of a holy grail in the virtual instrument world, being both the most desired tools of expression and also the most difficult to technically achieve. Done well, virtual vocal instruments can provide a voice for the voiceless, lending deep expressive potential to any musical scenario.

Considering EastWest's recent commitment to producing vocal-based virtual instruments, a solo operatic instrument seemed inevitable. Following hot on the heels of Voices Of The Empire and Voices Of Soul, the company have chosen to make a big stylistic splash with Voices Of Opera. As this new substantial virtual instrument enters the field in the shadow of their own acclaimed Hollywood Choirs and other well-established competitive products, does Voices Of Opera live up to the expectations?

There is perhaps no greater challenge in the virtual instrument field than the creation of an effective solo vocal instrument — even the market–leading products in this field demonstrate the difficulty of the task. The production challenges are legion: there is no ensemble thickness behind which to hide, and no easy points at which to achieve easy legato transitions — not to mention the difficulty of creating realistic dynamics and transitions when there is a major operatic vibrato in the mix. The highly personal and naturally amplified technique of the operatic vocal style exposes the merits or flaws of every production decision. In short, this was quite the challenge for EastWest to take on, but they have largely succeeded with a product they describe as a "labour of love".

Voices Of Opera is a highly musical instrument which represents a brave step forward in EastWest's ambitious Voices series.

Voices Of Opera is a 40GB collection of hundreds of multi-sampled instruments, brought to you by the now familiar production duo of Doug Rogers and Nick Phoenix. It is hosted in EastWest's proprietary Play engine, which comes bundled with the product and comes in both stand-alone and plug-in flavours. Under the guidance of Rogers and Phoenix, EastWest regularly create some of the most highly produced and polished products on the market. An example of their philosophy is the much-lauded Spaces II Convolution Reverb: those who purchase this product receive not merely a nice–sounding collection of convolution–captured spaces, but rather a curated catalogue of highly produced reverb presets in which each space was captured with specific gear choices made to highlight the desirable characteristics of the spaces. Such attention to detail and gear-geekery is found on all of their recent virtual–instrument releases, presenting pristine and characterful sounds with additional customisation options in the Play engine.

Rather than create a faceless vocal instrument, EastWest went with the strategy of capturing the personalities and vocal strengths of notable individual performers. The chosen singers — Larisa Martinez and Carlton Moe — are both at the cusp between vigorous youth and mature technical control. Tenor Carlton Moe's warm-yet-sturdy timbre has lead him through various high-profile opera productions to the current cast of Phantom Of The Opera on Broadway. Stunning soprano Larisa Martinez's vocal character varies from a striking crystalline pianissimo, to a warm and intimate medium dynamic, to a powerful yet round fortissimo. This diverse yet highly controlled timbral toolkit has resulted in her being chosen to grace opera stages across the world, along with recent high-profile collaborations with Joshua Bell and Andrea Bocelli.

Voices Of Opera employs the clean GUI layout we have come to expect from EastWest instruments, and the main screen includes useful controls for vocal tuning (coarse and fine), as well as the ability to switch between stereo, mono–sum, mono left or right, and left-right channel swap modes. One standard EastWest tool that truly makes an immense impact in this instrument is the stereo double tool, allowing users to dramatically widen the stereo spectrum and thicken the vocal timbre. Further manipulation is available via the effects page, which includes EW's SSL channel strip and SSL compressor.

As is standard for EW instruments, there is an excellent on-board reverb as well as the ability to individually mix close, rear, and room mics. The front mic for both singers was the characteristic rich and warm Telefunken 251, while a pair of classic Cole 4038s was placed behind the singers. A vintage tube-based Decca tree including Neumann M50s and AKG C12s was employed to capture the room sound, while duet phrases were also unified with a Neumann U67. I have to say I find it simply astounding that we have reached a point in music history where even amateur productions can access such high–quality musicians, produced with rare and expensive vintage gear and with such lofty production standards.

Voices Of Opera is organised into Sustain, Staccato, Legato, Combo, Words, Phrases and Keyswitch folders. The first thing I attempted was to set the two singers together as a duet using Sustain patches singing on an 'Ah' syllable. With the exception of a handful of uneven releases, the high quality of these two voices not only created an amazing balance and blend, but even functioned well when set as a trio or vocal quartet. Further shivers were achieved by writing seventh and ninth chords, showing off the deep production quality of the instrument. This immediately inspired me to set the soloists along with similar vowels in Hollywood Choirs. Just as how one can achieve greater depth and expression by mixing string soloists into section and ensemble patches, the Moe and Martinez patches blend seamlessly with the choirs, giving them a new and more strident quality. 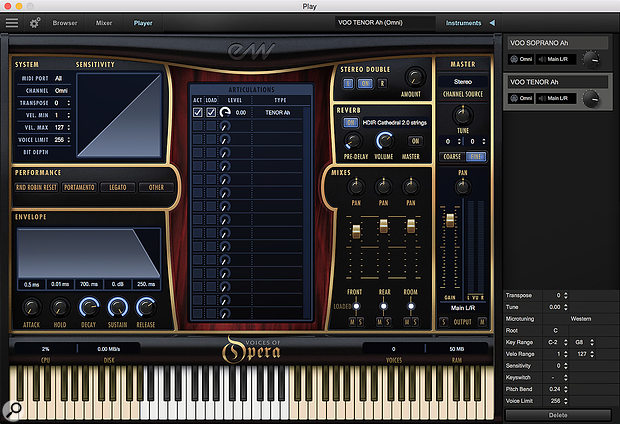 The Player page of Voices Of Opera's user interface.

The Sustain patches are particularly lovely. The soprano has three velocity layers, with the lowest dynamic sounding thin while present, moving to mezzo forte and fortissimo layers with great power, tone, presence and musical potential. There are strengths and weaknesses here. As a polyphonic instrument there are occasional legato transition hitches on the entrance of successive notes, something that becomes less noticeable when soprano and tenor are played together or layered with other instruments. The official walkthrough surprisingly does not mention this, but the 'hitch' problem is fixed by turning on the legato option in Play, leading to truly lovely and generally seamless phrasing. That being said, the categorisation of 'Sustain' patches here is appropriate, as these sounds function best in elongated orchestrations and single chord changes.

The Staccato folder contains 16 individual staccato recordings of neutral syllables such as 'Lu' or 'Te'. Identical for both voices, they sound best when combined in a duet or larger ensemble, even though some uneven releases occasionally mar the effect.

For those looking for a truly lyric option, the Legato patches will more than satisfy. These instruments come in both velocity–triggered and mod–wheel–controlled varieties, and for this reviewer they were the most versatile instrument and the big highlight of the package. Particularly evocative are the built-in portamentos into certain leaps, which are both realistic and frankly inspiring. While I've heard such wonderful musical leaps in various high–profile solo string instruments, such as the stunning portamento achievable in Cinesamples' Tina Guo cello, this is the first time I've encountered such depth with a solo voice. This is one of the noteworthy musical and technical achievements of Voices Of Opera, and sounds even better when matched with strings with similar legato ability.

Users looking for mod–wheel dynamics may notice that while the mod wheel sometimes controls dynamic levels, it cannot effect crescendos and diminuendos in held notes. The reason given for this seeming omission is that the high rate of vibrato created an insurmountable technical challenge. Furthermore, for those looking for ancient or renaissance styling with straight tone options, there is also no modification of vibrato available on these otherwise gorgeous sounds; this is rather entirely a soloistic package in the grand romantic opera tradition.

Particularly useful to certain users may be the patches in the 'Combo' folder. These are instruments that allow you to change syllables (before note attack) using the mod wheel, and provide round-robin patches (marked 'RR') that randomly change the staccato syllable every time a key is struck. The library also includes a limited selection of single words in Italian, sung very expressively on single pitches. While a word–builder option for a solo voice is currently not technically possible, the package does provide a keyswitch patch including all available words.

Voices Of Opera represents a brave step forward for EastWest, and one gets the feeling that we will be hearing Larissa Martinez's and Carlton Moe's digital doubles appearing on a number of film and game soundtracks in the near future. While there are unfortunately no current plans to create alto and bass instruments, EastWest have enthusiastically passed on their future plans for the 'Voices' series exclusively to Sound On Sound: the forthcoming Hollywood Backup Singers. This nearly completed instrument will feature a trio of singers — two of whom toured with and performed backing vocals for Pink Floyd — and will feature a word–builder section.

In the final analysis, despite minor flaws, Voices Of Opera is a highly musical instrument which represents a brave step forward in EastWest's ambitious Voices series. It is available as part of 65 existing products in the ComposerCloud subscription, currently priced at $19.99 a month and with a student discount available as well. While this particular author generally does not support subscription services, ComposerCloud is a high-quality exception which provides the best entryway into professional-level scoring products at an unmatched value. It is currently the best deal of its kind on the market, and becomes even better with the addition of Voices Of Opera. 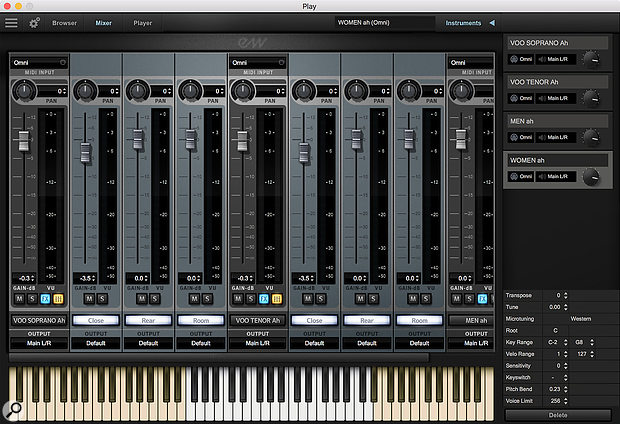 At first glance, the Phrases folder, which contains famous public domain operatic excerpts, seems no more than a bit of a production afterthought. After all, what composer would want a culturally knowledgeable player in the middle of a video game to accuse them of ripping off La Traviata? And yet these phrases can be triggered partially in order to be recombined into highly convincing new phrases, and the starting point of the phrases can be changed via the mod wheel, providing further customisation.

On EastWest's website there is a sample track titled 'Duetto Breve' [included above] which takes this approach. While it would require painstaking work, the payoff is clearly audible. I also had fun importing some of these phrases into Melodyne, re-pitching their notes in order to access new compositional possibilities. The vibrato of the original performances presented a challenge for note transitions in this approach, but it remains a compelling possibility — especially in modern electronica tracks, where vocal purity and some digital oddness may not offend.

Produced with the high attention to detail and polish we've come to expect from EastWest, Voices Of Opera effectively transfers the skill and musicality of world–class performers into a highly playable virtual instrument.