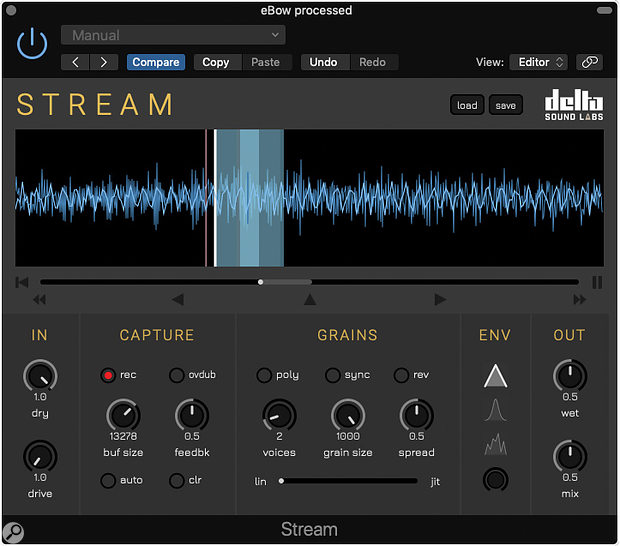 If you like looking to effects for musical ideas, this plug‑in's worth checking out.

Delta Sound Labs' Stream supports AU (for Mac) and VST (for Mac/Windows) plug-in formats, and is best described as a granular effects processor that can create anything from tempo-sync'ed textural delays to grainy, polyphonic pad-like sounds and drones. It works by recording audio into a buffer, then taking segments to be used as grains. I was intrigued when I first saw this plug-in demonstrated at Winter NAMM earlier this year, and it has since been updated to version 1.1.

Tours of GUI control can be a little dull, I know, but in this instance it's essential if you're to understand what's going on. On the left is the In panel, and here you'll find Dry and soft-clip Drive controls. Dry controls the amount of unprocessed signal that's fed to the output stage, as well as the amount of signal that's fed to the record buffer. In the Capture panel are six controls — two knobs for Buffer Size and Feedback, respectively, plus four buttons. By default, the Record button records the incoming dry signal directly to a circular buffer. When Auto is on the user determines the buffer size by starting and stopping the record process. The Overdub button and Feedback control allow the building up of a continuous layer based on the current buffer contents, with a feedback value of less than one causing a gradual fade to silence. The Buffer Size control sets the size of the buffer in milliseconds (the maximum is 20 seconds); the main display shows the audio waveform and also the position of the grains.

In the Grains panel are three rotary controls, three buttons and a slider. Here, the Voices knob selects between one and 16 voices, and setting this to zero mutes the processed output, allowing the dry signal only through to the output stage. The Poly (polyphonic MIDI) button overrides the Grain voices setting, instead creating polyphonic granular voices based on the MIDI input.

A Grain Size rotary control sets the size of each granular segment in milliseconds, while a Sync button locks the grain size to the DAW tempo and automatically jumps to the nearest subdivision (the minimum grain size is 1/32 of a measure). The grain Spread control adjusts the overlap between adjacent grains to smooth out the result, while engaging the Rev button causes the granular voices to be played back in reverse. With Spread set to minimum, the grains become audible as discrete events, and this can be useful in a rhythmic context. The horizontal lin/jit slider below this adds a degree of randomness into the playback position of each granular voice.

You can never entirely predict what's going to happen — but that's half the fun!

A single button in the Env section selects the grain window shape options, the choices being Triangle, Gaussian and Noise. Each results in a different sonic texture, so the only correct way to use them is to see what sounds right. Gaussian and Noise also offer a variable Q control to tighten up the grain shape, again providing a variety of textures. The Out panel has a wet/dry Mix knob and a separate Wet level control to make balancing more manageable, as adding drive at the front end can significantly increase the wet signal level.

MIDI Repitching and Sequencing can be utilised by sending MIDI note data to the plug-in, and Logic's unique approach to this is also catered for; Stream can be loaded as a MIDI-Controlled plug-in, with audio fed from a side-chain. MIDI operates in a mono mode by default, re-pitching all the grains to the same pitch relative to C3/Middle C. In other words, if you play the D above, the pitch will move up by one tone. With Poly MIDI mode on, Stream creates voices based on how many MIDI notes are played. When you're not pressing a key, no granular voices sound.

It's possible to step-sequence the buffer pitch across two octaves using the C-2 to C-0 MIDI note range, with C-2 positioning the main playhead at the beginning of the buffer. That leaves the playback bar underneath the display, which is used to control the playback speed of the grain-grabbing process from half to double the original speed. Less obvious is that it's possible to drag and drop an MP3, WAV or AIFF audio file onto the stream buffer and play back that audio providing the clip does not exceed 20 seconds. With a steady tone, you can get quite musical results by playing from MIDI.

While you can achieve some lovely textures simply by setting the controls and feeding in a signal, doing only that would mean missing out on the possibilities that result from automating the various parameters and switches, or controlling them from an external MIDI source. Stream can also wreak useful chaos on drum parts. You can never entirely predict what's going to happen — but that's half the fun! My early review copy lacked factory presets, but I'm told these will be available soon, including offerings from Richard Devine, Bill Van Loo, and other well-known sound designers.

If you like adding interesting texture to sounds, without making them completely unrecognisable, Stream offers a lot of creative scope and is well worth checking out.

This effect is great for creating textural sounds, and imposing intriguing chaos on all manner of input signals.