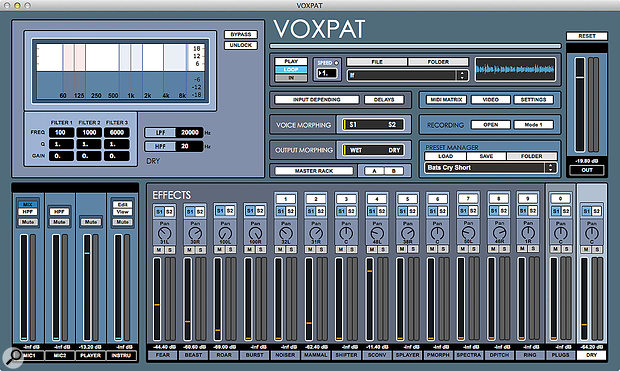 Digital Brain Instruments are carving a niche for themselves producing fun and intuitive interactive audio tools for games and films, and, with its intuitively deployed monster voice effects, Voxpat is their most inventive offering yet.

Following in the user-friendly footsteps of Talkie Box and Multiplex Vocoder, Voxpat is a stand-alone program that enables users to create monster, robot and animal voices by transforming a human voice with an interesting array of audio manipulation techniques. Up and running in an instant, and with recording your own voice or uploading a WAV made as smooth and painless as could be hoped, you’re quickly experimenting with Voxpat’s rack of 14 monstrous effects. This, of course, is where the fun lies, as those effects — Fear! Beast! Roar! — transform the human voice into anything from an angry space orc to a tinny robot at the slide of an intuitively presented fader.

Of the many tools in Voxpat’s box, I found Sample Convolution both the most interesting and fun to use. By applying the spectral envelope of a sampled source (such as a roaring lion or a revving engine) to the input signal (your voice), you are transformed into Aslan or Optimus Prime as you require. As with everything Voxpat does, user-friendliness and simplicity of presentation are winners here, and beginners will require no understanding of the physics of the spectral envelope to transform themselves into screeching mutant alpacas or hurl themselves into deep space. Or both, since Voxpat’s effects are designed to be used in combination, though more on the dangers of that in a moment.

Some of the more fantastical-sounding effects in Voxpat’s rack are actually derived from more familiar and prosaic tools: EQs, delays, pitch-shifters and variations in playback speed are all hard at work behind the scenes, though getting over-enthusiastic with Voxpat’s effects can become a battle against lost clarity, as a trade-off ensues between the believability of the monstrous effect and the enunciation of the spoken word.

While Voxpat’s Master Rack EQ can be useful for ducking some recurring problem frequencies (250Hz and 400Hz can be particularly troublesome when effects are used in combination), dialing a degree of intelligibility back into the mix with an EQ tweak further down the effects chain can have the effect of simply undoing your original intention, so subtlety is to be encouraged from the outset, both here and across Voxpat’s parameters. For example, while Voxpat will vary playback speed from anywhere between 10 to 400 percent, anything outside of a pretty narrow band can quickly become incomprehensible — so, as ever with wild beasts, it can be wise not to stray too far off track.

Ultimately, the pleasure of Voxpat is in its placing a pleasing variety of monstrous possibilities at your fingertips, and what it might occasionally lack in precision, Voxpat makes up for with the intuitive user-friendly fun it brings to the creative process. Greg McDonald