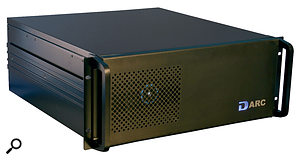 Every specialist audio PC builder seems to bring a slightly different flavour to the market, and if I were forced to summarise Direct Resolution products in a single phrase it would be 'rugged good looks and value for money'. The most distinctive feature of their systems must be the 19‑inch rackmount cases. These used to have a distinctive 'analogue vibe' about them, but the latest design (unveiled here for the first time) offers character in a rather different way. The eye is drawn to the fetching bi‑colour illuminated DARC logo, which displays both power and hard-drive activity, as well as acting as a touch‑sensitive on/off button.

With the Ultimate LE system under review here, Direct Resolution have also aimed at pushing CPU performance to new heights by employing two Xeon quad‑core processors with hyperthreading from the latest 5500‑series Gainestown range. These new Xeons feature the same 45nm Nehalem architecture as Intel's Core i7 range, but together they provide a massive total of 16 virtual cores! This augurs very well for audio performance, yet the overall system price remains competitive. Let's see if DR's Xeon‑based monster can wrest the performance crown back from the Core i7.

Like its predecessor, this new DR black rackmount case is robustly constructed, with a hinged and magnetically latched front panel that drops down to provide access to the optical drive and a couple of handy USB 2.0 ports. The only tiny flaw in this design is that if you use these ports to plug in a USB stick or dongle it's likely to get snapped off if you close the door again. Perhaps a recessed USB port tray could be fitted in the unused 3.5‑inch drive bay to avoid such dongle‑based disasters.

The case features a front‑mounted 120mm intake fan, with front-to-back airflow, which tends to keep systems cooler when bolted into a rack, compared with designs that attempt to pull in air via side‑panel vents. Inside I found it heavily lined with acoustic treatment to keep noise levels down, with most panels also having an internal bitumastic damping layer to prevent 'ringing'.

Internal layout was slightly more cramped than usual due to there being two physical processors, each a quad‑core Xeon 2.26GHz model with its own Noctua heatsink and low‑noise 90mm fan assembly. The Super Micro X8DALi motherboard also supports a huge amount of RAM, and this review model had 12GB fitted in total, spread across six slots. With all this extra hardware, as well as three hard drives and one optical drive, the Ultimate LE sported the most powerful power supply we've seen to date — a nevertheless quiet 750 Watt model from Corsair.

The system drive was a 64GB Kingston SSD (solid-state drive) featuring the popular Samsung chip set, and this had been partitioned for a dual‑boot Windows installation featuring a choice of XP Pro 32‑bit and Windows 7 Professional 64‑bit operating systems. This is the first time we've received a PC with an SSD, but they are a very attractive proposition for the musician: they are more resilient than traditional rotating drives, consume less power and are silent, but most importantly they offer lightning-fast performance. For a system drive, this extra speed translates to a much more nippy user experience overall.

For audio and sample storage duties, two more traditional 500GB 7200rpm hard drives had been fitted. One was intended for main project storage, with the second split into page-file and auxiliary duties such as backup and sample streaming. Completing this system was an ATI Radeon HD3450 graphics card, leaving two PCIe and two PCI expansion slots free. One of the latter was filled in the review machine by a Lynx Two soundcard. Some musicians might regret the total lack of Firewire ports, although you could add these fairly cheaply via another expansion card if required. 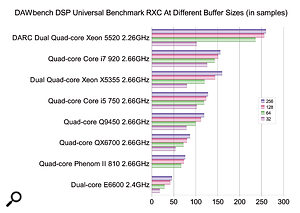 This dual quad‑core Xeon 5520 system streaks into the lead against single‑processor systems at all higher latencies when running a test based on Reaper's Reaxcomp (RXC) plug‑ins, and also thoroughly trounces its dual quad‑core X5355 Xeon predecessor. It's only let down by an unexpectedly poor result with the tiniest 32‑sample buffer size.

The DARC Ultimate LE was refreshingly quiet in operation considering the amount of power under its bonnet, and would be even quieter once bolted into a rack. The only audible noise came from the slow‑spinning front-panel intake fan, and the CPU idling temperature was a comfortable 40 degrees Centigrade. When I ran 100 percent CPU stress tests on the system, the hottest temperature any of the eight cores reached was a very safe 65 degrees. The fan noise level remained constant even then, so I suspect that idling noise could be lowered using a fan controller system such as the one featured in the Inta Audio machine I reviewed in the December 2009 issue of SOS.

Nearly all of the usually recommended Windows tweaks had been applied, although DR had left all the Windows XP visual fades and slide effects in place. However, on a machine this fast we can afford to waste some CPU cycles on a few luxuries! As I fully expected, especially given my recent experience with the similar Inta Audio dual‑boot setup, Windows XP Professional 32‑bit was only able to utilise 3GB of the available RAM, while Windows 7 64‑bit revelled in the full 12GB. Incidentally, those demanding loads of RAM will no doubt be interested in the DARC Sampler PC range, which supports up to 64GB!

However, both installations benefitted from the SSD system drive, which managed a superb maximum sustained transfer rate of 207MB/second and an amazing random access time of just 0.1ms, resulting in a noticeably quicker arrival at the desktop and faster application launches. The less exotic 7200rpm audio drives also managed an extremely fast 140MB/second transfer rate, which means you'd be able to run a huge number of simultaneous audio tracks, perhaps streaming video alongside.

SiSoftware's Sandra test suite measured a memory bandwidth of around 14 GB/second, which is slightly lower than the 16.5 GB/second achieved by the Core i5 and i7 systems reviewed recently in SOS. In the CPU tests, however, this dual-Xeon system romped ahead, gaining impressive CPU Arithmetic results of 123 GIPS (Dhrystone) and 108 GFLOPS (Whetstone), and CPU Multimedia figures of 240 MPixels/s (Integer) and 173 MPixels/s (Float). Overall, this gives a CPU benchmark score approximately twice that of the Core i7 920 2.66GHz model — good going considering the dual processors of this system were running at a lower clock speed.

My only concern at this stage was that not all software would be able to take advantage of 16 virtual cores, so I turned my attention to the DAWbench Universal benchmark to see how Cubase 5 coped. I needn't have worried: with a buffer size of 256 samples I initially managed to run a massive 233 Reaxcomp plug‑ins before glitching commenced, but suspected I could still do better, since at this point the Windows Task Manager still only showed an average core load of 84 percent, as well as fairly uneven loading across the 16 cores.

I persevered with different channel arrangements of the Reaxcomp plug‑ins to achieve a more balanced load, and eventually managed to achieve a truly impressive total of 260 plug‑ins with a 256‑sample buffer size, which places this system way above the previous Core i7 record‑holder. The smallest 32‑sample buffer size was, however, rather disappointing compared with the droop‑free performance as the Core i5 and i7 processors, but above this it was wonderful. I was able to perform the same tests under Windows 7, and managed to repeat my XP scores almost exactly, which is encouraging for anyone thinking of changing over to this newer operating system.

The guts of the DARC Ultimate LE are contained within a seriously solid 4U extended ATX rackmount case.

Direct Resolution's DARC Studio and Producer ranges have already proved very popular with musicians, and judging by my test results I suspect this DARC Ultimate LE model is destined to become very popular as well. The performance of the SSD system drive option was most impressive, but it was the twin Nephalem Xeon processors that were the stars of the show.

Overall, the Xeon 5520 processors seem to have reclaimed my 'ultimate performance crown' from the Core i7 series, but at a price. Core i7 machines are already significantly more expensive than most quad‑core alternatives, but dual-processor motherboards are also more expensive than their Core i7 counterparts, generally being around three times the price of mainstream single-CPU models. Unfortunately RAM prices have recently increased too, so the 12GB specified here also places a hefty premium on the price.

Nevertheless, Direct Resolution have managed to bring the review system in at just over £2000 (around $3300 at current exchange rates), while the more standard DARC Ultimate LE model with twin hard drives, 6GB RAM, and a single Windows installation comes in at £1889 ($3100). This seems an excellent deal to me, given the huge amount of processing power on offer.

If you need extreme processing power, a dual‑Xeon‑based system should certainly be on your shortlist. As usual, US‑based ADK Pro Audio (www.adkproaudio.com) have been quick off the mark with their Xeon Extreme range, while in the UK, Scan 3XS (http://3xs.scan.co.uk) offer their Xeon 55 Power DAW. Both ranges offer cutting-edge specifications, as well as support for mammoth amounts of RAM. I didn't spot any other specialist PC builders offering similar systems for the musician as we went to press, but I suspect they won't be far behind!

All Direct Resolution computers provide a minimum of one year Return To Base warranty (with DARC Ultimate systems this is increased to two years), while most parts have a three‑year warranty. All systems benefit from lifetime free technical support and advice by telephone or email. This last item is especially noteworthy, as many companies charge for support after the first few months. The tech support line is available from 9.30am to 5.00pm (UK time) Monday to Friday.

The DARC Ultimate LE is an audio PC that manages to be quiet and tasteful, yet extremely powerful — not a very common combination nowadays!