With upgraded mic amps and A‑D conversion in their MkII versions, do Focusrite's latest eight-channel preamps still lead the way at this price point?

Focusrite forged their reputation on high‑end consoles and preamps, and they still cater for the professional market with their superb Liquid preamps and classic ISA range, but over the last decade or so they've also looked to exploit their technology to create high-quality but affordable hardware for the ever-growing project-studio market. Obviously, some trade-offs have to be made in creating products for a specific price point, but Focusrite's quality-cost ratio has always been impressive.

Focusrite were one of the first major manufacturers to start designing mixer‑derived products intended for the 'post‑console' world, with the launch of their distinctive Green range of processors, in the mid‑'90s. They recognised that there was an embryonic market of home recordists with access to decent quality tape machines (and later DAWs), who only required one or two channels of high-quality preamp, EQ and compression facilities. The affordable Green range was lauded for the neutral sound of its preamps (amongst other things), and remains sought after long after being discontinued.

The Platinum range that followed, also included a number of preamps and dynamics processors (some still in production), but featured Class‑A transistor‑based preamps that could be pushed slightly harder than those in the Green series. Effectively, these were models designed to offer a little more 'character', with more second‑order harmonic distortion being introduced at the top end; the Octopre, Voicemaster Pro and Twintrack Pro all employed this design. Several years later, however, with the launch of the Platinum Octopre LE, Focusrite went back to op‑amp based preamp designs, derived from the earlier, cleaner‑sounding Green range. Some models, like the Platinum TrakMaster, swapped the original preamp design for the new part-way through their life-cycle — so an early unit will sound slightly different to a later one.

In recent years, Focusrite have been busy developing their impressive Saffire range of audio interfaces (some of the best available for the money, in my opinion). The Saffire interfaces include preamps identical to those in the Octopre LE but for one detail: high‑output mics used with loud, close-miked sources could cause the preamp to overload even when set at minimum gain, so in the Saffires the gain range has been dropped by 5dB, allowing it to accommodate correspondingly hotter signals.

The original Octopre and the Octopre LE weren't really 'full‑fat' and 'lite' versions of the same device: they were released several years apart, featured different preamp designs and had slightly differing functionality. The Octopre included one‑knob compressor‑limiters on each channel, and also offered a couple of optional digital output cards (but no digital input). It could transfer all eight channels as 24‑bit, 48kHz digital audio via ADAT, or four channels at 24‑bit, 96kHz via the S/MUX protocol. The LE version had no dynamics processors on board, but the single, optional digital card offered both ADAT in and out, enabling you to use it to hook up an ADAT‑equipped interface to a desk, or to outboard gear. I'm told by Focusrite that this was in part a response to the number of audio interfaces then on the market offering ADAT input and output ports.

The rear panel of the Octopre MkII — plenty of analogue I/O, but no digital input. Those ADAT opticals are output-only.

Of course, working practices have moved on again, with an increasing number of people now mixing entirely 'in the box' in software, requiring only a couple of outputs to monitor in stereo, or at most, a handful of outputs to plumb in a few choice pieces of outboard. In response. Focusrite have rationalised their Octopre range, the latest incarnations being the Octopre MkII and the Octopre MkII Dynamic reviewed here. Unlike their Platinum predecessors, these are intended as 'full‑fat' and 'lite' versions of the same concept. They've been branded as part of the Saffire range, sharing the interfaces' black-and-blue livery as well as their preamps (the Octopre LE preamps, with the 5dB lower gain).

The basic MkII model is essentially the same as the Octopre LE model, with the key difference that the digital card is now a standard part of the product, and now capable of 96kHz audio. You do, however, only get digital output via ADAT (the optional card for the LE provided both in and out). When I asked Focusrite about this, they pointed out that you'd be likely to be using it with an audio interface such as their Saffire Pro 40, or Liquid Saffire 56 — which means you'd already have access to plenty of I/O: the Octopre MkII is intended simply as a rack of eight mic preamps that can route audio via its analogue line outputs, or digitally via its ADAT port (or both simultaneously) into your desk or your audio interface.

The higher‑priced Octopre MkII Dynamic has all the functionality you'd hope to see on an 'ADAT expander'. As well as a compressor‑limiter on each channel, you get both ADAT in and out (again at 24-bit, 96kHz), which means that you could use it to add line-level I/O as well as in its main intended role — so it's much more than a rack of preamps. The mic amps are identical to those in the basic MkII and the Saffire range, with the emphasis on neutrality and transparency, which seems a sensible choice for such a product.

Both models are housed in a 1U rackmount chassis, with all I/O on the rear panels apart from the Octopre MkII's pair of 'combi' jack/XLR sockets on the front. All inputs are via combis and analogue outputs are balanced jacks. The more basic model offers word-clock input, while the Dynamic features word-clock in and out.

If you want both ADAT input and output, you'll need the MkII Dynamic — or perhaps consider trying to get hold of an end‑of‑line or second‑hand Octopre LE, or even look at some of the competition. To be fair, though, that's not the main aim of these products, and it's also worth pointing out that these aren't Focusrite's only options for ADAT expansion: you can configure any of their Saffire interfaces to operate in stand-alone mode. The only difference (other than the marginally higher price), is that you'll need to configure the interfaces via a computer before they can be used in this mode.

The preamps and converters of the Saffire range were discussed extensively in the Saffire Pro 40 (SOS January 2009) and Liquid Saffire 56 (SOS May 2009) reviews, so I won't dwell on them too much here. These are both very capable racks of preamps and converters for the money, and you get the bonus of instrument inputs on the front panel on the 'basic' MkII model. That's really just about it for the basic Octopre MkII's facilities. 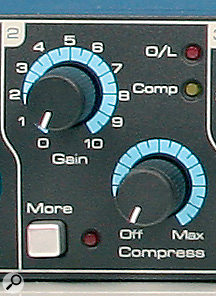 The Octopre MkII Dynamic has another string to its bow: you get eight 'one‑knob' compressor‑limiters, partly based on Focusrite's revered Red 3 VCA design — the decidely 'pro' Red series pre-dates even the Green range. The Red 3 is obviously a much higher‑specified processor, which offers far more control, but it is good to know that the lineage is there. There are much pricer products than the MkII Dynamic on the market that offer a similar combination of preamp and dynamics processors, and there are also stand‑alone eight‑channel compressors from the likes of SM Pro Audio, but I can't actually think of anything else at this price that includes both in a single product.

The compressors are included primarily for dynamic control during tracking — even in the era of 24-bit audio, some people still like to gently compress signals as they are being recorded, especially perhaps when recording bands in one take, or multitracking drums, for example. I was actually very pleasantly surprised by their performance. The compressors offered pretty transparent gain‑reduction, and I found the operation of the one‑knob control to be well thought-out: as you turn the dial you get a progressively lower threshold and increased make-up gain, and the attack and release times seem to change too. A 'more' button doubles the ratio.

The results can be surprisingly good, given the lack of controls, and the comps worked fine for me for light, set-and-forget dynamic‑range reduction of acoustic guitars and vocals. They'd certainly be useful to ensure decent levels if recording at 16‑bit, too, or in live recording situations, where levels are often less predictable. I'd prefer to be able to set the attack and release, but there's a limit to how much you can fit on a 1U front panel, and the simplicity of this configuration should certainly appeal to those for whom compression remains a dark art. The ADAT connectivity obviously would also allow the dynamics stage to be used during mixing, although I'm not sure I would choose to use so many identical hardware compressors, given the range of compressors available in any DAW.

As with the rest of Focusrite's Saffire range, the quality-for-the-price of the Octopre MkIIs is excellent. That said, both units are priced above the budget ADAT-equipped mic‑preamp competition (Behringer's ADA8000), and they're only marginally lower in price than Focusrite's audio interfaces, which can perform pretty much the same role.

Both of these units proved capable of good results, but I suspect the market for a bank of eight identical compressors may be a little smaller now than in the 16-bit days, when we all used to strive to keep recorded levels high. However, if you are one of those people who like to exert some dynamic control over your signals at the tracking stage, or do a lot of live recording, the Octopre MkII Dynamic could be just the right tool for the job.

If you're looking for an eight‑channel mic preamp with dynamics processors on every channel, there's very little competition — and none really in this price range, although you could team up an eight‑channel compressor (such as that offered by SM Pro) with an eight‑channel mic pre. If all you need is the eight‑channel mic preamp with A‑D converters, there are several options around. By far the most affordable is the Behringer ADA8000, which (in my opinion, justifiably) has established a better reputation than many processors from the same company. At or around the same price as the Focusrite offerings are the M‑Audio Octane and Presonus Digimax range. Move up a financial notch and you'll bring the rather nicer RME Octamic D into the equation, and further still, seriously good units from the likes of Audient.

Focusrite have revamped, updated and rationalised their eight‑channel mic preamps with these models, and while there are cheaper alternatives available, the Focusrite brand, in my opinion, still offers the optimum balance of price/performance for the budget‑conscious home‑studio owner. Unless you actually need the compressor‑limiters, the basic model may represent better value.