Based on an obscure 1950s valve preamp, the DA2 offers a lot of character for a relatively low outlay.

Based in the USA’s third most populous city, Dizengoff Audio are the latest venture by Chicago native (and founder and former owner of Black Lion Audio) Matt Newport. The company place an emphasis on building affordable tributes to classic recording gear, and while the name and leonine logo perhaps hint at an East-European provenance, the Chicago connection extends to the manufacture of their products, with the company sourcing as many of their components as possible from within the Chicago area — from the Peerless and EMI-inspired input and output audio transformers, to power transformers, enclosures and Bakelite knobs.

Dizengoff’s third and latest product, the DA2 tube microphone preamplifier, is Newport’s updated take on the short-lived and relatively obscure, but highly-regarded, Radio Corporation of America (RCA) Booster Amplifier BA-2C — that design was first catalogued in 1948 but by 1955 had been upgraded to become the BA-12A. Until the arrival of the Dizengoff Audio DA2, the RCA BA-2C seems virtually to have been ignored commercially in modern times, with — as far as I’m aware — only the more expensive Phaedrus Audio Phusion (reviewed in SOS August 2017) declaring its presence as part of its multi-preamp menu.

The RCA BA-2C was a compact, economically priced, high-fidelity two-stage unit and it was intended primarily for use either as a microphone preamplifier or as a booster amplifier for transcription turntables (its small form factor meant that it could be mounted inside the turntable cabinet). Its circuitry, which was regarded as conventional at the time, utilised two RCA 1620 metal-jacketed pentode tubes running as triodes. Although the BA-2C did not have an input-gain control, an inter-stage potentiometer enabled adjustment of the device’s output level.

The BA-2C and its descendants found wide use in film, broadcast, and recording circles during the 1950s. Their reputation as studio mic preamps comes not only from their use in the RCA tube consoles in Sun Studios and in RCA Studio B in Nashville, but also from the use of their basic circuit design in countless tube consoles during the late ’50s and early ’60s — one classic example is the in-house-built console in Pye’s Studio 2 in London’s Great Cumberland Place, which was famously used to record the Kinks, among many others.

The RCA BA-2C had an austere, one-knob front panel, whereas the 2U enclosure of the Dizengoff Audio DA2 carries pad (20dB), polarity-invert and 48V phantom-power switches, all of which are arranged in a column above a high-impedance quarter-inch jack instrument input. The large central Bakelite input level knob is accompanied by an imposing 1940s-style circular VU meter with an unusual vertically oriented scale. An on/off switch and a red, bejewelled power lamp complete the front-panel’s controls and indicators. The rear panel carries the balanced XLR connectors of the single-channel mic input and line-level output, together with a fused IEC mains socket, which [on the European-market model supplied for review — Ed.] is marked as 240V and bears the exhortation to use only a 230V fuse, thus neatly covering the EU harmonised supply of a nominal 230V ±10 percent (207-253V). 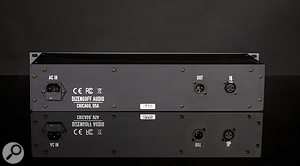 There’s little to see around the back: just the IEC mains power inlet and a pair of XLRs for the audio input and output.Internally, the DA2’s circuitry sits on two separate boards, one carrying the power supply and the other all the audio circuitry. In what Newport might describe as a ‘Chicago Twist’, the power supply is based around a Nippon Steel R-core, in which the core laminations are made up of one continuous, variable-width strip of steel that’s wound to form what might best be described as a ‘rectangular doughnut’. R-core transformers are more compact than the more common E-I or toroidal equivalents, and their low power loss, high efficiency, low stray magnetic flux and low noise level make them ideal for high-end audio applications.

The audio circuit board is dominated by a pair of black, metal-jacketed, Russian-made 6SJ7 pentode tubes that, as in the BA-2C, run in triode mode. This tube is basically identical to the original’s 1620 pentode, but with the grid cap connection moved to a pin. The DA2’s Chicago-wound signal transformers are based on early Peerless designs and, for maximum fidelity, the input transformer is wound on a core with a high (80 percent) nickel content, whilst the output version uses a core with less (45 percent) nickel. The quality of these transformers, and the overall circuit design in general, is reflected in the DA2’s specified (though unqualified) frequency response of 10Hz to 50kHz. The Dizengoff DA2 also comfortably outclasses its inspiration in performance with figures (for a 10Hz to 24kHz bandwidth) of 1 percent THD+N at +4dBu output and of -82dB (A-weighted) SNR at +50dB gain.

With the DA2, there’s nothing complicated to set up. The front-panel VU meter appears to be calibrated to give the standard +4dBu output at 0VU — and as that’s what my studio is aligned to, all I had to do was to plug in an instrument or mic, switch on phantom power where necessary and wind up the DA2’s input level. The first thing that struck me was the extremely low level of background noise, even at the unit’s maximum 52dB gain (which, incidentally, is exactly the same as the RCA BA-2C). For a tube microphone preamplifier, the Dizengoff DA2 is impressively silent. In addition, its headroom is extremely generous, as I found that I could pin the VU meter against its end stop without hearing any unwanted distortion on the output.

For me, the whole point of a tube preamp is the sense of smooth warmth and weight that the best can deliver when driven and, with its high headroom, the DA2 didn’t disappoint in this regard. At low gain levels, it delivers an attractive, clean, clear and well-balanced sound that has a hint of bite in the mid-range and that gains an increasing overall sense of warmth, width and stature in the low mids and bass as the input gain is increased. To me, the attraction of the DA2 lies not only in its sonic character, but also in the way that you can work with it intuitively. Close your eyes and play with the level of gain until you hear the sound that you want — it’s that simple. As an early warning system, you’ll hear the clatter of the VU meter bouncing off its end stop long before any over-zealous distortions will upset you!

One downside of having only the original’s 52dB of gain to play with is that low-output microphones are not going to be able to drive the DA2 hard, so if you’re looking to obtain the warmth and weight that the DA2 is capable of delivering, it’s better suited to modern-day capacitor microphones, rather than vintage ribbons or low-output dynamics, especially. That said, the DA2 did extract a great sound from my Bang & Olufsen ribbon mic which I was running through a Cloudlifter booster — although, even then, I also had to increase the level of the recorded track in the digital domain.

Inserting a jack plug into the DA2’s high-impedance instrument input automatically cuts the signal from the rear-panel XLR. As with the microphone input, instruments could be either kept clean, with the mid-range ‘bite’ adding definition, or the DA2 could be driven hard to add warmth and weight to proceedings. As with the microphone input again, I found using an external preamp to push up the incoming signal level helpful, especially with single-coil pickups.

With the unusual inspiration of the RCA BA-2C behind it, the Dizengoff DA2 possesses a sonic character that I haven’t heard in any other tube-based mic preamp that I’ve tried. Adding its low noise floor, high headroom and wide frequency response to the tube and transformer-based distortion of which it is capable has resulted in a characterful mic preamp, and one that delivers an overall performance that makes its price point attractive to those looking to expand their available sonic options.

I suspect that most purchasers will probably buy a Dizengoff DA2 to complement their existing mic preamp(s) but, given its performance capabilities and my personal preference for hardware with character, I could quite easily see myself running a pair as my main mic preamps, and perhaps as the gain stage following a passive analogue summing mixer. You’ll need to make up your own mind on that sort of thing, of course — so do try to give the DA2 a listen next time you’re in the market for a new mic pre.

This tube-based mic preamp’s performance capabilities make it suitable for a high-profile role in a studio, rather than just being a source of colour and character.