Donner’s Island Delay is a multimode delay pedal with a maximum delay time of 1.2 seconds and 10 delay types on offer (Digital, Analog, Tape, Lofi Delay, Mod Delay, Ping Pong, Reverse, Deluxe Harmonic Delay, Shimmer and Tremolo Delay), as well as a 17‑second looper; a rotary switch determines the current selection. It requires a 9V PSU capable of 200mA or more (battery operation is not supported), and its stereo inputs and outputs can be used in any mono/stereo combination. 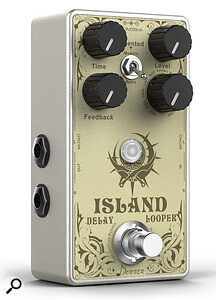 The single footswitch is used for bypass, looper recording and to tap the tempo. There are rotary controls for Time, FX Level and Feedback, while internally bypass can be set to True or Trails‑on. An interesting and potentially useful feature is the global Modern/Vintage switch, which adds ‘warmth’ in the latter position.

The basic delay types are fairly self‑explanatory, but it is worth mentioning a few key features. The Tape Delay mode has just enough added wow & flutter to make it sound nicely authentic. The Lofi delay uses bit‑reduction to add an almost ring‑modulator style flavour to the repeats. Reverse is rather more useful for me, but sadly there’s no way to kill the dry sound — so you can’t do the complete reversed guitar solo thing. Deluxe mode pitch‑shifts successive repeats up by a fifth and, as it includes the feedback path, the pitches keep on climbing, whereas Shimmer puts all the repeats up by an octave. Tremolo mode adds a very noticeable tremolo pulse to the delays but without affecting the dry sound, while the Mod Delay option adds a rather strong chorus‑like pitch waver to the repeats.

The looper is super simple and, as mentioned, has a maximum recording limit of 17 seconds, but it works well enough and allows new parts to be overdubbed on top of existing ones without much by way of noticeable degradation in the sound quality. Recording start and stop requires just one push of the footswitch, while pressing and holding erases the loop.

Any criticisms of this pedal have to be balanced against this pedal’s price, and other than the rather weird Lofi delay mode, my main ‘wouldn’t it be nice’ comment relates not to the quality of the effects but to their versatility — in particular, the inability to adjust the Mod and Tremolo effect intensities, and being unable to mute the dry sound in Reverse mode, which I found frustrating.

Other than the rather weird very lo‑fi delay, my main ‘wouldn’t it be nice’ focus relates not to the quality of the effects but to their versatility.

On the plus side, the delays generally work well and sound pretty good, and the background noise is low too. I especially liked the Tape emulation, with its subtle wow & flutter, and having a stereo output is great if you happen to use two amps or want to record direct to your computer and use a pair of amp simulators. The stereo input makes good sense when processing synths and the like too, or when placing the delay after another stereo effect. The Vintage switch does deliver the warmth it claims to, though some might describe it as a touch murky! Nonetheless, all the basic delay options sound very usable in both Modern and Vintage modes. If your priority is a workhorse delay with a long maximum delay time and a handful of other sonic options thrown in just for good measure, I can think of many worse ways to spend this much money.