For many years analogue synthesis either revolved around filtering harmonically rich sources or prioritised changing the shape of simple waveforms to add harmonics. The MÖG WF-1 Wavefolder from DPW Design doesn’t just modify waveform shape, it squishes, shifts, boosts and distorts — and is equally happy doing the same to control signals. 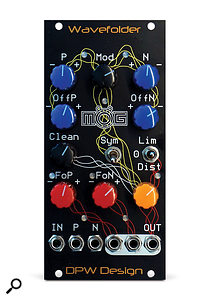 Size: 12HP. Current: +12V = 140mA, -12V = 140mA.In terms of wavefolding, both positive and negative sides of the waveform can be folded separately, with offsets (-8V to +8V, via the OffP and OffN attenuverters) defining the range covered by each. At fully clockwise, these knobs take the process out of range, but as you lower each, LEDs inform you that folding is taking place, green indicating positive, red negative.

If you’re lucky enough to have an oscilloscope in your system, now would be an ideal moment to hook it up and observe the folding-over of the waveform peaks. To start with, simple works best — analogue sines or triangles yield a rich bounty of pseudo-digital sparkle. Taking the offsets through zero is possible too, which you’ll appreciate when manipulating control signals.

A central Sym (symmetry) switch is used to disengage negative offset, meaning the positive values are imposed on both halves of the source wave. In practice, it’s not always possible to predict the audio effect of applying symmetry; it is highly dependent on the input, but I found it very striking on a selection of digital waveforms.

In addition to the blend of folded and clean signals, the module generates square waves whenever folding is active. Via two attenuverters (FoP and FoN), square waves may be added or subtracted to either the positive or negative sides of the waveform. The squares can be put to work either as regular audio or as gate sources (output +/-5V); more of those attractive tri-colour LEDs show the output and polarity of each.

Helpful wavy-line graphics indicate the flow across the module and the square waves are usually normaled into the mix — unless you tap them off via their separate outputs. It’s well worth trying this, panning them to either side of the central folded signal. Then, connect a free-running LFO to each CV input and sit back to admire the deep, mind-bending swooshiness of wavefolding with added PWM.

There’s a single DC-coupled input, plus CV inputs for the Positive and Negative attenuverters. DPW also make an expander module — the E-1 — in case that’s not enough, but it’s sufficient by itself for all manner of dynamic waveform morphing. Finally, there are a couple of tasty distortion circuits to explore. In the first, milder version, the output is amplified by up to five times then compressed by a limiter. Or, for a harder sound, distortion employs 20x amplification. If this type of mashing is as much to your taste as it is mine, the E-1 expander will be a vital addition; it’s attached to the WF-1 by a short cable and provides CV-activated distortion on receipt of 1V (or more). For adding punch to key notes in a sequence, I’d rate it as close to essential and further distortion flavours are obtained by modulating the toggling at audio rates.

The WF-1 is a rich-sounding tool for adding analogue wavefolding to any system. Fed by a single VCO, the module can produce a near-endless set of shapes, from subtle adjustments to mashed, compressed, bit-reduced and PWM-like modulation. And if you run out of ideas, the manual has a number of innovative examples, not least those that involve control voltages. It could easily earn its keep as a means of twisting and partially inverting LFO or envelope outputs. With all that in mind, I don’t have much in the way of criticism. OK, the jacks are a bit close together, at least for some of my jack leads, and I guess I’d have liked CV control over the fold/clean balance, but that’s about it. Tradition might suggest wavefolding as a means of livening up analogue waveforms, but it’s a great way to transform complex sources too. I had a long session auditioning its effects on the digital waves of my SE Quadnic module and fell in love all over again.