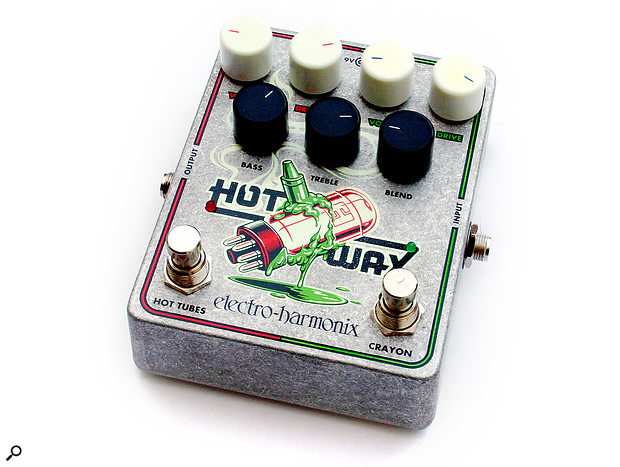 The Electro-Harmonix (EHX) Hot Wax is a dual overdrive pedal that draws upon and combines two existing EHX pedal designs, the Crayon and the Hot Tubes. These are arranged as two separate sections that can be switched on individually or used in combination, for when you need an extra helping of overdrive. While guitar processing is the most obvious application, the Hot Wax’s applications extend to bass, keyboards, and anything else you might wish to process.

While each section has its own footswitch plus dedicated Volume and Drive knobs, there’s also a common two-band bass and treble EQ, as well as a Blend knob that mixes the dry and distorted elements of the sound, and all three controls remain active when either or both distortion sections are engaged. Bypass mode is buffered, which is a bonus if the Hot Wax heads up a chain of pedals. Powering is via a standard centre-negative 9V power jack (there’s no battery power facility), and a suitable Electro-Harmonix 9.6DC-200BI power supply is included. But if you prefer to use a pedalboard power supply instead, you’ll need to know that the current draw of the Hot Wax is 75mA.

The Canyon is described as a full-range overdrive, as opposed to something mid-focused like a Tube Screamer, producing more edge to the upper reaches of the sound but also allowing it to process low-frequency bass sounds. EQ may then be used to shape the result.

As its name might suggest, Hot Tubes is more like a ‘pushed valve amp’ emulation; it uses a CMOS FET to provide distortion rather than clipping diodes. It goes from almost perfectly clean to a slightly hairy blues tone, and also doubles as a cleanish boost to push the front end of an amp. In its separate pedal incarnation it has a single tone control, but here it benefits from having both bass and treble controls. The Crayon section offers a wide range of drive and when combined with the Hot Tubes section it’s possible to coax some fairly heavily overdriven sounds out of the pedal — though there’s also a lot of subtlety to be had by backing off the drive controls and experimenting with the contribution of each stage.

When the Blend control is used, the tone controls have no effect on the dry portion of the sound, which is very handy: adding a little overdrive with the top rolled off into a mainly clean sound can add a sense of weight and energy without making the whole thing sound too dirty. The live applications are pretty obvious, but the Hot Wax could also prove a useful ally in the studio when DI’ing electric guitar or bass, as having a good analogue overdrive at the front end often leads to better results than relying on digital overdrive plug-ins. To sum this up in a couple of words then: very versatile.