Portable column-style sound systems have been around for many years, but US veterans Electro-Voice may have just perfected the art.

It seems that nearly every PA manufacturer is coming up with a mini column-plus-sub system of some kind, but when Electro-Voice join the party, you know they’ll come up with something worth looking at. Such systems are popular for some very good reasons — they don’t block the sight lines as much as conventional boxes, they are usually more portable, and their wide, shallow dispersion pattern puts more of the sound where you need it. The use of multiple small drivers also tends to help with vocal clarity.

With a total of 1000 Watts of Class-D power on board, split evenly between the sub and the mid/high column, the Evolve 50 can cover the frequency range 43Hz to 20kHz (-3dB) producing a maximum SPL of 127dB at one metre, which is pretty impressive for such a compact system. As with many of its contemporaries, the Evolve 50 includes a simple built-in mixer plus the ability to stream in audio via Bluetooth. There’s also a free app, QuickSmartMobile, that can control the main functions of up to six Evolve 50 systems at a time. Clearly a single column can only deliver mono sound but it is possible to configure a pair of systems for stereo music playback using a link cable.

The ported sub that provides the foundation for the system is built from 0.75-inch ply and houses a 12-inch speaker protected by a perforated steel grille. Three handles are provided for ease of carrying, which is welcome as the sub weighs a hint over 20kg. All the amplifiers and mixing facilities are built into the sub and I’ll look at those in detail shortly.

High and mid frequencies are handled via an 825mm-tall aluminium column housing eight 3.5-inch neodymium-cone drivers. The bottom third of the column is angled downwards to ensure even coverage near the front. The geometry of the column provides a 120 x 40-degree (horizontal x vertical) dispersion pattern to concentrate the sound where it is most needed. A handle is built into the rear of the column and both the column and its 929mm support pole are supplied in a robust, zip-up carry case that also provides room for cables. When loaded, the bag weighs under 8kg.

Assembly takes, quite literally, only seconds, as the pole, which is fully reversible, simply drops into a substantial recess in the sub and then the column slots on top. All the necessary cabling is carried within the support pole, which has built-in connectors and uses magnets to help lock it in place.

All the controls are integrated into the mixer section, which includes DSP for setting the voicing, making key adjustments and, in multi-speaker systems, entering any necessary delay to compensate for a maximum of 100 metres of spacing. A simple one-knob/turn-and-press system is used to navigate and adjust the DSP parameters.

Inputs to the first two channels of the mixer are via balanced XLR/jack ‘combi’ connectors that are able to accept mic or line-level signals. These have physical gain control knobs. Phantom power can be turned on independently for these two channels within the DSP menu, but only 15 Volts of phantom power is available. Most back-electret mics will be happy with that but some externally polarised capacitor mics may either work at reduced sensitivity or not work at all. 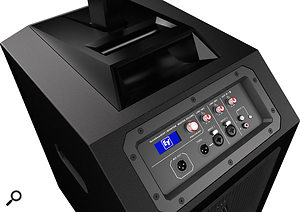 The inputs, outputs and DSP mixer all reside in the subwoofer base unit.Channel 3 is an aux input, with its own level control, designed to accept an external music source, which can come via Bluetooth, a 3.5mm stereo mini-jack or a stereo pair of RCA phonos. If two systems are hooked up, the Mix output, which is also on a balanced XLR, can be set to carry only one channel of the stereo input, enabling the combined system to play back music in stereo.

Using the DSP menu it is possible to select between four specific voicings: Music, Live, Speech and Club. I used the Live setting for my main tests as I wanted to see how the system performed as a live PA and this setting has the flattest response. There’s an overall three-band EQ with a sweepable mid offering a range of -12 to +6 dB, with the mid sweepable between 200Hz to 12kHz. The user can store and name (up to 12 characters) five custom DSP presets. In addition to adjusting delay and activating phantom power, the LCD also indicates the status of the system’s built-in limiter, showing when it is triggered. Should you push the levels too far and incur clipping, this is also flagged up on the display.

The Mix output sends a mix of all the channels, unless you reconfigure it via the DSP menu to do otherwise, whereas the Link-out XLR carries channel 1’s signal only. Bluetooth pairing for music streaming or app control is also handled via the DSP menu, and the app will only respond if one or more Evolve 50 systems are within range with their Bluetooth turned on. The iPad version of the app is free from the iTunes App Store and requires iOS version 10 or above. A version for Android Marshmallow (and above) tablets and smartphones is available from the Google Play Store.

The system really did only take seconds to assemble, with the finished column feeling solid and stable — add a power lead and a signal input or two and you’re up and running. The mixer doesn’t include effects so most users will probably need to plug in an external mixer or voice processor, as I did for my live gig test, but if you’re happy to keep things clean and don’t need more than two mic inputs plus a music feed, then the built-in mixer works fine.

Vocal clarity is excellent, with plenty of level in hand. Resistance to feedback is also better than from a conventional box speaker because of the wide dispersion. Feeding in full-range music makes the sub work for a living, which it does in an extremely capable way, adding depth and punch without turning everything to boomy mud. We took a single Evolve 50 system to a pub gig and used it to carry acoustic guitar, a bit of electric guitar (DI’ed from the back of my Roland Blues Cube), dual vocals and a beefy-sounding miked cajon. It sounded beautifully clear, giving good coverage over a wide area, and members of another band even came up to ask us about it in the interval as they were impressed by the clarity.

The sound heard from behind the column is, predictably enough, predominantly lows and low mids, though our vocalist thought it clear enough that he could manage without a monitor if necessary. The free app communicated with the speaker without any problems, though we didn’t need to use it as we were utilising a separate mixer.

To sum it up then, this is one of the more impressive column-plus-sub systems I’ve tested in this price band, as the sub is serious enough to handle a sensible level of clean bass, albeit at the slight expense of weight and size. The maximum SPL is also impressive, with feedback setting a limit long before the system runs out of steam in a typical pub/bar venue. There are cheaper column systems but this one more than delivers for the money. In fact my only comment is that I’d like to see a version with a 10-inch sub as that would make the system even more portable for those users who don’t need to handle quite so much bass.

While there are cheaper column speakers, this one handles the low end very well and is capable of slightly higher SPLs than many physically similar systems.