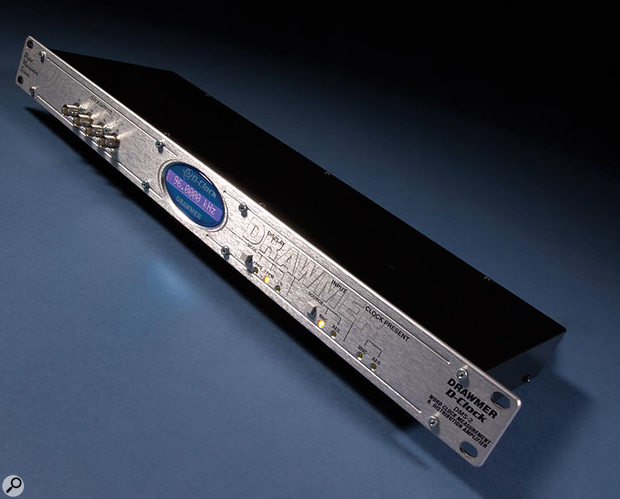 As we all acquire more and more digital audio equipment, clock distribution becomes more of a key issue. This new distribution amplifier not only delivers multiple word-clock outputs, but also offers real-time monitoring of the accuracy of the source clock signal.

Their latest digital product is a sister product to the M-Clock: the D-Clock word-clock distribution amplifier. However, in the same way that the M-Clock is not just a master clock generator, the new D-Clock is not just a clock distribution unit. It also incorporates a unique word-clock frequency measurement facility to display the actual clock rate and hopefully reassure the user that everything is working as it should.

Styled to match the M-Clock, the new D-Clock is housed in a 1U rackmounting case that measures 145mm front to back and weighs a modest 1.7kg. As you might anticipate, the rear panel is crammed full of connectors, starting with the usual IEC mains inlet complete with integral fuse holder. The internal power supply is a switched-mode design that can accept mains voltages between 85V and 250V, at 50Hz or 60Hz.

The D-Clock distributes only word-clock outputs, but the input reference clock signal can be supplied as either a standard word clock or as an AES-EBU signal. The word-clock input is connected via the usual BNC socket, while the AES input is hooked up with an XLR. Usefully, both inputs have associated 'zero-latency' loop-through outputs — in other words output connectors which are wired in parallel with the inputs. A pair of slide switches enables the correct impedance termination to be selected (75Ω for the BNC and 110Ω for the XLR). If left unterminated, the D-Clock inputs present a very high impedance to the signal which will not load the source. Thus the clock signal can be routed on to other distribution units from the loop-through connector. However, the last unit in the clock chain should be correctly terminated, of course, to prevent reflections back along the cable which could disturb or even destroy the clock integrity.

The majority of the D-Clock's word-clock outputs are presented on 16 individually buffered BNC sockets on the rear panel. In addition, there are four more BNC sockets on the front panel to make it easier to accommodate temporary equipment needing a clock reference.

The front panel is finished with a brushed-metal effect and contains a blue 'lozenge' logo in the centre to match that of the M-Clock. However, embedded within the lozenge is a very clear 16-character blue liquid-crystal display which provides the input's clock-frequency measurement. To the left are the four BNC clock outputs mentioned above, while to the right are two small square buttons and seven yellow LEDs.

The first button selects the LCD measurement mode, with LEDs to confirm the current status. There are three options, the first being the actual clock frequency, shown in kilohertz to four decimal places — for example, '44.1000kHz'. The second mode shows the assumed nominal clock frequency, with any error given as parts per million — such as '48.0k +00001ppm'. The third and final mode provides the nominal sample rate again, but with any error shown as a percentage — '48.0k -00004%'. The D-Clock remembers the selected display mode when powered down and restarts in the same condition. The display accuracy is to 0.1Hz or 2ppm (according to the display mode) at all clock rates.

The second button selects the required input clock source: either the word-clock input or the AES signal, again with LEDs to confirm the current status. The final pair of LEDs simply register the presence of a valid clock signal on each input. It's picky of me, I know, but there is an inconsistency in nomenclature here. The panel legends refer to the clock input options as BNC and AES — where the first refers to a style of connector and the second to a signal format. A pedant would insist that the panel should therefore read either BNC and XLR, or Word Clock and AES — the latter being the technically correct solution. Still, I think we all know what is meant and this is a very trivial point...

Although the D-Clock is clearly styled to match Drawmer's M-Clock, it can be used equally well with any master word-clock generator: it is a simple word-clock distribution amplifier, after all. Connecting the unit to the clock source and other equipment is child's play, as it simply involves plugging in BNC cables, and the only configuration required is to select the clock source and input termination.

The specifications given in the handbook don't list the propagation delay through the unit, but from the word-clock BNC input it is an insignificant 35ns. The decoding involved in extracting the embedded clock from the AES input imposes a slightly longer delay of 175ns at 48kHz (125ns at 96kHz), but again this is insignificant. The AES specifications require a phase synchronisation between clock signals within a quarter of a word-clock frame, which is 5000ns at 48kHz — something which the D-Clock achieves easily.

The D-Clock can distribute (and display) any clock frequency between 32-768kHz when using the BNC word-clock input, although the AES input can only accept sample rates between 32-192kHz. The clock-rate display is obviously only as accurate as its own internal reference, but Drawmer have used a similar temperature-compensated crystal oscillator to that employed in the M-Clock, and every unit is calibrated against a Prism D-Scope at the factory.

Being able to view the clock rate in three different ways is useful, although the raw rate display will probably be the one most people will use. However, the parts per million error display is handy for revealing the size of any rate errors in a more meaningful way, and the percentage display makes life much easier in the audio-for-video environment where complicated 'pull-up' and 'pull-down' rates are required to accommodate film-to-video transfers and 30fps-to-29.97fps NTSC frame-rate conversions.

My own semi-permanent digital rig is not really large enough to require a clock-distribution unit — there are enough outputs on the master clock unit itself — but I rigged the D-Clock to clock the entire array in order to make sure everything behaved as it should. The connected equipment consisted of a Yamaha DM1000 mixer, a Genex 8500 hard disk recorder, Drawmer Masterflow DC2476 processor, Roland M1000 line mixer, Focusrite ISA428 preamp with A-D converter, and Apogee PSX100 converters. I used mainly VDC word-clock cables and, needless to say, everything worked exactly as expected.

As a clock source I used both my own Drawmer M-Clock (which normally acts as a local clock source for my SADiE DAW), and an Aardvark Aardsync II. The M-Clock can generate clock rates up to 96kHz plus Superclock — although at roughly 11MHz it's not surprising that the latter was not recognised as a valid reference by the D-Clock! It was interesting to note that the 44.1kHz and 88.2kHz rates from my M-CLock were indicated on the D-Clock as having a -2ppm error and raw rate readings of 44.0999kHz and 88.1998kHz, whereas the 48kHz and 96kHz rates (which are generated by a second crystal in the M-Clock) were both spot on, occasionally tripping the display to show a momentary +0.0001% error.

Overall, the D-Clock works extremely well, and the unique display provides useful reassurance that all is working as it should be. If you can make use of up to twenty word-clock outputs in your digital environment, this is a very cost-effective and useful item to add to your rack.

A novel word-clock distribution amplifier with the added value of a clock-frequency display. Accepting both AES and standard word-clock references, the D-Clock provides twenty buffered outputs, plus loop-throughs of both sources and selectable termination modes.