If you want to create a surround soundtrack for your DVD while avoiding the limitations of Dolby AC3 audio, DTS’s clever High Resolution format has a lot to offer. 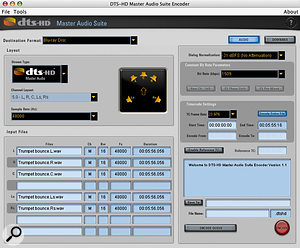 The DVD–Video format requires that audio be supplied as either an AC3 Dolby Digital stream or a PCM stereo audio stream. However, if disc space is available, there is also the option to add a second stream in a format called DTS. Like AC3, the DTS format is data–compressed, but it has the potential to offer much higher sound quality.

The DTS format is very clever. The basic Core Stream can support (compressed) data rates of up to 1.509Mbps with a sample rate of up to 48kHz. However, DTS have also designed extensions to deliver extra levels of quality. These are DTS–ES, which offers 6.1 by adding a centre surround channel, and DTS 96/24k, which is still 5.1 but with a maximum sample rate of 96kHz. The introduction of high–definition DVD formats such as Blu–ray and DVD–HD means there is space for even higher–quality audio options, and so DTS have added two further extension options to their format.

Cleverly, the extra layers, or extensions as DTS call them, do not duplicate any information in the Core Stream. The HD encoder takes the Core Stream, compares it with the uncompressed input, and produces a ‘difference’ signal made up of the information that was thrown away by the lossy compression. The DTS–HD decoder then takes the lossy Core Stream and the HD Master Audio stream, and combines them into an output that is identical to the original uncompressed studio output.

This technique has been brilliantly engineered to guarantee backwards compatibility, because the Core Stream is still playable on old decoders. For example, if an end user has a Blu–ray drive in a Sony Playstation 3 but hasn’t bought a new audio receiver with the new decoders in it, he or she can still view the HD content using an HDMI connection to their high–definition screen, while taking the digital audio stream from the Playstation 3 and decoding the 1.509Mbps Core Stream to get 5.1 surround audio at 48kHz.

In this review we’re looking at a suite of software that allows you to work with DTS and DTS–HD format audio in your computer. There are three components to this suite: DTS Encoder, DTS StreamTools and DTS StreamPlayer. This last replaces Neyrinck’s Soundcode DTS StreamPlayer plug–in, which was bundled with older versions and is still available from Neyrinck themselves (see ‘Soundcode DTS StreamPlayer’ box). The current version 1.5 runs on Windows XP and on Intel Macs only; my tests were done with v1.1 on a Power PC Mac.

The Encoder software is very intuitive to use. You can set the Destination Format (Blu–ray, HD DVD or DVD) from a drop–down menu to suit the various formats, along with the desired format for the stream. Then you select the speaker layout that was used to mix the files to be encoded, set the sample rate for the stream, and import the source files to be encoded. You can do the last by dragging and dropping files onto the appropriate file–name boxes, or from the navigation window that opens when you double–click on the empty file–name box. However, this is not the normal OS navigation window: as this is a Java application, it talks to the Mac in Unix, and it took me a little while to work out that I needed to go to the Volumes folder to access my various hard drives.

The second page of the Encoder screen is for configuring the downmix settings. The top half of the window is for downmixing to 5.1, and only becomes relevant when the speaker layout has been set at more than 5.1. The lower half relates to downmix settings for the 2.0 (stereo) mix. These settings control how the DTS decoder in the consumer’s equipment manages the downmix. It is also possible to embed a downmix into the stream, but this will take additional disc space and stream bandwidth.

Other settings you can control in the DTS decoder include Dialog Normalisation. This has has no effect on the encoding or decoding process, but instructs playback equipment to adjust the audio level after decoding. A single Dialnorm value is applied to an entire programme. Dialnorm can only attenuate — there is no compression involved in this process — and all channels are affected equally. The Dialnorm value entered into the encoder is the subjective average dialogue level of the programme, and this subjective average dialogue level is typically based on an LeqA measurement.

You can set the bit rate for the (legacy) Core Stream. When encoding for HD discs it makes no sense to reduce this at all, as the maximum setting will enable legacy users to get the maximum quality possible. The stream timecode format should be set to the same as the video format, such as 29.97 for NTSC video. You can then set the timecode start and end times if required.

Finally you set the location to save the encoded stream and the file name. Now all you need to do is hit the Encode button and the files are encoded in the background. The Encoder uses a queue system, so while the first set of files are encoding you can be setting up the next.

As of v1.5, the Master Audio Suite includes its own stand–alone decoder utility.A decoder such as StreamPlayer or the Neyrinck plug–in is very useful for checking how your DTS mixes will sound in the different formats. It was especially interesting to compare the Core output with the Master Audio uncompressed output. My test file was a live recording of a classical concert for string ensemble and solo trumpet. I struggled to find any artifacts at all on the Core output, but it did have a small but definite narrowing of the surround image, especially at the front. The Master Audio output was perfect, as a lossless process should be. The stereo downmix worked well too, justifying DTS’s philosophy of using a single stream, with the decoder in the consumer’s equipment picking out what it requires to play the appropriate format, rather than having a number of different formats encoded separately on the disc.

DTS are extending this ‘one stream’ philosophy to things like directors’ commentary versions, where the documentary is on the disc as a separate stream but control information can be encoded so that the main stream is ducked by the commentary feed, with the consumer’s equipment responding to automation information. This is a lot less data–intensive, and more efficient for the mastering house, than having to create yet another audio stream that has to be encoded and squeezed onto the DVD disc.

With all their experience in producing encoding algorithms to combine audio quality with practical data rates, and their support for backwards compatibility and ‘one stream’ philosophy, DTS have produced an excellent set of tools to enable you to produce DTS–encoded content for DVD, HD DVD and Blu–ray.

By the time you read this, version 1.5 of the DTS–HD Master Suite will be available, with a number of additional features. There will be the option to save and recall a range of settings, so you don’t have to run through all the drop–down menus every time you want to encode a file. There will also be options for encoding secondary audio streams such as directors’ commentary tracks.

DTS will also be reinstating the option to create a stream that can be burnt on to an audio CD and then played on a CD or DVD player, using a digital output to route the stream to a suitable decoder. This is very useful for sending out approval mixes without having to author a DVD. 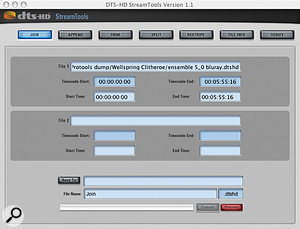 The DTS StreamTools utility allows you to edit streams that have already been encoded, so you can make changes without having to re–encode the entire project.The second utility in the package, DTS StreamTools, is, not surprisingly, a set of tools for handling previously encoded streams. These make it possible to join, append, trim and split streams without having to re–encode the source files, which can speed things up when, for example, a small section of a project needs to be changed. It is possible to change the timecode format of an encoded file without having to re–encode the entire file — all this does is change header information in the stream file — as well as read and check all the metadata in the encoded files, and Verify an encoded stream file.

An alternative to DTS’s own DTS–HD StreamPlayer is Neyrinck’s Soundcode DTS StreamPlayer Pro Tools plug–in, which was originally bundled with the Master Audio Suite but is now only available direct from Neyrinck. It can play back the DTS–encoded file in sync with a Pro Tools Session, decoding it in real time; alternatively, if your system cannot cope, the Audiosuite version can decode the files off–line and create a set of WAV files. Either way, you must double–check that the Session timecode format is the same format as the stream. The Audiosuite plug–in requires at least a 5.1 track in Pro Tools, so in order to use it within a 5.0 Session, I had to change my I/O Settings and create a new 5.1 path with a 5.0 sub–path; this was a pain, but at least not an insoluble problem.

The RTAS decoder is capable of surround decoding with a Pro Tools LE or M–Powered system, as long as six or more outputs are available, although the DV Toolkit is necessary to enable timecode features. As in their Mix 51 surround mixing system for LE, Neyrinck have cleverly got around the lack of surround–format tracks by using a feature normally used in instrument plug–ins for routing additional outputs to auxiliary tracks. After you put the LE 5.1, LE 6.1 or LE 7.1 decoder on a stereo track, the additional outputs become available as inputs on Aux tracks, so once you have picked up the other surround channels on Aux tracks and routed their outputs appropriately, it is possible to use an LE system to manage the quality control of a surround project — very clever. However, the Audiosuite version doesn’t work on LE systems, as you cannot create surround–format tracks in an LE Session.

An excellent suite of tools to encode, manage and decode for quality control the production of DTS–encoded audio streams for DVD authoring.