Frustrated by communication breakdowns in the studio? This clever plug‑in is designed to help non‑technical musicians convey what they're after to engineers. 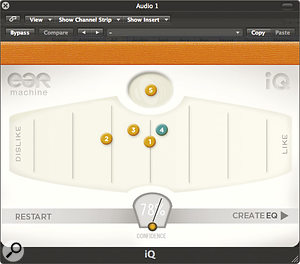 The iQ plug‑in presents the user with a series of level‑matched, 'blind' EQ settings, which are then dragged with the mouse to the right or left of a central line to indicate how much you like or dislike them.

In a world of endless choice, it is the process of decision‑making that can help separate the wheat from the chaff. Ear Machine, a global group of musicians, scientists and engineers led by psychoacoustics researcher Andrew Sabin, aim to help educate you into being able to make decisions not only for yourself but for others, using their iQ intelligent equaliser plug‑in. Their aim, claims Mr Sabin, is "to help engineers communicate more easily with their clients, and to help beginning audio engineers figure out the sound they're looking for”.

The idea had sprung from a problem that has arisen in studios ever since the beginning of the recording age: how can you best describe a sound when you have no technical vocabulary to do so? It's a situation all engineers have been in, where a musician is frustratedly trying to explain to you the sound he or she is after, but lacking your ability to describe it in terms that relate to technology, can only abstract. I have been asked to make things more "pinky blue”, "Castrol GTX'y” and Mr Sabin's favourite, "buttery”. So, to help bridge the gap between the engineer and the tongue‑tied musician, Ear Machine have come up with a neat little plug‑in called iQ.

With iQ, which is available in VST formats on Mac OS and Windows, and as a Mac AU, users indicate how much they like each of a series of example settings by arranging dots from left (dislike) to right (like), where each dot represents a different EQ setting. The plug‑in uses a model of auditory perception to gradually home in on the user's preference. A meter at the bottom of the window indicates when iQ thinks it has learned what the user wants. The user then clicks 'Create EQ', and iQ's recommendation is displayed in a traditional equaliser window.

It all sounds deceptively simple, and in many ways it is. To start with, iQ presents you with a series of extreme settings, which gradually get more subtle as it learns which way you prefer to lead it. When its confidence meter reaches 100 percent, the Create EQ button reveals the fruits of your hard work in a traditional three‑band equaliser window. You can also display any of the settings it tries out during the process, by double‑clicking any of the dots. 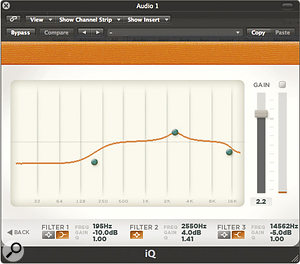 You can double‑click on any iQ setting to see the actual EQ curve it has generated. It was 100 percent confident I would like this one!

So will this plug‑in provide you with the perfect EQ for every situation? The answer is no, but I don't believe that is its intention. It is more a tool for education and instruction than for application. What's important is how it can demonstrate to you, or others, the thought process involved in achieving a favourite sound. In other words, it's about the journey more than the destination. From this point of view, it's a great idea for inexperienced engineers getting to grips with frequencies and equalisation, as well as for non‑technical musicians.

I tried the plug‑in first on whole tracks, so I could judge what was actually happening. I loaded a WAV file of a Rickie Lee Jones track that I have used as a reference for vocal definition for many years. What would iQ do to improve an already well-mixed track?

The first dot that appears is a flat EQ, which I dragged to the middle. The second dot produced a muddier version of the original, and double‑clicking revealed an EQ curve with pronounced low‑end gain and upper‑mid dip. This dot was placed firmly into the 'dislike' area and the next appeared. Clicking on it, the sound changed to a low‑end shelved, fizzy version of the same. Another dot placed in the 'dislike' section, and at this point iQ was still displaying zero confidence in its ability to predict my choice. The next dot was much better, with a slight high‑end tilt and low‑end boost. I placed it in the middle of the screen but just into the 'like' section. My confidence meter leapt to 78 percent!

The next dot seemed to be much the same, but with even more pronounced highs. I didn't like it, but didn't feel I could banish it to the 'dislike' side, so dropped it just beside its predecessor. The plug‑in now thought it could read my tastes with 98 percent confidence. I wasn't so sure...

Dot six had a pronounced mid‑frequency peak, and went firmly into the middle of 'dislike'. My rating dropped to 83 percent. Dot seven returned to the safe ground of the sound of dot five, and double‑clicking revealed almost identical shapes. I continued dropping dots and choosing until I received the 100 percent rating on dot 13. Unlucky for iQ, this wasn't the one for me, with a bass roll‑off, pronounced mid‑range peak and high‑frequency shelving boost. Its rejection dropped me back to 84 percent.

Maybe I was over‑listening. I am, after all, an experienced engineer: was I the wrong person to undergo this test? I decided to choose a novice to assist me, in this case my son James — a keen musician and dab hand with GarageBand. Once again, dots appeared and were placed on the like-to-dislike table until 100 percent was achieved. Interestingly, a similar number of choices were made, and the favourites all had similar-shaped curves. By examining the final choice, I was able to deduce that what my novice was searching for was a slightly bassier, less harsh version of the original. It took only a few minutes, and I was not involved in the decision‑making but I was able to look at what pleased or displeased. In a client situation, this removal from the process can help to defuse arguments and confrontation, empowering the client — but only if the process is completed and you take heed of what is learned!

One important feature is that iQ automatically varies the gain to match the curve, ensuring that you are listening to changes in timbre and sound, not volume. This is something that is hard to do with conventional EQ, but very important when evaluating different settings.

So is it useful? After initial scepticism, I would say yes! Should every commercial studio have it? Maybe! Anything that helps to mediate between the client and the engineer is useful if both are able to have an open enough mind to accept the results, or at least the process. I can envisage many situations where it would be a great help, and for a young engineer, it would be a great way to learn what EQ does and how the decision‑making process works.

The plug‑in itself, although a perfectly workmanlike three‑band EQ, is not going to be your go‑to mastering or channel equaliser. There are many more EQs out there that perform the task in a more musical or precise way, but as a stepping stone to these, it could prove invaluable.

Is it worth the money? Yes, I think it may well be. There will be a time in a session where you do not have the energy to find out what the guitarist actually means when they ask you to make it "more toppy but without adding treble”. Drop iQ on to the channel, sit down with a cup of tea and a biscuit, and leave them to their own devices — that's got to be worth $20 of any engineer's cash!

I can't think of any other plug‑ins that allow the user to hone his or her EQ preferences in this way.

This EQ probably won't put your Neves and APIs out of commission, but it might improve your relationship with paying clients!