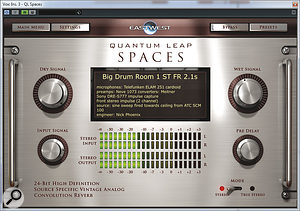 If there's one criticism that is most often levelled at convolution reverbs, it's that they lack character. Perhaps because they are usually based around a single, static 'sample' of a real source, many people feel that convolution reverbs sound a little bland or sterile when compared either with the rooms and plates from which their impulse responses were obtained, or with old‑style algorithmic digital reverbs. A related complaint is that convolution reverb sometimes feels 'stuck on' to the source sound, rather than forming a natural blend or addition to it.

Various attempts have been made recently to try to impart more of an organic feel to convolution reverb. For example, Liquidsonics' modestly priced Reverberate and the latest version of Audio Ease's Altiverb incorporate some clever modulation tricks, which aim to recapture some of the sense of movement and life that real spaces and plates bring. EastWest's Quantum Leap Spaces takes a different tack, focusing on the impulse responses themselves rather than the algorithms used to apply them to your music.

Its USP is encapsulated in the phrase 'source specific'. Instead of recording generic 'samples' of each space, producer Nick Phoenix set out to capture the reverb that would actually be heard by the room mics on a particular instrument. So, for example, to capture the ambience of the EastWest Studios drum room, he placed ATC speakers where the kit would be set up, and fired them directly at the microphones, so that they 'heard' exactly what they would do if serving as room mics on an actual drum recording. Likewise, some of the impulse responses intended for pianos and orchestral instruments were recorded by setting up multi‑speaker arrays that replicated the positions of those instruments within the hall, and the directions in which they radiate sound.

Phoenix also used recording chains and high‑end vintage gear that would be typical for a particular source: many of the IRs were, for instance, captured with Neumann M50s and M49s, or Telefunken ELAM 251s. The bulk of the library supports true‑stereo operation, and many impulses were recorded as eight channels for true surround reverb.

QL Spaces is available in all major plug‑in formats on Mac and PC, although the Mac version is currently restricted to 32‑bit operation. It is authorised to an iLok key, and if you buy it online, the download is just over a Gigabyte in size.

The Spaces front panel is disarmingly simple, with large rotary level controls for input level, wet and dry levels, and amount of pre‑delay. And that, it turns out, is that: there's no EQ, no envelopes, and none of the means of trimming or stretching impulse responses you'll find on nearly all conventional convolution reverbs. Spaces' library is stored in a custom format that can't be read by other convolution plug‑ins, and nor is it capable of importing third‑party IRs.

Whether or not you like the concept of a convolution reverb designed for specific sources, the design of Spaces and its preset library push you in the direction of using it that way. With no global 'wet solo' button, and all the presets featuring carefully balanced wet/dry settings, it's clearly intended for use as an insert on tracks or groups rather than as an auxiliary effect. And with so little user control on offer, the main user interface feature is its preset browser. There are five folders categorised by type of space; within these are further folders named after the spaces from which the IRs were taken, and some of these folders contain quite a few different impulse responses. The sixth folder represents an alternative way of categorising the same IRs: in keeping with the 'source specific' directive, it divides the presets into subfolders based on instrument and/or application, though in a rather idiosyncratic way. Categories such as 'Epic Film Final Verb', 'Soundstage For Thin Orch' and 'Solo Church Boy' probably don't address sources most of us use every day, yet on the other hand, it's not clear where to look if you want something suited to a humble acoustic guitar or snare drum.

Source For The Goose?

It sometimes feels like I've spent most of the last decade trying to squeeze the last drops of processing power out of unwilling CPUs, so the idea of using a convolution reverb as an insert effect feels positively decadent. Fortunately, EastWest's algorithm seems to be very efficient, because even my modestly powered laptop was usually happy to run as many instances of Spaces as I felt I needed. And it wasn't long before I felt I needed them quite a lot, because some of the reverbs on offer here are truly stunning.

The first source I tried Spaces on was a drum kit recording which had been made in a fairly dead room. Simply inserting Spaces over the drum subgroup and loading up a small drum room IR had an almost magical effect, adding size and weight and air to the sound without making it obviously 'reverb‑y' or boomy, or diluting the impact of the drums. So effective are they that you could probably use these IRs 100 percent wet to turn a dry pair of overhead tracks into room‑mic tracks — not something I've ever felt able to do with other reverbs.

The dedicated piano presets are, likewise, pretty remarkable, transforming even a bland sampled piano into something that feels compelling to play and listen to. Compared with a generic convolution reverb such as the Reverence plug‑in bundled with Cubase, there was simply no contest: Spaces felt alive, blending seamlessly with the source and still sounding great at both extremes of the keyboard. It isn't clear whether there is any clever modulation processing going on behind the scenes, or whether the magic is entirely down to the IRs, but there is a feeling of warmth and involvement here that is not often associated with convolution. A bonus is the inclusion of the aforementioned IRs from EastWest's own studios. In its previous incarnations as United/Western Recorders and Cello Studios, the famous complex of rooms built by Bill Putnam has served innumerable big‑name artists and recorded hundreds of classic albums. Spaces lets you feel your music enfolded in the warmth of Studio One, or given a shot in the arm by Studio Two's punchy ambience. There are even IRs of the studio's echo chambers, so you too can try to sound like Sinatra.

So are there any down sides? Well, although I understand the reasoning behind making this a preset‑only reverb, I don't think it would have hurt to add a global 'wet solo' function and a few extra controls, even if they were tucked away on an 'expert' page: surely 'source specific' doesn't have to entail 'completely inflexible'? Conversely, too, I think it's also fair to point out that the 'source specific' theme isn't always developed as fully as one might have wished. By far the most comprehensively sampled space in the library is the 'So. Cal. Orchestral Hall', where Nick Phoenix has taken the concept to its logical extreme and created different IRs for most of the major instruments or instrument groups in the orchestra. Not only do these correspond to the positions of those instruments on stage, but to the way in which they radiate sound, with speaker arrays set up to mimic the complex 'firing' patterns of French horns or trombones.

This must have required a huge amount of work, so it's perhaps understandable that the other halls, churches and sound stages haven't been covered in such detail; even so, many of them have only yielded one or two patches, and it's hard to see how some of the IRs here are 'source specific' at all. This is especially true of the European spaces, which were captured by other engineers: although they are all top‑class IRs, they would perhaps be more useful within the context of a plug‑in that offered more control.

When all's said and done, though, many of us don't want to spend hours tweaking reverb parameters, and the most important feature of QL Spaces is that it delivers great sounds without any effort on the user's part. As with anything that is basically preset‑only, there is an element of pot luck involved, and you won't always find the perfect reverb for every source here — but I'd be willing to bet that many of us will quickly find some firm favourites that get used on almost every project. If the aim is to provide warm, rich, organic‑sounding reverbs that really complement individual instruments, I'd say that EastWest's 'source specific' concept definitely delivers the goods.

There are lots of convolution reverbs on the market, and many of them have very nice IR libraries, but I'm not aware of any others that employ EastWest's 'source specific' concept. The idea of tailoring a convolution reverb to suit the position of individual instruments in the sound stage was pioneered by Vienna Symphonic Library's MIR, but the way it's implemented there is the polar opposite of EastWest's preset‑only approach.

If you thought you didn't like convolution reverbs, give EastWest's QL Spaces a chance. You might just be surprised!