Does this lunchbox EQ module have the same power to thrill as the original Harrison console that inspired it? 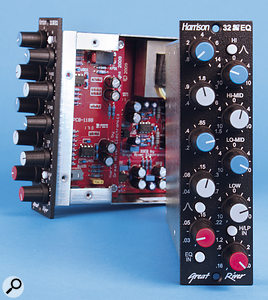 Celebrity endorsements seem to be everywhere these days, but when an engineer of the calibre and reputation of Bruce Swedien enthuses about the console he used on Michael Jackson's Thriller (and still uses today) you should probably take notice: "I miss [David Harrison] a great deal every time I reminisce about Michael's Thriller. I heard something in his wonderful 32C Series mixing desk that I hadn't heard before. The EQ of this warm‑sounding desk is fantastic. I simply love it!”

Those words go a long way towards explaining Great River's desire to work on creating a dedicated equaliser based on that console. The resulting module, the Great River Harrison 32 EQ, is intended to be a faithful recreation of both the four‑band proportional‑Q EQ section, and the 'parametric' (I'll come back to this term) high‑ and low‑pass second‑order filters of the console. To this end, Great River worked with Harrison's designers to ensure that all the console's EQ characteristics were properly replicated.

Coming in the increasingly popular API 'Lunchbox' 500‑series format, the circuitry is encased in a metal box, and everything feels solid and well built. The controls aren't overly crowded, and my not‑exactly‑slimline fingers could operate the knobs and buttons with ease. Speaking of which, on the front panel are rotary pots for EQ frequency and gain in each band, pots to control the filter frequency of the high- and low‑pass filters, with an adjacent filter in/out switch, an EQ‑bypass button, and two further buttons to switch the high and low bands between shelf and peaking types. Interestingly, there's also a jumper switch inside the EQ which allows you to change between a 'vintage' feedback design and a more modern, non‑feedback signal flow.

One disappointment when powering on was the lack of metering. You might need to set devices like this by ear, and you can always use your converter's meters if necessary, but a power‑present LED would have been a cheap and simple addition. Illuminated buttons, or adjacent LEDs would also have been useful for the EQ in/out, shelf/peaking and low-/high‑pass in/out switches: given the profusion of controls, it's a little difficult to see whether they're pushed in or not.

For those not familiar with the term, proportional Q means that each band's Q setting varies automatically with gain, starting off quite wide and gentle, and getting progressively narrower with more boost or cut. The result should be an easy to use and musically pleasing EQ that lacks the precision of fully parametric EQ, but is much quicker to use in typical tonal‑shaping situations when tracking or mixing. The degree of overlap in the four bands (see the 'At A Glance' box) also suggests that this EQ should prove useful for varied material.

I don't know how the high- and low‑pass filters can truly be 'parametric' when there's only one user‑adjustable parameter (the turnover frequency) for each. Perhaps there's something automatic happening behind the scenes: the slope is fixed at gentle‑ish 12dB/octave, so perhaps the Q is automatically varied to produce an LF or HF bump?

Great River sent a stereo pair of the Harrison 32 EQs, which I hooked up to my DAW and tried out on a number of sources in a mix I happened to be working on, which contained electric bass and guitars, lead and backing vocals, kick and snare, multi‑miked drums, several synths... and so on.

Like many people, I have neither the space nor the cash for a 32‑series console, but as a rough reference point I fired up Universal Audio's well‑respected Harrison 32C plug‑in, which is a model of the EQ on Bruce Swedien's console. Although I've not tested this plug‑in against the real thing, I've been impressed by its smoothness and the ease with which I seem to be able to sculpt sounds with it in the rock/pop material I usually work on. There really was no point trying anything like a blind test: you need to be able to control the EQ yourself when deciding how easy it is to use and what sounds best with it! The best I could do was to match the levels, try controlling the UA plug-in with a control surface (to take hardware control out of the equation) and compare the results and ease of use of the two processors.

The sound of the Great River equaliser is lovely. It's every bit as silky‑sounding as the UA plug‑in, but I found that it seemed somehow warmer and thicker, too — more 'creamy', if you like. It was also really intuitive to use, with the frequency knobs all in one column, and the boost/cut knobs in another, all of which made the task of dialling in a sound I liked really easy — as did the colour coding of the dials. Obviously, the proportional‑Q approach saves space, which is a must in a small format such as this, but another benefit is the speed of operation: if a manufacturer gets it right — and they don't always — you just don't need to think about the Q setting, and thankfully, that's the case here. The overlapping bands also make it very versatile, and usable on pretty much any source, which is what you'd hope for from a mixing-console EQ, I suppose.

In the mid‑range, the plug‑in seemed to behave more or less like the hardware — though, interestingly, I had to use slightly different settings on the two to get the same sort of result. The Great River unit sounded marginally more pleasant in the 'air' region, though, particularly when adding a high‑shelving boost.

One of the reasons for the Harrison console's strong reputation is the two filters, and it was here that I thought the hardware most outperformed the plug‑in. It's possible to push the filters into band‑pass‑effect territory, but the gentle slope means that they're particularly well suited to gentle tonal shaping. My dial‑tweaking was rewarded with beautiful results on a recorded electric bass that I just wasn't able to match using the plug‑in. It just sounded better. It's not just the filters, though: the warmth that this EQ imparted to what was originally a rather thin and brittle overdriven guitar part was lovely, and not quite recreatable in the plug‑in.

One screwdriver and eight rather stubborn screws later, I re-set the jumper switch on one unit to change it to feed‑forward mode and compare with the other. This setting, though adding to the versatility of the EQ, seemed less engaging and charismatic to my ears. It wasn't bad, by any means, but it was slightly cleaner‑sounding on bass and the low end of guitars and vocals. It's a shame that this change can't be achieved at the flick of a switch, though front-panel real‑estate is obviously hard to come by.

If you consider that the UA plug‑in was, and remains, one of my favourite software EQs for mixing duties, you'll begin to understand just how much I liked the Great River Harrison 32 EQ. Even the slight niggles discussed above disappeared in no time: after half a day's use, I became less frustrated by the lack of LEDs, as once the units are in the Lunchbox rack and known to be working, it's not a huge issue. The same goes for the jumper switch: once you've decided which setting you prefer, you'll probably leave it set permanently.

Choosing an analogue EQ is always going to be a matter of personal taste, so your mileage may vary — but I can't imagine anyone actually disliking the Harrison 32 EQ. The sound is pleasingly creamy and warm, and it seems to make rock and pop mixing effortless. What Great River have done is to take a well‑conceived, and revered piece of classic analogue hardware, and port it to a format that is more relevant these days than a large console, not to mention more affordable and more portable. The result is better than any plug‑in emulation, and it's also different from any other hardware EQ that I know of. That might not sound quite as gushing as Swedien's verdict on his own Harrison console, but it's actually high praise indeed. Thoroughly recommended.

While there are plenty of lovely‑sounding analogue EQs around, there really is no direct comparison. I suppose you could rack up some of the Harrison channels I've seen floating around on eBay. Aside from that, the plug‑in for the Universal Audio UAD DSP platform does a pretty good job.

This beautiful four‑band EQ with switchable high and low‑pass filters is better than any plug‑in emulation!