Sometimes less is more, and never is this truer than when recording overdriven tube amps at home — something the PicoValve makes easy... 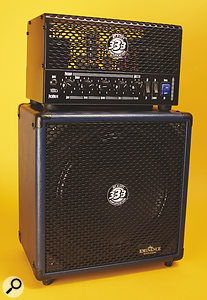 There's been something of a renaissance in the small tube‑amp market in recent years, and that's great news for anyone looking to record a good guitar tone at low volumes in a home- or project-studio setting.

Jet City are a relatively new guitar‑amp company, and they say that their philosophy is to deliver so‑called boutique quality at prices typical players can afford. They also inform us that Mike Soldano has joined their team, and he certainly knows a lot about amp design and manufacture. To quote the company, 'Jet City Amplifiers are designed in Seattle with a very simple "no bullsh*t” philosophy'.

The PicoValve 5W all‑tube amp should be well suited to studio recording at modest volumes — although with the right speaker it's probably loud enough for small gigs, especially if miked up. A matching Eminence‑loaded 12‑inch cabinet, the JCA12XS, is available if you don't already possess something suitable, and this includes the novel feature of a removable panel at the rear, so that it can work as either a sealed or open‑backed cabinet.

The circuitry was designed by THD owner Andy Marshall, and licensed by THD to Jet City, though, as with so many things these days, the amp is built in China to keep manufacturing costs down. The cage‑style enclosure is something of a THD hallmark, and allows unrestricted air flow around the valves. The power‑amp design allows the user to swap the power valve between a number of octal‑based valve types without the need to re‑bias the amp, so there's also scope for individual users to customise their tone. For example, you could experiment with an EL34 to try a more typically 'British' tonality, though I didn't have any spare EL34s with which to put this to the test.

Interestingly, the PicoValve also includes a half‑power mode, so that you can achieve power‑amp distortion at lower levels, and it has a full set of treble, middle and bass tone controls. Overdrive is adjusted in the usual way, using the preamp gain control to determine the amount of preamp distortion, and the master volume to set the loudness and degree of power-amp overdrive.

Like the Vox Night Train and the Orange Tiny Terror, the amp head is fairly compact. It has a metal carry‑handle on one end and the overall finish is matte black, with the circular Jet City 333 logo on the front. The standard valve line-up comprises a pair of 12AX7 dual triodes, and a single 6L6 power valve — and given that the 6L6 is rated at well over five watts, it must only be ticking over in this design. A peek through the grille shows generously rated power and output transformers, plus a power‑smoothing choke.

On the front panel you'll find controls for Gain, Treble, Middle, Bass and Master Volume, plus a switch that limits the power output to two Watts rather than five. There are also the usual power and standby switches, plus a 'bright' switch. In addition to the IEC mains inlet, the rear panel hosts three different speaker jacks for 4Ω, 8Ω and 16Ω loads, though there's no effects loop. 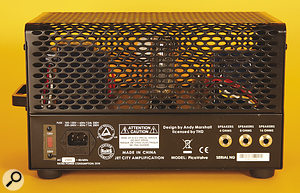 Separate outputs are provided for 4Ω, 8Ω and 16Ω speakers, which covers most bases.

As usual, my first test was to try the amp using single‑coil pickup instruments, in this case with both a Strat and a Tele. There's plenty of drive on offer, to get you into classic rock and raunch territory, with a nice, earthy blues tone available at medium gain settings, where the tone also benefits from a touch of valve‑amp compression. The sound cleans up nicely as you back off the guitar volume control, though for me the clean sound is rather short on shimmer, even with the 'bright' button in — but then my tastes tend to favour the jangly, AC30 Top Boost kind of sound. Where turning down all the tone controls on some amps results in no output, the tone stack allows some signal through on the minimum settings. As always, you have to experiment to find the tone-control 'sweet spot' that works with your guitar.

As expected, the sound thickens up when you use a guitar with humbuckers: you may need to engage that bright switch and turn up the top to keep the sound in focus. The amount of available overdrive also increases, as most humbuckers produce noticeably more output than single-coil pickups.

Switching to low‑power mode causes a bit of a 'splat', so it might be best done with the amp in standby mode — though the standby switch also creates a bit of a thump when turned on or off. To my ears, the low‑power mode sounds to be rather less than half power, and at this setting you can crank preamp and master volume controls pretty high up without making too much of a racket. I did, however, feel that the overall tonality was slightly better in the full-power mode.

Finally, the speaker plays an important part in shaping the tone of any guitar amplifier, and I found that the Eminence speaker used in the JCA12XS cabinet had something of a brittle edge to it. Those seeking a more British sound might do better choosing a Celestion, or other more 'comfortable-sounding' speaker.

As well as the gain, tone and master level controls, the PicoValve's control panel offers you the option of switching between 2W and 5W operation.

There are one or two other companies designing and building low-power amplifiers that lend themselves to recording applications. The hand-wired VHT Special 6 we reviewed last month, for example, is surprisingly affordable. But as impressive as that model is, it has a less flexible tone-control arrangement than the Jet City PicoValve, and only one preamp valve, which limits its ability to recreate high-gain sounds — so to compare the PicoValve on price with amps like that isn't really fair.

Though rated at only five Watts, the Jet City PicoValve is built as solidly as any full‑scale amp, and you get a full tone stack rather than a watered‑down tone knob. It wouldn't be my first choice for purely clean sounds — at least, not with the optional JCA12XS speaker — but for blues or classic rock tones it really does the business, and responds very nicely to picking intensity or guitar volume settings. And of course there's the option of using different overdrive pedals or treble‑boosters if you need to expand the tonal range. Importantly, the amp sounds good at reasonably low levels, so you won't have the whole street listening in as you try to nail that tricky solo.

Having no reverb and no effects loop is a little limiting, but for most studio applications you can easily use plug‑ins to add post‑distortion effects such as delay and reverb, with the added advantage that these can be in stereo. If you like old-school guitar sounds recorded the old-school way, using microphones, the Jet City PicoValve offers the real deal at less than the cost of some modelling alternatives.

There are now several low‑power valve amp alternatives at different price points, including the tiny 1W Rock Block from Surprise Sound, the Vox Lil Night Train and AC4TV combo and the Orange Tiny Terror. The less costly VHT Special 6 is also a contender, although it's better at the cleaner sounds and you may need to add the cost of a decent overdrive pedal to your budget if you don't already own one.

The Jet City PicoValve can produce a good range of blues and rock sounds at a sensible sound level, which makes it very well suited to recording applications.