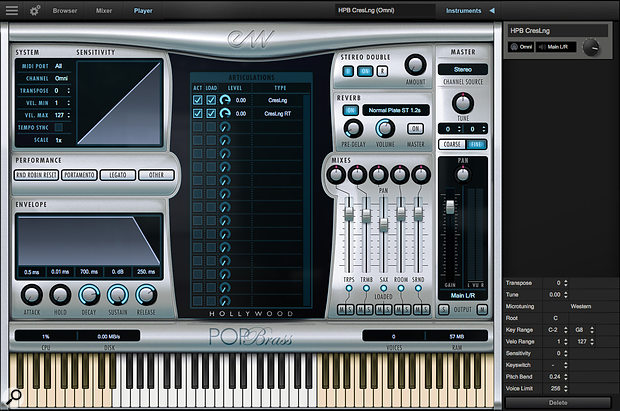 EastWest's Hollywood Pop Brass does exactly what it says on the tin.

A summer of releases for EastWest has reached its culmination with their latest effort, the Hollywood Pop Brass virtual instrument. This latest effort takes the engineering pedigree of Moogie Canazio (Diana Ross, Ray Charles, Sarah Vaughan) and places it squarely into the production realm of Doug Rogers and Nick Phoenix. The resulting product is a rollicking and vibrant instrument which still contains the attention to detail typical of Rogers/Phoenix productions, and is capable of rising to meet your own compositional and production goals.

The approach for Hollywood Pop Brass was to capture a small, tight and highly energetic horn section consisting of a tenor saxophone, two trumpets and a trombone. While the four‑piece ensemble is used in the main articulation folders, the pre-recorded licks instead utilise a five‑piece ensemble which adds an additional saxophone. In what is a supremely useful option, the instruments of the ensemble can be individually mixed in the mixer view. In the screen below, the sax spot mic is up with the remainder of the mics down. While there is still sometimes considerable bleed from the brass (proof that these instruments were indeed recorded as an ensemble), the ability to modify the already tight ensemble balance is beyond useful and effective.

Those familiar with EastWest instruments will feel immediately at home in the familiar folder structure. Beginning in the 'Sus' folder, we come upon a multitude of velocity-sensitive patches that can be played melodically as well as in different harmonic combinations. A 'CresLng' patch, for instance, presents a long crescendo whose dynamic range is dependent on initial velocity. Put through its paces, the preset sounded fantastic playing chords, slow melodic passages, parallel harmonies, and both diatonic and highly chromatic passages. In typical EastWest parlance, Patches marked 'Xfade' offer mod wheel dynamic control. The dynamic range and musicality of the swells here is truly impressive. While this is a brief criticism, the lowest dynamics are perhaps too strong or bright to be entirely convincing, while a much brighter and more appropriate dynamic layer begins around velocity #60. In larger groups and full mixes this is not noticeable (and may indeed help maintain presence in a mix), but in isolation it may bother some users. The clarion-like top of the dynamic range is bright in a way that is highly effective for the musical styles intended for this package. Let's be clear: this library's singled-minded aesthetic intent is to provide a powerful and even virile brass sound; there is little timbral subtlety to this instrument, and this is a good thing.

The staccato sustain patch gives a punchy attack and solid sustain. This simply glorious instrument yields complete realism in both staccato passages and enthusiastic chordal hits. The Sus folder is rounded out by various swells, crescendos and diminuendos for your crafting pleasure. It's only the first folder of this instrument, and already there is enough to get fully lost in.

The Short folder contains hard staccato, marcato, and 'stab' attacks, ranging from two to eight round robins. The round-robin patches pass the realistic repetition test with flying colours, while the repeating note instrument is a great choice to craft melodic and harmonic repeated double-tongued passages. 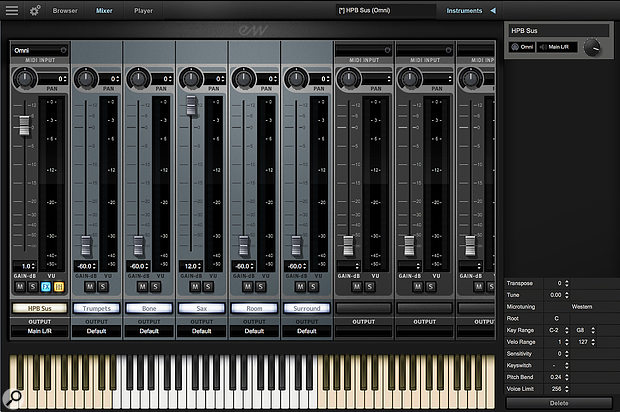 The Effects folder is where a new level of fun begins. This subcategory begins with three different sets of falls from short to long durations, which EastWest were thoughtful enough to provide with round robins. The 'growls' do just what one might expect, while the rips conveniently run up to the note that is pressed. Given the breadth of this library, one future update suggestion might be to include an even faster, 'split second' rip up. Finally, the highlight of this folder is probably the Trill patch (round–robin 2), an idiomatic ensemble gesture appropriate for a jazz tune, Latin work, funk, a Chicago-style jazz-rock tune or the next cartoonish Jetsons-like theme. One thing I discovered in experimenting with the trill patch is that it works effectively to create a legato line ending in a boisterous trill. So for instance, a rapidly played passage G-A-B-C passage (where the first three notes are fast 16ths and the last note is a held trill) generates a wonderfully evocative musical effect. Conversely in the trill patch, the same passage played as a series of rapid 16ths (with no final hold) gives the impression of a slight fall or shake up at the end of the passage. Intentional or not, these useful tricks work. 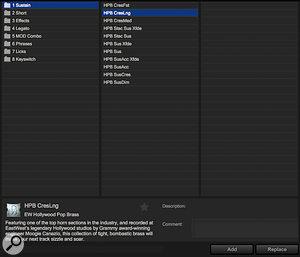 The folder structure for Hollywood Pop Brass.The Legato folder contains patches to be played one note at a time in order to achieve maximally realistic note connections in melodic passages. As is often the case with recent EastWest products, the Legato folder is really the engineering highlight of the package, and doesn't contain a single dud or filler instrument. The folder features a fast legato, a gentler 'smooth' legato, a middle-of-the-road-intensity general legato, and a staccato legato patch, each with a velocity-controlled and mod-wheel–controlled dynamic version. Each patch is highly playable, with the mod wheel dynamics strong both on held notes and in more rapid passages with dynamic changes over time. Another major highlight in this folder is the 'Stac Legato' patch, which successfully combines a punchy attack with a convincing legato connection, leading to a vibrant and powerful instrument that seems tailor-made to score a '70s hero/detective television programme intro, complete with idiomatic dips and rips between intervals a fifth or greater.

Hollywood Pop Brass 'Keep Off That Junk' by Nick Phoenix.

Can You Hear Me Now?

For those unfamiliar with recent EW products — or those for whom every instruction manual qualifies as TL;DR — the 'MOD Combo' folder may begin as a mystery. These polyphonic patches combine two or three particular articulations into a single preset, allowing you to switch between them mid-note using the mod wheel (as opposed to, say, a traditional keyswitch). So for instance, the very first patch — 'Cres MOD' — plays anything from a short crescendo ending in an accented release to a much longer version of this same gesture depending on how high the mod-wheel is set. The 'rips' preset in this folder allows you to change the style of rip in a passage based on mod wheel position, while the 'Sus_SusAcc_Stac_Sus' preset allows users to alternate between these three patch styles. For those looking to save on using multiple tracks and who don't mind the greater memory load, three or four of the MOD Combo presets could be combined into a comprehensive pop brass section.

In the final analysis, EastWest's Hollywood Pop Brass is both an immediately playable and infinitely layer-able beast of a virtual instrument.

As great as HPB is, we are still not in the era of a perfectly playable instrument. Therefore part of the craft of effective virtual instrument orchestration remains the interspersing of pre-recorded phrases and gestures with normal legato playing. This is where the 'Phrases' folder comes in handy. This large collection of pre-recorded phrases is both session tempo-sync'ed and acoustically matched to the regular playable instruments, allowing for seamless and easy layering. As if this wasn't enough, the 'Licks' folder contains RRX2 small gestures whose pitch content can be varied using the mod wheel. Within this folder is a sub-folder titled '_singles' which contains single chord hits and short repeated patterns on minor or dominant seventh chords. So, for instance, you can play a close or wide orchestrated dominant seventh chord, a short scalar lick up into that chord, rapidly tongued repetitions of that chord, the dominant seventh with an added ninth with a jazzy falling figure, and others.

The keyswitch folder allows users to load a keyswitch patch for either effects, or licks, or phrases, or a curated group of standard articulations. The latter patch may prove particularly useful for those using Hollywood Pop Brass in notation software or with Cubase's Expression Maps. That being said, it is disappointing that a wonderful engine like Play still does not allow for custom keyswitch maps. Whether or not the rumour that this is possible in the developer version of the application is true, it'd be a very welcome power-user addition indeed.

Finally there is the robust and stable Play interface with its onboard reverb, mixer board, envelope control and other powerful features. Users may also find themselves reaching for non-standard uses of such a package. For instance, I had great success in mixing this instrument into my existing 'classical' brass libraries, either to add a bit of bite or sizzle in a score, or by contrast to help create legato connections in otherwise nice-sounding packages that were challenged in this regard. When I turned down the sax in the mixer and went for an ensemble sound, I was surprised how quickly I was able to achieve a 'Drums Corps'-type of ensemble as well: placed in a stadium reverb, I felt like the Blue Devils were about to make an appearance in my DAW.

In the final analysis, EastWest's Hollywood Pop Brass is both an immediately playable and infinitely layer-able beast of a virtual instrument. Even experienced composers will have to budget many hours to plumb the depths of what is available herein, an investment they will likely find very worthwhile.

With hardly a thing missing and more to love than any composer could desire, this red-hot virtual ensemble is sure to be an award-winning hit.

$399 or via Composer Cloud subscription. Prices include VAT.

$399 or via Composer Cloud subscription.