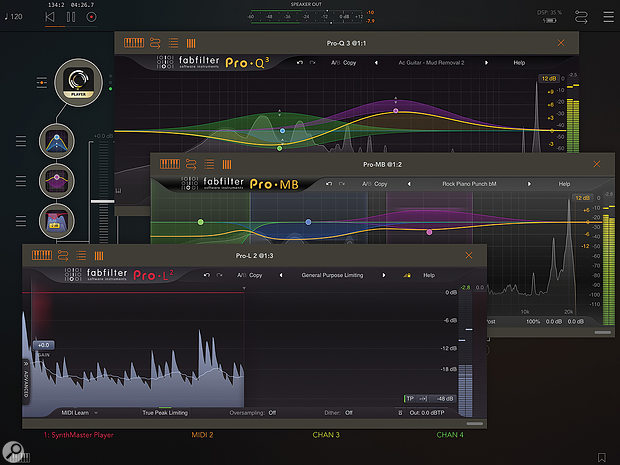 The FabFilter plug-ins for Mac OS and Windows seem to be universally praised by audio professionals for their sonic capabilities, their versatility and their super-slick user interfaces. But while probably familiar to most readers, their price means that the full bundle is a stretch for many hobbyists. But if your music-making workflow is centred on an iOS device, you can now pick up their Pro Bundle plug-in suite in app form for a fraction of the price of their desktop counterparts. When compared with typical prices in the world of iOS apps, this might still feel like a big investment — but these are not cut-down versions; it's the full-fat FabFilter experience with some modest UI adjustments to optimise the plug-ins for the iOS platform and touchscreen control.

So, what's in the bundle? The seven plug-ins include the Pro‑R reverb, Pro‑L2 limiter, Pro‑MB multi-band compressor/expander, Pro‑Q3 EQ, Pro‑C2 compressor, Pro‑DS de-esser and Pro‑G gate/expander. All are provided in an AUv3 format, so they should work in any suitable AU host, although the option to increase the size of the AU plug-in window within your host (offered by, for example, AUM, Auria or Cubasis) makes it easier to access the full control set for some plug-ins. I did the bulk of my testing in Cubasis and AUM, and encountered no technical issues other than that, as you might expect, these FabFilter plug-ins do place a little more load on your iPad's resources than the equivalent 'stock' plug-in.

I haven't the space here to describe the full operation of all seven plug-ins, so do check out the SOS reviews of the desktop versions of Pro‑R (March 2017), Pro‑MB (December 2013), Pro‑L2 and Pro‑Q3 (both April 2019) if you want more details. The same functionality is available under iOS, and I can echo what other reviewers have already stated; these are some of the most sophisticated, powerful and beautifully designed, software-based audio processors you're ever likely to use. 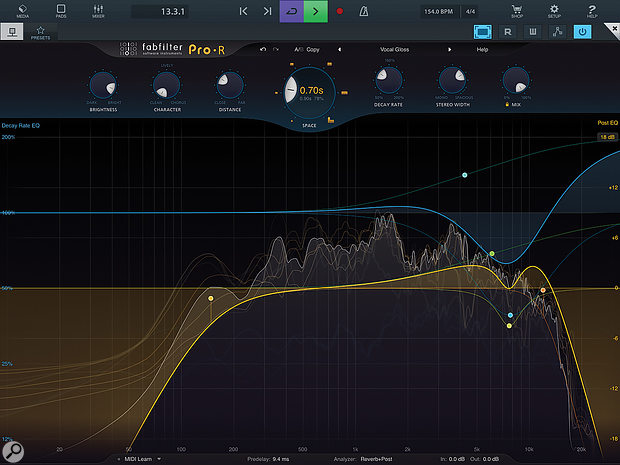 Pro‑R running full-screen as an AUv3 plug-in in Cubasis.

Of course, in different recording/mixing/mastering situations, you might find yourself reaching for some more than others. As a 'one reverb for any occasion', Pro‑R is a heck of a candidate. It doesn't attempt to emulate any iconic hardware reverb or to capture the sound of specific spaces but Pro‑R provides a massive range of treatments, from intimate ambiences through to cavernous halls, and it does that with some considerable style, both sonically and in terms of the control set presented to the user.

The GUI's upper portion offers access to a massive collection of presets and six macro-style controls. The latter combine the familiar (for example, Brightness and Mix) with the less common (for example, Distance, which seems to adjust the early reflections and reverb decay balance in a very effective fashion), while remaining very intuitive. Two EQ curves dominate the lower portion of the GUI. The Post EQ is a conventional six-band offering, but the Decay Rate EQ allows you to customise the rate at which different frequencies decay. Reverb decay varies by frequency in all spaces, but few other reverbs allow you to manipulate this in such fine detail. Incidentally, adjusting the control points of these two curves is one example of where there are operational differences between the desktop and iOS versions. For example, to adjust the Q setting for an EQ band under iOS, you have to double–tap and then drag up/down, and this is an action that takes a little getting used to.

When it comes to EQ and compression, Pro‑Q3 and Pro‑C2 are equally impressive. Pro‑Q3 offers up to 24 EQ nodes, with bell, notch, high/low shelf or cut and band-pass filter types. The GUI is informative and intuitive, and a pop-up panel gives instant access to the full control set for the selected frequency band. As with the latest desktop version, there's a per-node option for dynamic EQ, and there's an EQ matching function. This is up there with the very best desktop EQs, and it's undoubtedly the most powerful one I've ever used under iOS.

Mind you, I can say the same about the Pro‑C2 compressor. With eight different core compression styles suited to different applications, side-chain options, Mid–Sides processing options and underlying algorithms that can achieve high levels of gain reduction while retaining a transparent end-result, this is as good as compression gets under iOS. In fact, every one of the seven plug-ins in the bundle is at least as good as the nearest iOS competition, and in several cases they're streets ahead.

High-end processing options like these won't mask any technical weaknesses in your iOS recording chain — if you want the full benefit of the Pro Bundle plug–ins, the rest of your setup will need to feature some high-quality hardware (mics, audio interface, monitoring, etc). But if that's already in the bag, then this bundle will give you access to some genuinely professional processing at a fraction of its desktop price.